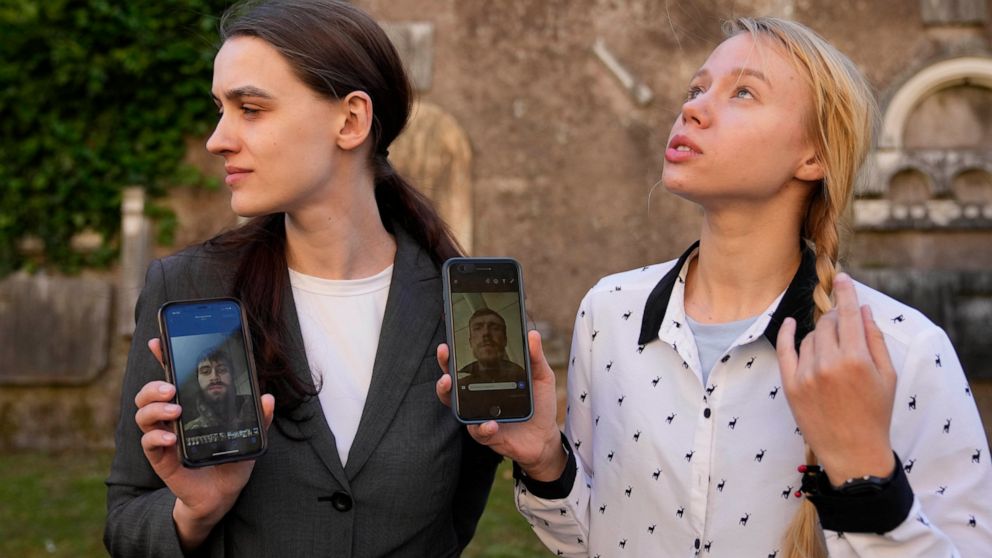 ROME – Two Ukrainian women whose husbands are defending a besieged steel mill in the southern city of Mariupol are calling for any evacuation of civilians to also include soldiers, saying they fear troops will be tortured and killed if left behind and captured by forces. russians. .

“The lives of soldiers also matter. We cannot just talk about civilians,” said Yuliia Fedusiuk, 29, wife of Arseniy Fedusiuk, a member of the Azov Regiment in Mariupol.

She and Kateryna Prokopenko, whose husband Denys Prokopenko is the commander of the Azov, made an appeal in Rome on Friday for international assistance to evacuate the Azovstal plant, the last stronghold of Ukrainian resistance in the strategic and now bombed port city.

An estimated 2,000 Ukrainian defenders and 1,000 civilians are hiding in the plant’s vast underground network of bunkers, which are capable of withstanding airstrikes. But conditions have become more dire, with food, water and medicine running out, after Russian forces dropped “bunker busters” and other munitions in recent days.

The United Nations said Secretary-General António Guterres and Russian President Vladimir Putin had agreed to organize evacuations from the plant during a meeting this week in Moscow, attended by the UN and the International Committee of the Red Cross. But the discussions reported by the UN concerned civilians, not combatants.

Speaking in English, Prokopenko, 27, asked for a Dunkirk-style mission, a reference to the 1940s World War II maritime operation in which hundreds of boats were launched to rescue more than 330,000 British and Allied soldiers besieged by German forces on the beaches of north France.

“We can do this extraction operation… that will save our soldiers, our civilians, our children,” she said. “We need to do this now, because people – every hour, every second – are dying.”

The women said 600 of the soldiers are wounded, with some suffering from gangrene. Videos and images they shared with the Associated Press showed injured men with stained bandages needing to be changed; others had open wounds or amputated limbs.

The women said the images were taken sometime last week. The AP could not independently verify the shooting date and location.

The men, who were not identified, say they only eat once a day and share just 1.5 liters of water a day between four. Supplies inside the blocked plant are running low, they say.

A shirtless man spoke in obvious pain as he described his injuries: two broken ribs, a punctured lung, and a dislocated arm that “was dangling from the flesh.” Another said he stepped on a mine that fell from a helicopter, leaving him with a compound fracture in his leg.

A military doctor who appears in the video identified herself as an anesthesiologist treating the wounded at the Azovstal factory. She said she was working with a small team of doctors “in extremely difficult conditions, under constant bombardment”.

“Our resources are extremely limited. Guys are literally dying before our eyes because we have no chance of evacuating them. There is no way to treat them properly,” she said.

She called for the evacuation of wounded soldiers, along with trapped civilians. “We just ask, we beg, to give at least the slightest chance to save the lives of these fighters. They deserve it,” she said.

The Azov Regiment has its roots in the Azov Battalion, formed in 2014 by far-right activists at the start of the eastern conflict between Ukraine and Moscow-backed separatists, which has drawn criticism for its tactics.

Fedusiuk said she and Prokopenko are seeking help from Europe, the United States and international organizations to find a diplomatic solution to the Azovstal impasse.

And she said the troops would never surrender to Russian capture.

“We don’t know of any Azov soldiers who came back alive from Russian soldiers, as of 2014, so they will be tortured and killed,” Fedusiuk said. “We know that definitely, so it’s not an option for them.”

Follow all AP stories about the war in Ukraine at https://apnews.com/hub/russia-ukraine.