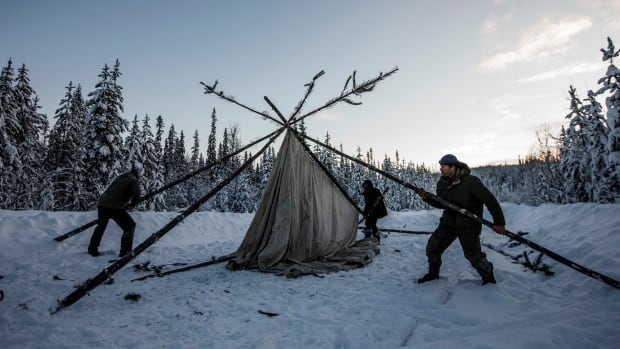 Members of the Wet’suwet’en Nation are suing RCMP and Coastal GasLink for alleged harassment they allege they suffered at the hands of police and private security, overstepping the bounds of an injunction guaranteeing the construction of a controversial gas pipeline.

In a civil action notice filed with the BC Supreme Court on Wednesday, two elders and one of the leaders of the protests against Coastal GasLink say they were subjected to a “relentless campaign of harassment and intimidation” in unceded territory adjacent to a forest road leading to the gas pipeline construction site.

Janet Williams, Lawrence Bazil and Molly Wickham – known as Sleydo’ – allege that the courts gave Coastal GasLink an injunction protecting road access, but that order does not allow the police to stop the Wet’suwet’en people from “using , occupy and reside in their lands”.

“There’s a stark contrast between enforcing an injunction and being in the territory for a specific legal reason and engaging in the types of behavior that they’ve had 24/7 for the last three months,” Wickham said. the CCB.

“We are seeking compensation from all these companies for the coercion and psychological damage and for the violation of our right to be in our territory and to participate in cultural practices.”

The 32-page notice of the civil claim centers on two locations along the remote Morice-Lamprey Village Forest Service Road and the Gidimt’en checkpoint.

The road leads to the site where Coastal GasLink is building a 670-kilometer-long natural gas pipeline that runs from near Dawson Creek in the east to Kitimat in the west.

The company has signed benefit agreements with 20 band councils along the project’s path. But Wet’suwet’en’s hereditary leadership says the band councils have no authority over land beyond the reserve’s boundaries.

The company won injunctions in 2018 and 2019 preventing supporters of the hereditary chiefs from blocking road access to the site.

According to the claim notice, the Gidimt’en checkpoint was created in December 2018 in a retreat 10 meters south of the Morice Forest Service Road as an “important symbol of Wet’suwet’en resistance to the pipeline project”.

The claim says the checkpoint comprises at least a dozen buildings, including cabins, canvas tents and kitchen facilities.

Lamprey Village is about 500 meters to the east and is being “occupied by members of the Gidimt’en clan in an effort to re-establish a presence in their traditional territory”.

The suit says the checkpoint is home to Williams and Bazil and “a place of regular cultural practice” for Wickham.

“The checkpoint at Gidimt’en in no way prevents travel along the [road]”, says the complaint.

“Lamprey Village is barely visible from the [road]. Does not impede traffic along the [road] no way.”

‘An effort to suppress legal activity’

The suit alleges that the police, Coastal GasLink, a security company and a subcontractor conspired by routinely sharing information, videos and photographs as part of a “joint effort” to force protesters away.

The court document cites incidents beginning last February, which include entering disputed areas multiple times a day, requiring photo identification, “illuminating high beams and floodlights on residential buildings at all hours of the night”, seizing equipment and property and carrying out unlawful arrests and detentions .

“They were irrational and excessive, discriminatory on the basis of race, malicious and abuse of police powers,” the suit reads.

“They represent an effort to suppress legal activity and the affirmation of indigenous rights and titles.”

Wickham is one of 10 protesters currently waiting to find out if the BC Prosecution Service plans to move forward with contempt charges stemming from alleged violations of the road service injunction last fall.

Earlier this month, the Crown decided it would charge another 15 protesters with contempt, but asked until July 7 to decide whether Wickham and nine others will also stand trial.

In an interview with the CBC, Wickham said the lawsuit filed this week poses a different – ​​but related – issue to the injunction battle.

“There they could claim they had legal authority to enter and make arrests based on compliance with the injunction,” she said.

The civil action notice says the officers asserted their right to be on “crown land” or “check to make sure no one was violating the conditions.”

In a statement, a police spokesperson said the RCMP has not yet received the complaint, but will provide “an official response through the civil court process” when it receives a copy.

Coastal GasLink has not yet responded to the lawsuit.

None of the allegations have been proven in court.