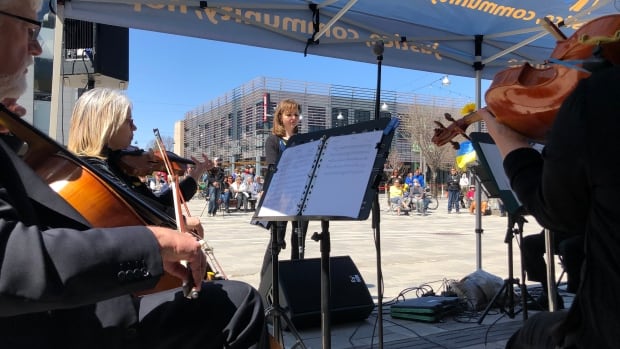 Violins sang for Ukraine over the weekend, as a series of benefit concerts in Ottawa aimed to raise $100,000 for humanitarian efforts in the country.

Two concerts, held on Saturday at Lansdowne Park and Sunday at the ByWard market, featured a mix of classical and traditional Ukrainian music.

Judit Marton, a violinist whose daughter lives in Poland, decided to organize the concert series after her anxiety at seeing the news prompted her to see a cardiologist.

“I said, instead of destroying myself, why don’t I take all that energy, all that nervousness and do something good with it,” she said.

So Marton reached out to a friend and asked if they would be willing to play some songs with her at the ByWard market to raise some money – and the ideas grew from there.

“He grew from an idea to all these people, all these musicians putting their heart and soul into making a difference,” said Marton.

The cash donations were collected directly from people in the crowd, Marton said, as well as through an online fundraiser.

Anna Fedorova, who arrived in Canada from Ukraine a week ago with her children, left on Sunday with her host Sophie Hargest to show her support for humanitarian efforts.

“We heard bombs in Kiev, and I decided that my children cannot hear and be [there]. So we decided to leave,” Federova said.

Mita Patel attended Saturday’s show in Lansdowne with some friends who are originally from Ukraine.

“[The music] It’s so beautiful and haunting,” said Patel, who lives in Toronto but was in town visiting her parents.

“It brings out all the emotions, it just makes you feel what the people of Ukraine are going through right now and that we are somehow connected.”

Andrii Bukvych, charge d’affaires at the Ukrainian Embassy in Ottawa, called the concerts an important sign of unity and support.

Over the weekend, Russian missiles hit the southern port city of Odesa and there was intense fighting in the eastern part of the country. including around Kharkiv, Ukraine’s second largest city.

In Mariupol, hundreds of civilians were rescued from a steel mill in a week-long operation mediated by the United Nations and the International Committee of the Red Cross.

Ukrainian forces at the factory vowed on Sunday to continue their stance.

Justin Trudeau made a surprise visit to Ukraine on Sunday to meet Ukrainian President Volodymyr Zelensky and reopened the Canadian Embassy, ​​welcoming the Canadian ambassador.

Trudeau briefly visited a blackened and bombed suburban community and visited the city of Irpin outside Kiev, which was the scene of some of the heaviest fighting in March as Russian forces attempted to storm the capital.