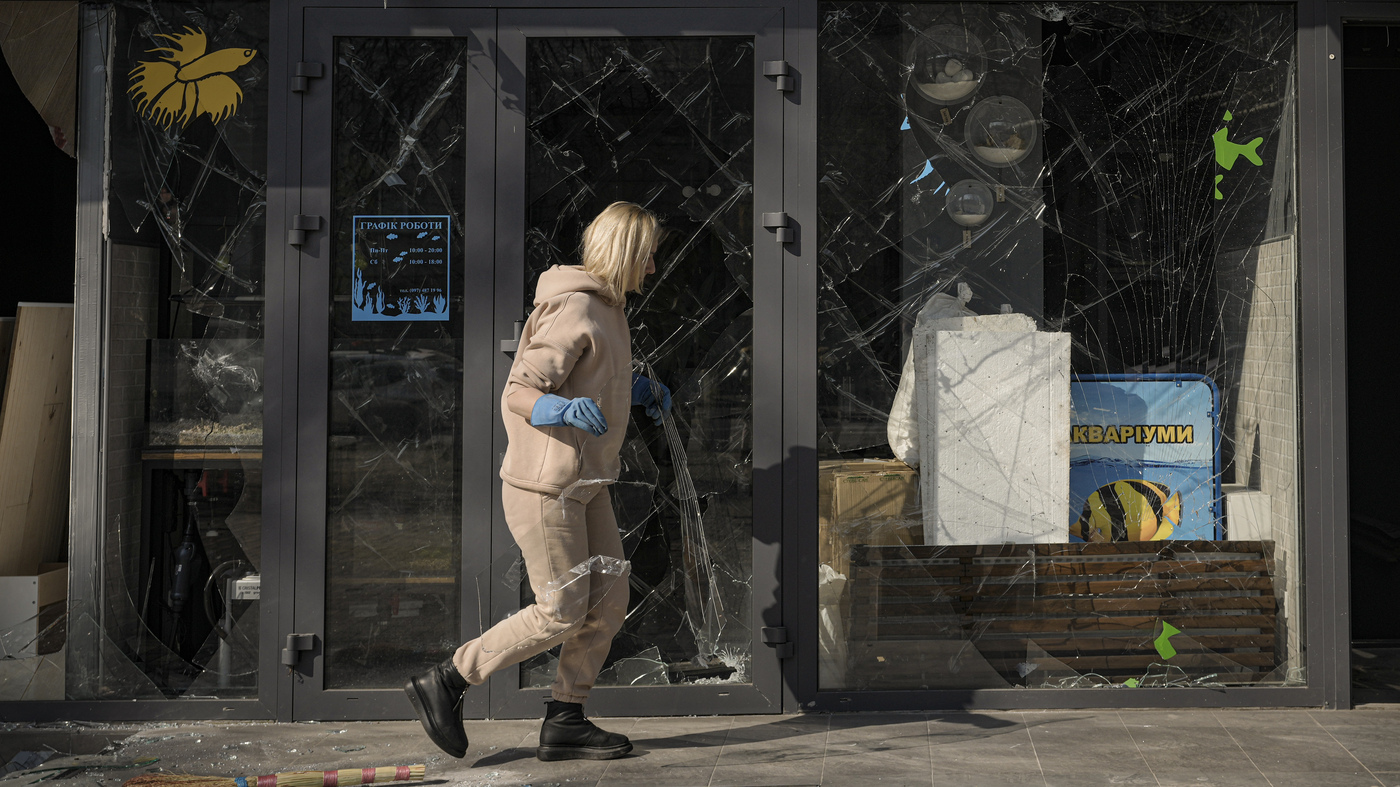 A woman removes pieces of broken glass from a shop window after a bombing in Kyiv, Ukraine, on March 23.

A woman removes pieces of broken glass from a shop window after a bombing in Kyiv, Ukraine, on March 23.

A new update from the World Bank measures the expected toll of Russia’s invasion of Ukraine on the economies of both countries, as well as on developing countries throughout the region.

Ukraine’s economy could shrink by 45.1% this year, while sanctions against Russia are expected to cut its economic output by 11.2%, economists say.

“The Russian invasion is delivering a massive blow to Ukraine’s economy and it has inflicted enormous damage to infrastructure,” Anna Bjerde, World Bank vice president for the Europe and Central Asia region, said in a press release. “Ukraine needs massive financial support immediately as it struggles to keep its economy going and the government running to support Ukrainian citizens who are suffering and coping with an extreme situation.”

More broadly, the regional economy of Europe and Central Asia is now expected to shrink by 4.1% this year — reversing a prewar forecast of 3% growth. The World Bank says that Belarus, Kyrgyzstan, Moldova and Tajikistan are projected to fall into recession this year, in addition to Russia and Ukraine.

Emerging and developing countries in this region had already been hit hard by the COVID-19 pandemic, the World Bank report notes, adding that “this would be the second contraction twice in as many years, and as large as the pandemic-induced contraction in 2020.”

The war only has heightened existing concerns about a global economic slowdown, surging debt and inflation, and a spike in the poverty level, according to the organization. The World Bank also warned last week of slower growth and rising poverty in the Asia-Pacific region, citing the war in Ukraine and other economic shocks.

Asli Demirgüç-Kunt, the World Bank’s chief economist for Europe and Central Asia, said in a press release that the pandemic and the war in Ukraine once again have proven that crises can “set back years of per capita income and development gains.”

She advises governments in the region to prepare for the fragmentation of trade in the region, to maintain focus on improving energy efficiency and to strengthen their social safety nets to protect the most vulnerable — including refugees.

“The deep humanitarian crisis sparked by the war has been the most pronounced of the global shockwaves and will likely initial be among the most enduring legacies of the conflict,” the World Bank says, adding that support to refugee communities and their host countries will be especially critical.

More than 4.5 million people have fled Ukraine as refugees since Russia first invaded in late February, according to a tracker from the United Nations.

This story originally appeared in the morning edition live blog.