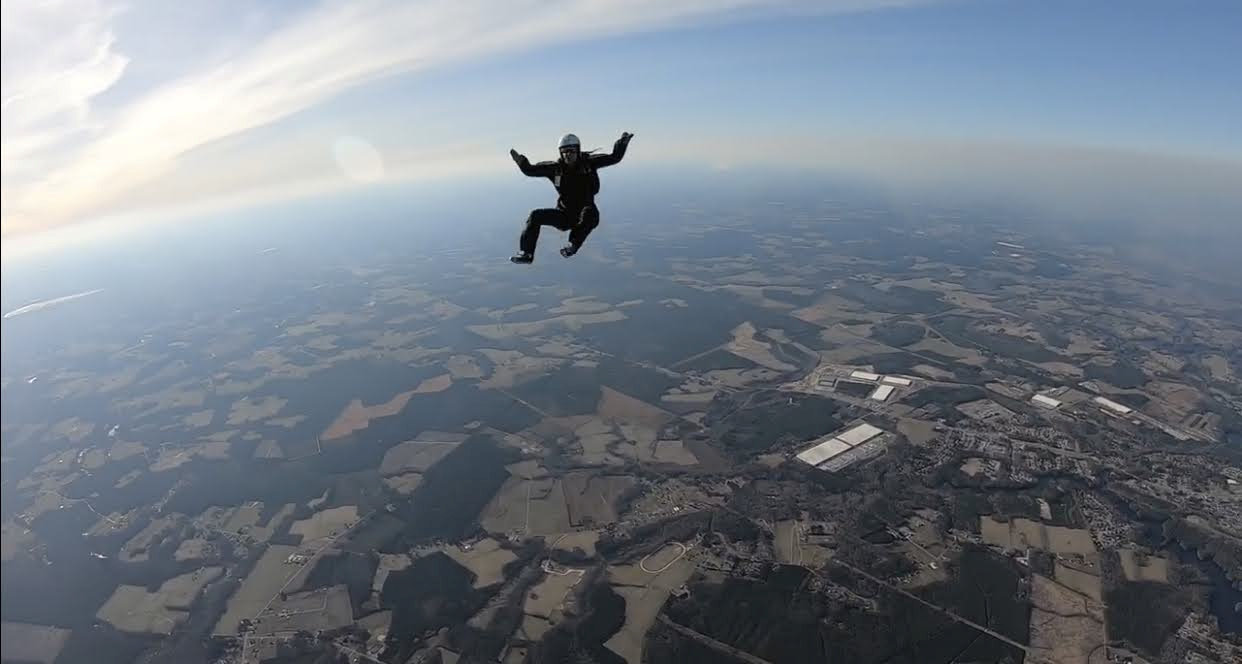 A Virginia skydiver miraculously survived after her parachute got tangled around her leg and she smashed into the ground at 125 mph.

Adrenaline junkie Jordan Hatmaker ended up in a highly dangerous downplane during her 13,500-foot fall – something that is only very rarely survivable.

Her first parachute was wrapped around her leg, and when her reserve was released, it catapulted both out in opposite directions, leaving her hurtling toward the earth in a terrifying spin.

Hatmaker hit the ground just 20 seconds after pulling her release cord and felt every bit of the impact as she remained conscious.

She suffered a broken back, leg and ankle. It took her three months to walk again, and now she plans to take to the skies again – after climbing to Everest Base Camp.

“I didn’t have any thoughts because I was spiraling so I didn’t know what was going on, I was just in strategy mode.”

After her 30-second fall, she hit the ground with her left leg and then bounced forward to land on her back.

Hatmaker spent 25 days recovering in a hospital and started walking three months after the accident.

It scuppered her plans of hiking to Everest Base Camp, which she had planned to start three days after the jump.

But she has rearranged the trip to November and she even hopes to skydive again one day.

Hatmaker said: “I don’t think that you should give up things that you love just because an obstacle was put in your way, life is too short and you should do what makes you happy.

“I really hope to send a message of trying to find the silver lining in whatever situation you’re in.

“You never know how strong you are until you have to be, don’t underestimate yourself.”

Hatmaker, from Virginia Beach, did her first-ever skydive in 2015 and completely fell in love.

She said: “I loved the challenge and conquering my fears and it really instilled confidence in me.

“I thought I could do anything.”

She did five tandem jumps between 2015 and 2020, and then decided to try and train for her skydiving license so she could jump without an instructor.

Halfway through her training, on November 14, 2021, she tried to get in two jumps so that she was well on her way to getting her license before Winter made practicing more difficult.

Her first jump over Suffolk, Virginia, went smoothly, but when she leaped out of the Skyvan plane for the second time that day for her 16th-ever jump, something went wrong.

After about 10 seconds of freefall, she moved away from her coach and pulled the cord to release her parachute, but the pilot kick – the initial smaller one that came out before the main canopy – was wrapped around her leg.

Her leg was suspended in the air as she fell at 125 mph with nothing to slow her down, and she scrambled to try and free herself, but as she did, her reserve kick was automatically released.

The jolt of the release catapulted the main canopy out of its bag, and the two inflated parachutes fly away from each other to create a “downplane.”

The parachutes hurtled her even quicker to the ground, and it is known in skydiving that landing a downplane will usually result in severe injuries or death.

She said: “I hit with my left leg first and then I bounced off of my butt and faceplanted, and that’s how I broke my back.

“There was just extreme burning through my lower back and down my legs.”

She did not fall unconscious and screamed for help, terrified she was paralyzed.

She said: “First I tried to push myself off the ground, and when I couldn’t move anything, my first thought was I was paralyzed and I was yelling that out.

“I’ve never heard sounds like those come out of my body. I screamed bloodcurdling screams.”

Fortunately, she didn’t land too far from the landing sight, and five minutes later, people hit over to help her.

An air ambulance was called to take her to Sentara Norfolk General Hospital where she was told she had broken most of her lower back, her tibia, and ankle, and suffered a spinal cord injury.

“When my back broke, some of the pieces of my vertebrae went into my spinal canal,” Hatmaker, who works in sales for a contractor, said.

“They gave me a lot of medicine!”

Hatmaker couldn’t lift her legs or feel her skin anywhere on the core of her body and thighs.

Jordan Hatmaker hit the ground just 20 seconds pulling her release cord and felt bit of the impact as she remained conscious. She suffered a broken back, leg and ankle.
Jordan Hatmaker/Zenger

Two days later she also had surgery to fix her broken tibia and ankle.

She said: “They said we don’t know what kind of mobility she’s going to have, but they didn’t think I was going to be paralyzed because I could wiggle my toes”

During her recovery, she would yell at her legs to move, but despite her frustrations, she always believed that she would one day walk again, even though her chances were slim.

She said: “I was very thankful to be alive, that was the thought I had most often.

“I had a lot of hope that I would walk again, even though I couldn’t lift my legs or move them back and forth.

“I had a lot of hope that I would do everything I wanted to do again.”

“It was just one big mountain to get me ready for the next.”

She did everything, including bathing and going to the toilet, from her bed for 15 days until she managed to sit up in her bed unassisted for the first time.

Hatmaker stayed in the hospital for a 25 days total recovering and physical therapy, before returning home to her two cockapo, Jax and Ella, and rabbit Card B.

She lifted her legs for the first time herself two weeks later.

She said: “That moment I could only lift it maybe half an inch off the bed but it was just so great to conquer a milestone.

“It was a sign of progress and I was really thrilled and excited, it just gave me more motivation to keep going.

“I started walking three months to the day of the accident.”

She still suffers from other aspects of the spinal cord injury, like numbness, nerve pain, and pelvic floor dysfunction, but has plans to finally conquer Everest Base Camp in November.

She said: “It doesn’t feel real, it feels like so surreal that that even happened but I’m thankful that the accident happened.

“I feel like there’s a like lot of growth that came out of it, and I really think there’s opportunity in tragedy.

“You can always find something positive even if you can’t see it now, there’s a light at the end of the tunnel and you’re going to be better for whatever you’re going through.”

Hatmaker even hopes to skydive again one day, after doing a few practices in the wind tunnel.

“Don’t tell my family!” she joked. “We’ll see what happens when I get to the plane door!”