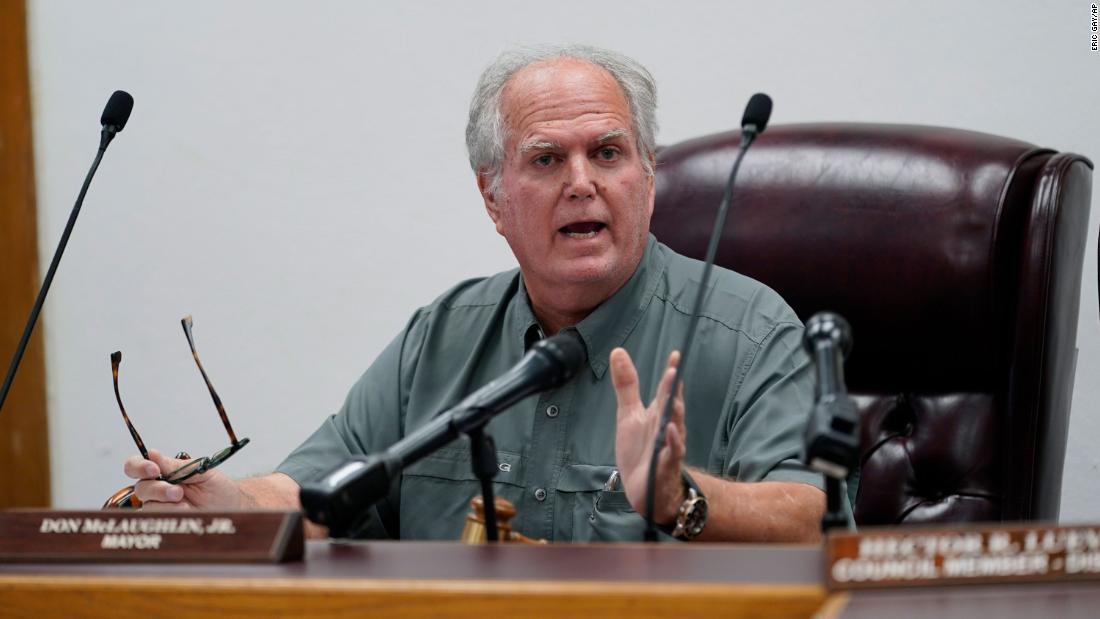 “Because of the lack of clarity that remains and the unknown timing of when I will receive the results of the investigations, I have made the decision to place Chief Arredondo on effective administrative leave on this date,” Harrell wrote in the media announcement. .

Lieutenant Mike Hernandez is taking over the duties of UCISD’s chief of police, Harrell said.

The superintendent wrote that he intended to wait for an investigation to complete before making personnel decisions.

“Today, I am still without details of the investigations being conducted by various agencies,” he wrote.

Arredondo testified Tuesday behind closed doors in Austin to a Texas House committee seeking answers to what happened on May 24, when 21 people were shot dead at an elementary school, but did not speak publicly about his shooting. decision on the day of the shooting.

The school district’s announcement comes a day after the Uvalde City Council, of which Arredondo is a new member, voted to deny his license application.

Harrell isn’t the only one who seems frustrated by the investigators’ lack of information.

Uvalde Mayor Don McLaughlin on Tuesday criticized the Texas Department of Public Safety (DPS) for its lack of transparency and accused its director, Colonel Steven McCraw, of intentionally downplaying his agency’s mistakes in the weeks that followed. to the massacre at Robb Elementary School.

“Colonel McCraw continued to, whether you want to call it a lie, leak, deception or misrepresentation, information to distance his own soldiers and Rangers from the answer. At each briefing he leaves out the number of his own officers and Rangers who were in the room. site that day,” McLaughlin told residents at a city council meeting on Tuesday.

“Colonel McCraw has an agenda and it’s not to present a full report on what happened and give factual answers about what happened to this community,” he added.

In addition, State Senator Roland Gutierrez, a Democrat representing Uvalde County, filed a lawsuit Wednesday against the DPS, arguing that the agency violated the Texas Public Information Act when his request for information about the shooting was ignored.

“In the wake of the senseless tragedy, the people of Uvalde and Texas have demanded answers from their government. So far, they have been met with lies, distortions and blame shifts,” the lawsuit states.

The criticism and the lawsuit come shortly after McCraw testified before a Texas Senate committee that the law enforcement response was an “abject failure” and violated commonly taught protocol to stop the shooter as quickly as possible.

The DPS director accused Arredondo, who McCraw and others identified as the commander at the scene, of ordering police to wait in a nearby hallway for unnecessary equipment and keys to a door that wasn’t even locked.

“Three minutes after the subject entered the west building, there were enough armed officers wearing bulletproof vests to isolate, distract and neutralize the subject,” McCraw said. “The only thing preventing the dedicated officer aisle from entering rooms 111 and 112 was the on-site commander, who decided to put the officers’ lives before the children’s lives.”

the pointed finger adds more tension to a tragedy that has become a case study in bad policing and worse communication. Almost a month has passed since an 18-year-old gunman killed 19 children and two teachers at the school. He remained inside the classrooms from 11:33 am to 12:50 pm – when the police finally broke through the door and killed him, according to a DPS timeline.

However, authorities repeatedly changed their accounts of key facts about what happened inside the rooms and what the police did in response during those 77 minutes.

McLaughlin said the Texas authorities’ repeated distortions and shifts of blame were dividing the community and frustrating grieving families.

“What matters to Uvalde is that these heartbroken families and this grieving community receive a full investigation and an accurate report of what happened that day,” he said. “The little infighting, clickbait headlines and politically motivated scapegoats aren’t helping anyone.”

CNN has reached out to the Texas Department of Public Safety, the district attorney’s office, the chairman of the Texas House investigative committee, and the FBI’s San Antonio office for further comment.

In his lawsuit filed on Wednesday, Gutierrez challenged the DPS’s decisions to withhold information from the public, including police body camera footage, 911 audio and ballistics reports.

“DPS violated Chapter 552 of the Government of Texas by failing to provide public documents that are presumed to be public within a reasonable time frame,” the lawsuit states.

In a section titled “The Cover-Up,” the lawsuit notes that the DPS used an exception to the law to keep the records private.

“These government agencies used the ‘ongoing law enforcement exception’ to Texas’ open records law to prevent access to information that might shed light on the response to the school shooting,” the lawsuit states.

Gutierrez is asking the Travis County District Court to order the DPS to immediately provide the documents in his application for records.

District Attorney Christina Mitchell Busbee issued a statement two weeks ago stating that the shooting was being investigated by the FBI and Texas Rangers and that “any disclosure of records of this incident at this time would interfere with said ongoing investigation and prevent a full and thorough investigation. .”

Still, Kelley Shannon, executive director of the Texas Freedom of Information Foundation, called for transparency in a statement Wednesday.

“It is important to note that the Texas Public Information Act does not require law enforcement investigators to withhold information from the public about a crime,” Shannon said. “Law enforcement’s exception to release is discretionary. In fact, many police officers and prosecutors across Texas routinely release investigative information to the public when they feel the need – whether to help catch a wanted suspect, seek further clues about a crime, or to show the positive performance of the police.”

At the city council meeting, McLaughlin noted that officers from at least eight law enforcement agencies were in the hallway outside classrooms on the day of the shooting. McLaughlin said he doesn’t want to run for elective office again and “is not covering anyone up,” saying all response agencies must be held accountable.

He said the leak of certain information in recent weeks “continues to create chaos in our community and prevents the full truth from being revealed”.

He particularly took aim at what he said was a false report that local police were not cooperating with investigators and expressed his frustration at being left in the dark.

“I’m just as frustrated — maybe not as frustrated as families who have lost loved ones — but it pisses me off not being able to give answers or not getting answers,” McLaughlin said.

McLaughlin said he was supposed to receive daily instructions from authorities from the start, but none were provided.

“The gloves are off. As we know, we will share it. We will not hold back anymore,” he said.

McLaughlin has criticized investigators for a lack of transparency before, saying at a city council meeting on June 7: “We had some mistakes with the DPS releasing a few different facts or things, but it wasn’t the Rangers who were leading the investigation. blaming nobody,” he said.
“We were told one thing one day, and the next day the narrative changed. You were told for a week that a teacher opened the door with a rock, and by the end of the week that story is gone too. These are the mistakes I’m talking about “, he added.