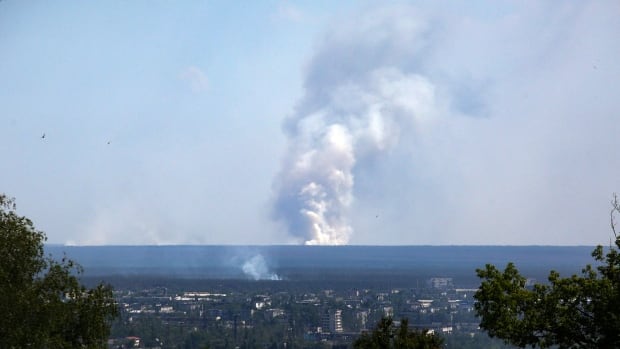 After weeks of fierce fighting, Ukrainian forces will withdraw from a besieged city in the east of the country to avoid siege, a regional governor said on Friday.

The city of Severodonetsk, the administrative center of the Luhansk region, faced relentless Russian bombardment. Ukrainian troops fought the Russians in house-to-house battles before retreating to a huge chemical factory on the outskirts of the city, where they hid in its sprawling underground structures.

In recent days, Russian forces have made gains around Severodonetsk and the nearby town of Lysychansk, on a steep bank across the river, in an attempt to encircle Ukrainian forces.

Some Ukrainian forces remained in hiding with around 500 civilians at the Azot chemical plant, the only part of the city still under Ukrainian control.

“We’ll have to pull our guys out,” he said. “It makes no sense to stay in the destroyed positions, because the number of casualties in poorly fortified areas will grow every day.”

Haidai said Ukrainian forces had “received the order to retreat to new positions and continue fighting there”, but did not elaborate.

He said the Russians were also advancing towards Lysychansk from Zolote and Toshkivka, adding that Russian reconnaissance units had carried out incursions into the city limits but were driven back by its defenders.

The governor added that a bridge on a highway leading to Lysychansk was badly damaged in a Russian air strike and had become unusable for trucks. The claim could not be independently verified.

Russia commands most of 2 provinces

The Russian Defense Ministry said on Friday that four Ukrainian battalions and a unit of “foreign mercenaries” totaling around 2,000 troops had been “completely blocked off” near Hirske and Zolote, south of Lysychansk.

After a failed attempt to capture Ukraine’s capital Kyiv in the early stages of the invasion that began on February 24, Russian forces have shifted focus to the Donbas region, where Ukrainian forces have been fighting Moscow-backed separatists since 2014.

Ukraine’s Ambassador to Canada Yulia Kovaliv said Ukraine’s order for Canadian light armored vehicles was “under consideration”, but stressed that time was of the essence. “Each day of delay unfortunately costs the lives of our soldiers”

The Russian military controls about 95% of Luhansk Province and about half of neighboring Donetsk Province, the two areas that make up the Donbas.

After repeated calls to its Western allies for heavier weapons to counter Russia’s advantage in firepower, Ukrainian Defense Minister Oleksii Reznikov said an answer had arrived in the form of American medium-range rocket launchers.

In another development, a pro-Moscow government official in the southern city of Kherson, who was captured by Russian troops at the start of the invasion, was killed in an explosion on Friday.

The pro-Russian regional administration in Kherson said Dmitry Savlyuchenko died when his vehicle exploded in what it described as a “terrorist attack”.

There was no immediate claim of liability.

More US military aid on the way

Meeting at a summit in Brussels, the leaders of the European Union’s 27 countries on Thursday obtained the unanimous approval needed to grant Ukraine candidate status. This triggers an adhesion process that can take years or even decades.

European officials said Ukraine had already adopted around 70% of EU rules and standards, but also pointed to the need for other far-reaching measures.

WATCH l Ukraine MP says his country is ‘ready to fight and die for European values’:

In a political victory for Ukraine and a potential blow to Vladimir Putin, the European Union has granted Ukraine candidate status, putting it on a path to joining the EU in the coming years.

“It’s a victory. We’ve been waiting for 120 days and 30 years,” he said on Instagram, referring to the length of the war and the decades since Ukraine gained independence following the dissolution of the Soviet Union. “And now we are going to defeat the enemy.”

Ukraine applied for membership less than a week after the February 24 invasion of Moscow.

In 2013, Russian President Vladimir Putin opposed Ukraine’s plans to sign an association agreement with the EU and pressured the Ukrainian president at the time to back out at the last minute.

As the European bloc met, US officials announced on Thursday that they would send another $450 million in military aid to Ukraine, including four more medium-range rocket systems, munitions and other supplies.

Germany hosted a summit on global food security on Friday. United Nations Secretary-General Antonio Guterres told those gathered in Berlin that the war in Ukraine has increased disruptions caused by climate change, the coronavirus pandemic and inequality to produce an “unprecedented global famine” that is already affecting hundreds of millions of people.

“There is a real risk that multiple famines will be declared in 2022,” he said in a video message to officials from dozens of rich and developing countries gathered in Berlin. “And 2023 could be even worse.”

Guterres noted that crops in Asia, Africa and the Americas will be affected as farmers around the world struggle to cope with rising fertilizer and energy prices.

“This year’s food access issues could become global food shortages next year,” he said. “No country will be immune from the social and economic repercussions of such a catastrophe.”

Prime Minister Justin Trudeau has blamed Russia for the global food crisis and urged other Commonwealth leaders to step away from Moscow. But his appeals were met with resistance, as several countries met with Russia, China and Brazil.

Guterres said UN negotiators were working on a deal that would allow Ukraine to export food, including through the Black Sea, and allow Russia to bring food and fertilizer to world markets without restrictions.

The host of the meeting in Berlin, German Foreign Minister Annalena Baerbock, said Moscow’s claim that Western sanctions imposed over Russia’s invasion of Ukraine are to blame for food shortages was “completely untenable”.

Russia exported as much wheat in May and June this year as it did in the same months in 2021, Baerbock said.

Russia finds a home for its wheat in a number of countries, including many in Africa and the Middle East.