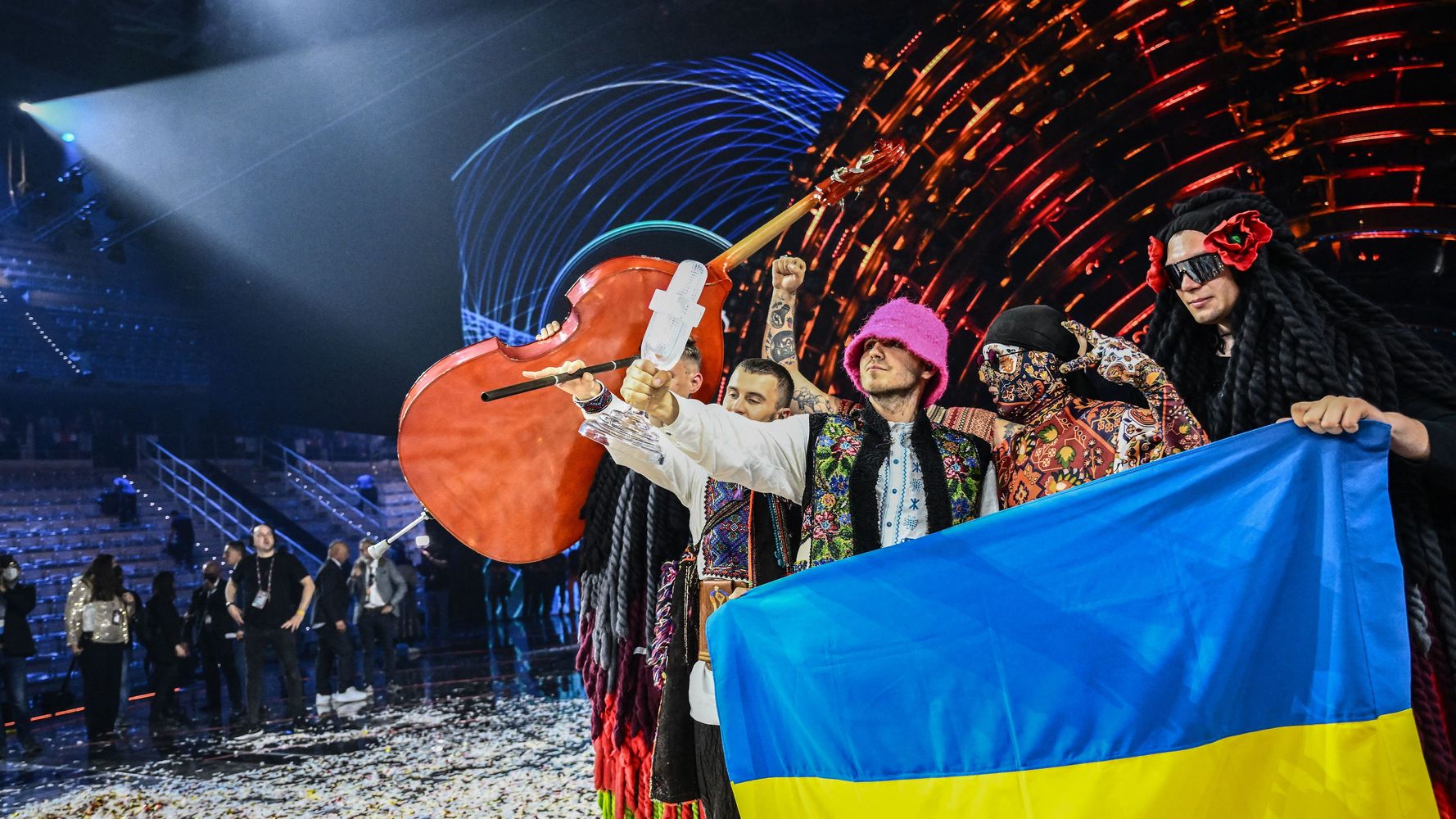 Turin, Italy (AP) – Ukrainian band Kalush Orchestra won the Eurovision Song Contest in the early hours of Sunday, in a clear show of popular support for the war-torn nation that has gone beyond music.

Ukrainian President Volodymyr Zelenskyy hailed the victory, Ukraine’s third since its Eurovision debut in 2003, and said “we will do our best” to host next year’s competition in the port city of Mariupol. He underlined “Ukrainian Mariupol”, adding: “free, peaceful, rebuilt!”

“Thank you for the win, Kalush Orchestra and everyone who voted for us!” Zelenskyy said in a post on the messaging app Telegram. “I am sure that our victorious chord in the battle with the enemy is not far off.”

⚡️Zelensky: ‘We will do everything we can to one day host Eurovision in a Ukrainian Mariupol.’

The President thanked the Kalush Orchestra for their performance at Eurovision 2022 and everyone who voted for Ukraine.

“I am sure that our victorious chord in the battle with the enemy is not far off.”

Kalush Orchestra leader Oleg Psiuk tapped into last year’s massive global audience of over 180 million to make an impassioned appeal to fighters still trapped under a massive steel mill in Mariupol after his performance.

Kalush Orchestra’s song “Stefania” was a sentimental and bookmaker favorite among the 25 artists competing in the grand finale. Audience voting at home, via text message or the Eurovision app, was decisive, elevating them above British Tik Tok star Sam Ryder, who led after national juries in 40 countries voted.

“Stefania” was written by Psiuk as a tribute to her mother, but since the invasion of Russia on February 24, it has become an anthem for the motherland, with lyrics that promise: “I will always find my way home, even if all the roads are destroyed.”

The Kalush Orchestra itself is a cultural project that includes folklore experts and blends traditional folk tunes and contemporary hip hop in a purposeful defense of Ukrainian culture. This has become an even more salient point as Russia, through its invasion, has sought to falsely claim that Ukraine does not have its own unique culture.

The call to free the remaining Ukrainian fighters trapped under the Azovstal factory by the Russians served as a grim reminder that the hugely popular and sometimes extravagant Eurovision song contest was being played against the backdrop of a war on the eastern flank of Europe.

The Azov battalion, which is among the last 1,000 defenders of the plant, sent their thanks from the maze of tunnels under the plant, posting on Telegram: “Thanks to the Kalush Orchestra for their support! Glory to Ukraine!”

The city itself has been the sites of some of the worst destruction in the 2.5-month war, as Russia seeks to secure a land bridge between Donbas and separatist-controlled Crimea, which it annexed in 2014.

The six-member, all-male band received special permission to leave the country to represent Ukraine and Ukrainian culture in the song contest. One of the original members stayed to fight, and the others plan to return once the competition is over.

Psiuk told the Associated Press ahead of the contest that he will return to a volunteer organization he set up early in the war that uses social media to help find transportation and shelter for people in need.

Although support for Ukraine in the song contest was overwhelming, the contest remained open until the final popular votes were tallied. And war or not, fans from Spain, Britain and elsewhere entering the PalaOlimpico from all over Europe were rooting for their own country to win.

Still, Ukrainian music fan Iryna Lasiy said she felt global support for her country in the war and “not just for the music”.

Russia was excluded this year after the February 24 invasion of Ukraine, a move organizers said was aimed at keeping politics out of contention that promotes diversity and friendship between nations.

Back in Ukraine, in the northeastern city of Kharkiv, the Kalush Orchestra’s participation in the contest is seen as giving the nation another platform to garner international support.

“The whole country is growing, everyone in the world supports us. This is extremely cool,” said Julia Vashenko, a 29-year-old teacher.

“I believe that wherever there is Ukraine now and there is an opportunity to talk about the war, we need to talk,” said Alexandra Konovalova, a 23-year-old makeup artist from Kharkiv. “All competitions are important now, because from them more people learn about what is happening now.”

Ukrainians in Italy were also using the Eurovision event as the backdrop for a flashmob this week to ask Mariupol for help. About 30 Ukrainians gathered at a bar in Milan to watch the broadcast, many wearing a shiny hat like Psiuk’s in support of the band.

“We are very happy that he called to help save people in Mariupol,” lawyer Zoia Stankovska said during the show. “And we are sure they will win.”

The winner takes home a glass mic trophy and a potential career boost – although the Kalush Orchestra’s first concern is peace.

The event was organized by Italy after local rock band Maneskin won last year in Rotterdam. The victory propelled the Roma band to international fame, opening for the Rolling Stones and appearing on Saturday Night Live and on numerous magazine covers in their typically genderless dress code.

Twenty bands were chosen in two semi-finals this week and competed alongside the Big Five from Italy, Great Britain, France, Germany and Spain, who have permanent spots due to financial support for the contest.

Ukrainian commentator Timur Miroshnichenko, who does the live narration for Ukraine’s Eurovision broadcast, was participating in a basement at an undisclosed location rather than his usual TV studio.

“On the fifth or fourth day of the war, they shot at our TV tower in Kiev,” he said. To continue broadcasting, “we had to move somewhere underground in Ukraine.”

Showing Eurovision in Ukraine was important, online and on TV, he said.

“This year, I think it’s more symbolic than ever,” Miroshnichenko said.

Ukraine was able to participate in the music contest “thanks to the Armed Forces of Ukraine and the resistance of our people,” he said.