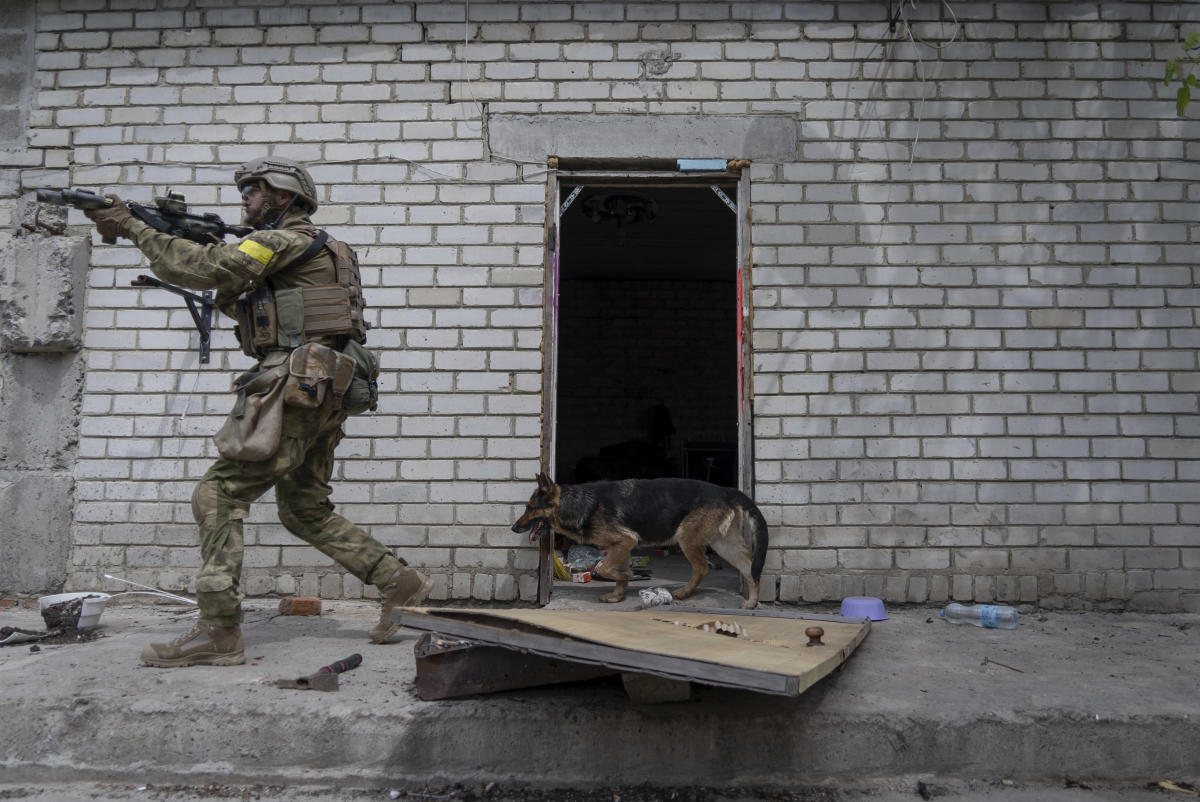 KYIV, Ukraine (AP) – Fresh from his country’s Eurovision victory, defiant Ukrainian President Volodymyr Zelenskyy earlier on Sunday promised to host the music contest in the city of Mariupol, which is almost entirely in Russian hands, one day. in addition to a strong group of a few hundred Ukrainian fighters who continue to resist in a steel factory.

The Kalush Orchestra of Ukraine won the popular contest with their song “Stefania,” which became a popular anthem among Ukrainians during the war, and their victory was a morale booster.

“Our courage impresses the world, our music conquers Europe,” Zelenskyy said on Facebook. “Next year Ukraine will host Eurovision!”

The band made an impassioned plea during the show to help the fighters still at the Azovstal steelworks in the port city, and Zelenskyy said that “one day” the contest would be held “in a Ukrainian Mariupol”.

The president’s optimistic words come as Russian troops are withdrawing from Kharkiv, the country’s second-largest city, after bombing it for weeks, and Moscow’s forces remain engaged in an uphill battle for the country’s eastern industrial heartland.

Ukraine’s military said Russian forces are now moving away from the northeastern city to focus on guarding supply routes, while launching mortar, artillery and air strikes in eastern Donetsk in an attempt to “deplete Ukrainian forces and destroy fortifications”.

Russian forces control a horseshoe-shaped swath of territory in the Ukrainian areas of Donetsk and Luhansk, which make up the eastern Donbas region, along the border of the industrial region where Ukraine has been fighting Moscow-backed separatists since 2014.

Zelenskyy said Ukrainian forces had also made progress in the east, retaking six towns or villages in the last day. In his Saturday night speech, he said that “the situation in Donbas remains very difficult” and that Russian troops “are still trying to come out at least somewhat victorious”.

“Step by step,” Zelenskyy said, “we are forcing the occupiers to leave the Ukrainian land.”

Ukraine “appears to have won the Battle of Kharkiv,” said the Institute for the Study of War, a Washington-based think tank. “Ukrainian forces prevented Russian troops from encircling, let alone capturing Kharkiv, and then drove them out of the city, as they did with Russian forces trying to capture Kiev.”

Fighting was fierce on the Siversky Donets River near the city of Severodonetsk, where Ukraine launched counterattacks but failed to stop Russia’s advance, said Oleh Zhdanov, an independent Ukrainian military analyst.

However, Russian forces suffered heavy losses in a Ukrainian attack that destroyed a floating bridge they were using to try to cross the same river in the town of Bilohorivka, Ukrainian and British officials said.

The ministry said the risky river crossing is a sign of “the pressure Russian commanders are under to make progress in their operations in eastern Ukraine”.

In a phone call on Saturday, Putin told Finnish President Sauli Niinisto that there are no threats to Finland’s security and that joining NATO would be a “mistake” and would “negatively affect Russian-Finnish relations.”

Potential offers from Nordic nations were called into question on Friday when Turkish President Recep Tayyip Erdogan said his country “does not have a favorable opinion”.

Yesica Fisch in Bakhmut, Yuras Karmanau in Lviv, Mstyslav Chernov in Kharkiv, Elena Becatoros in Odesa, Jill Lawless in London and other AP staff around the world contributed to this report.

Follow AP’s coverage of the war in Ukraine: https://apnews.com/hub/russia-ukraine