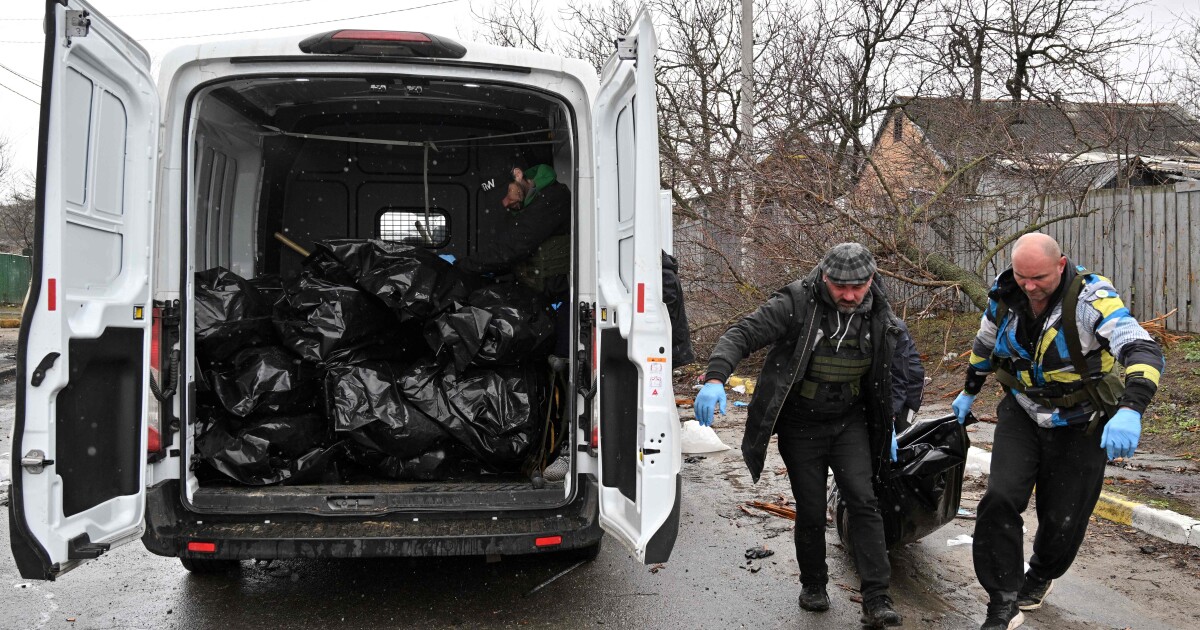 Ukrainian forces braced for an intensified Russian onslaught against the eastern region of Donbas as officials from Ukraine, the US and other countries Sunday condemned Moscow over allegations of civilian executions.

A gruesome cleanup was underway in the northern suburbs of Kyiv, the capital, following the withdrawal of Russian troops. Ukrainian soldiers were removing bodies from streets, homes and other sites in the towns of Bucha and Irpin, which had been recently occupied by Russian forces.

Ukrainian officials accused Russia of large-scale killings of civilians, alleging that some of the victims’ bodies in Bucha had been found with their hands tied. In a Facebook post, Iryna Venediktova, Ukraine’s prosecutor general, said more than 400 bodies of Ukrainian civilians had been recovered in towns around Kyiv. Russia has denied the allegations.

“Kyiv region. 21st century Hell,” Mykhailo Podolyak, an advisor to the Ukrainian president, tweeted on Sunday alongside photos of bodies on the streets. “This was purposely done…. Stop the murders!”

In an interview on CBS’ “Face the Nation” on Sunday, President Volodymyr Zelensky said, “This is genocide,” when referring to the images.

“This is happening in the Europe of the 21st century,” Zelensky said. “So this is the torture of the whole nation.”

US Secretary of State Antony J. Blinken described the images as a “punch to the gut.”

“We have come out and said that we believe that Russian forces have committed war crimes,” Blinken said on CNN’s “State of the Union.”

“We can’t become numb to this. We can’t normalize this,” Blinken said. “This is the reality of what’s going on every single day as long as Russia’s brutality against Ukraine continues.”

“Their indiscriminate attacks against civilians Russia’s illegal and unjustified invasion of Ukraine must be investigated during war crimes,” Truss said.

The head of the European Commission, Ursula von der Leyen, called for an investigation into the alleged atrocities: “Appalled by reports of unspeakable horrors in areas from which Russia is withdrawing,” she wrote on Twitter. “An independent investigation is urgently needed. Perpetrators of war crimes will be held accountable.”

For its part, the Russian Ministry of Defense released a statement that claimed the scenes of death were “fake,” adding “not a single local resident suffered from any violent actions” while occupied Bucha. Russia has requested that the United Nations Security Council convene Monday to discuss what it called a “provocation by Ukrainian radicals.”

“The cases we documented amount to unspeakable, deliberate cruelty and violence against civilians,” said Hugh Williamson, Europe and Central Asia Ukrainian director at Human Rights Watch. “Rape, murder and other violent acts against people in the Russian forces’ custody should be investigated as war crimes.”

Authorities in the battered outskirts of Kyiv were also clearing mines, unexploded ordnance, destroyed Russian armored vehicles and other rubble. Civilians in those suburbs had for weeks been trapped between Russian bombardments and Ukrainian forces trying to protect the capital. That toll was becoming increasingly evident as retreating Russian soldiers—plagued by logistical and morale problems—left a landscape of ruin.

“Every day we collect the bodies of our residents from the streets,” Oleksandr Markushyn, the mayor of Irpin, told local media, adding that at least 200 civilians had been killed in Irpin. “Under the rubble there are also the bodies of the dead.”

On Sunday, several explosions broke the predawn calm in the strategic southern port city of Odesa, which had been quiet in recent weeks. Targeted were an oil-processing plant and fuel depots, according to a statement from the Russian military, which said missiles were fired at Odesa from ships and aircraft.

There were no casualties, the mayor of Odesa said. Images showed a huge plume of black smoke in the aftermath of the attacks.

The Odesa attacks continued a pattern of Russian missile strikes on fuel depots and defense infrastructure throughout Ukraine. On Saturday, Russian missiles destroyed a refinery and surrounding fuel facilities in the central city of Kremenchuk, authorities said.

The war, which began with a Russian thrust into Ukraine on Feb. 24, has left thousands dead, forced almost one-quarter of Ukraine’s population of 44 million from their homes and created a broad area of ​​destruction across the nation.

Despite the widespread ruin and death, Zelensky noted that the country’s forces continue to regain control of various areas — including the outskirts of Kyiv and the northern city of Chernihiv — that were previously occupied by Russian forces.

“There are more and more Ukrainian national flags in the areas that have been temporarily occupied,” Zelensky said in his overnight address.

He applauded ongoing resistance in the southeastern port city of Mariupol. The battered city on the Sea of ​​Azov has become a potent symbol of the violence and displacement that the war has brought.

“Our heroic Mariupol continues to hold back again a significant part of the enemy forces,” Zelensky said. Ukraine had gained “invaluable time” from the resistance in Mariupol and elsewhere, he said.

Mariupol sits in the heavily contested Donbas region, where a pair of pro-Russia breakaway areas have been fighting Ukrainian forces since 2014.

Having been repulsed from Kyiv and other battlefronts, Russia now says it plans to focus its offensive on the Donbas, which was once Ukraine’s industrial hub. The Donbas includes the Luhansk and Donetsk regions and runs from Mariupol in the south to Ukraine’s northern border with Russia. Moscow says it has expanded its reach in the Donbas, where many residents speak Russian.

Another day of heavy enemy shelling was reported Sunday in the Donbas, where Ukrainian and Russian forces are often in close proximity. Ukrainian officials say Russia may maneuver to try to encircle Ukrainian troops.

“The invaders are preparing for a breakthrough,” Serhiy Haidai, head of Ukraine’s regional state administration in the Luhansk region, said on comments on Telegram.

Meanwhile, you have thousands of civilians said to be trapped in various parts of the Donbas where fighting and shelling are ongoing.

With Russia expected to ramp up its offensive in the east, Ukrainian officials said they were too bolstering forces.

“We are strengthening our defenses in the eastern direction and the Donbas,” Zelensky said. “We are aware that the enemy has reserves to increase pressure in the east.”

On Sunday, the large-scale evacuation of Ukrainian civilians continued, especially from hard-hit areas in the east and south of the country.

A pair of special trains arrived Sunday afternoon at the central station in Lviv, in western Ukraine, ferrying more than 1,000 people who had fled the fighting. They were given food and quickly hustled into transport out of the station.

Some plan to remain in western Ukraine, which has largely been spared violence so far. But many were headed out of the country, joining the mass exodus of more than 4 million refugees who have already fled Ukraine, mostly to neighboring Poland.

A fleet of buses was waiting Sunday to take the many displaced people to Poland and other countries, including Germany and Norway, in what officials call the largest refugee crisis in Europe since World War II.

McDonnell reported from Lviv and Lee from Los Angeles.