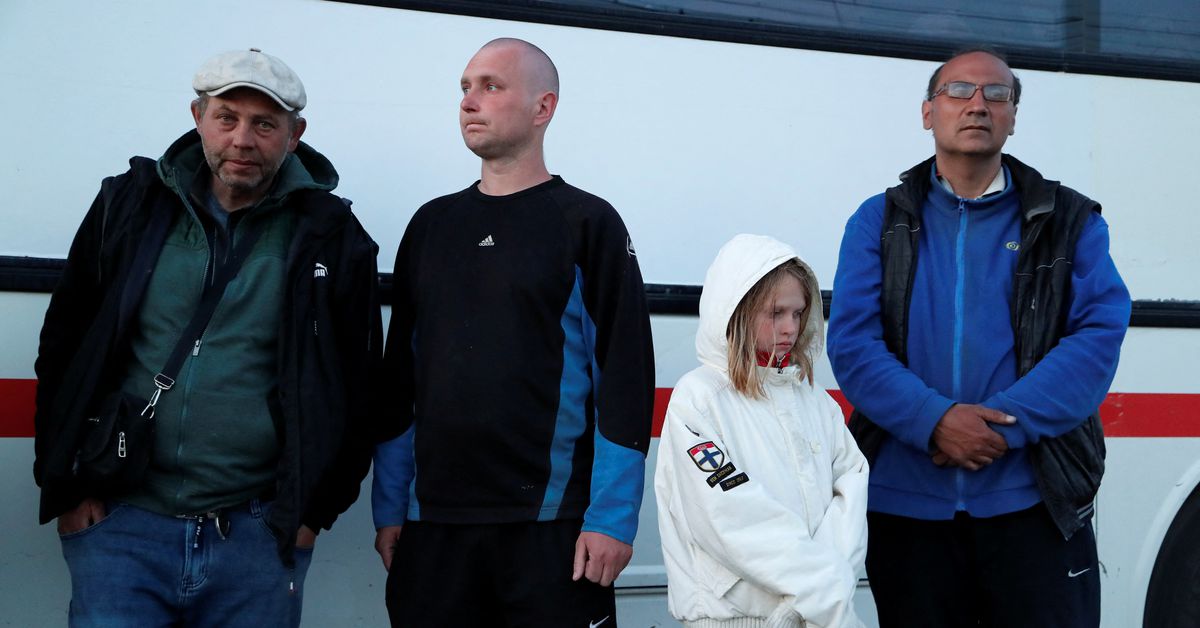 KYIV, May 7 (Reuters) – All women, children and elderly civilians have been evacuated from the Azovstal steelworks in Mariupol, Ukrainian officials said on Saturday, after a week-long effort rescued hundreds of people during a Russian attack on the plant. .

“This part of the Mariupol humanitarian operation is over,” Deputy Prime Minister Iryna Vereshchuk wrote on the messaging app Telegram.

The Soviet-era steel mill, the last stronghold in Mariupol for Ukrainian forces, has become a symbol of resistance to the Russian effort to capture swathes of eastern and southern Ukraine in the 10-week war.

Under heavy bombardment, fighters and civilians were trapped for weeks in bunkers and deep tunnels that crisscross the site, with little food, water or medicine.

Russian forces backed by tanks and artillery tried again on Saturday to attack Azovstal, seeking to dislodge the last Ukrainian defenders in the strategic port city on the Sea of ​​Azov, Ukraine’s military command said.

Weeks of Russian bombing left Mariupol in ruins. The steel mill was largely destroyed. During lulls in the fighting, evacuations of civilians began last weekend, mediated by the United Nations and the International Committee of the Red Cross.

Ukrainian President Volodymyr Zelenskiy said in an evening speech that more than 300 civilians had been rescued from the plant. Authorities will now focus on evacuating the wounded and doctors and helping residents elsewhere in Mariupol and nearby settlements to safety, he said.

Russian-backed separatists also reported a total of 176 civilians evacuated from the plant. It was unclear whether civilian men were still there.

Ukrainian fighters at the plant vowed not to surrender. It was unclear how many remained, and Ukrainian officials fear Russian forces will want to eliminate them until Monday, when Moscow celebrates the Soviet Union’s victory over Nazi Germany in World War II. see More information

In Washington, the director of the US Central Intelligence Agency, William Burns, said Russian President Vladimir Putin is convinced that “doubling down” the conflict will improve the outcome for Russia.

“He’s in a frame of mind where he doesn’t believe he can afford to lose,” Burns said at a Financial Times event.

Moscow has called its actions since February 24 a “special military operation” to disarm Ukraine and rid it of anti-Russian nationalism fostered by the West. Ukraine and the West say Russia launched an unprovoked war.

In Kiev on Saturday, the World Health Organization said it had documented 200 attacks on health facilities in Ukraine, the latest allegations of war crimes by Russian forces. Russia has denied attacking civilian targets. see More information

Mariupol, which lies between the Crimean peninsula seized by Moscow in 2014 and parts of eastern Ukraine seized by Russian-backed separatists that year, is instrumental in linking the two Russian-held territories and blocking Ukrainian exports.

A member of the pro-Russian troop service stands in front of people who were evacuated from Mariupol during the Ukraine-Russia conflict, outside a bus near a temporary accommodation center in the village of Bezimenne, in the Donetsk region, Ukraine 2022. REUTERS/Alexander Ermochenko

The Ukrainian General Staff said Russia’s offensive in eastern Ukraine is aimed at establishing full control over the Donetsk and Luhansk regions and maintaining the land corridor between these territories and Crimea.

Ukrainian armed forces fighting in the two eastern regions controlled by Russian-speaking separatists said in a Facebook post that they fought nine enemy attacks on Saturday, destroying 19 tanks and 24 other armored vehicles, as well as shooting down a helicopter.

Luhansk regional governor Serhiy Gaidai said Russia dropped a bomb on a school in the village of Bilohorivka, where about 90 people were sheltering. About 30 have been rescued so far, he said on Facebook.

The Russian Defense Ministry did not immediately respond to a request for comment on the alleged bombing.

Zelenskiy in his speech expressed outrage over Russian bombing overnight that destroyed a museum dedicated to 18th-century philosopher and poet Hryhoriy Skovoroda in the village of Skovorodynivka, near Kharkiv. see More information

The Russian Defense Ministry said it had destroyed a large stockpile of US and European military equipment near the Bohodukhiv railway station in the Kharkiv region.

Reuters was unable to independently verify statements by either side about battlefield events.

The speaker of the lower house of the Russian parliament, Vyacheslav Volodin, accused Washington of coordinating military operations in Ukraine, which he said amounted to direct US involvement in military actions against Russia. see More information

US officials said the United States provided Ukraine with intelligence to help fight the Russian attack, but denied that such intelligence included accurate targeting data.

Washington and European members of NATO’s transatlantic alliance have provided Kiev with heavy weapons but say they will not participate in the fighting.