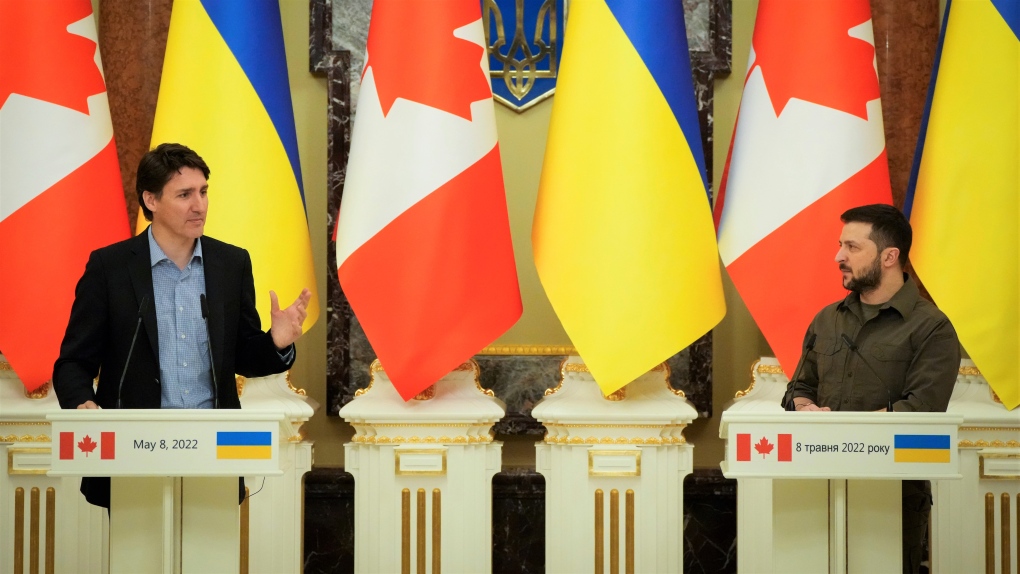 Prime Minister Justin Trudeau made a surprise trip to Ukraine on Sunday amid the ongoing Russian invasion.

He was accompanied by Deputy Prime Minister Chrystia Freeland and Foreign Minister Melanie Joly. They arrived in Kiev this morning.

The Prime Minister’s Office says he is scheduled to meet Ukrainian President Volodymyr Zelenskyy to show Canada’s support for the country and its people.

Oleksandr Markushyn, the mayor of Irpin, posted photos on his social media account showing the prime minister visiting the devastation in the Kiev suburbs. The city was heavily bombed before Russian forces retreated.

Trudeau also raised the Canadian flag to mark the reopening of the Canadian Embassy in Kiev alongside Freeland and Joly. The embassy had been closed since early February as Western intelligence services warned that a Russian invasion appeared imminent. Diplomatic officials were initially transferred to the western city of Lviv, but have since all moved to Poland.

“This flag went down on February 13 and we are very happy to raise it again,” the prime minister told reporters at the embassy. “Having the Canadian flag flying over Kiev once again is incredible proof of the strength and solidarity of Canadians in Ukraine.”

A first attempt to fly the flag was marred by a cable failure, before a second successful attempt at a ceremony shared by Canadian officials and Sergii Maier, one of the Ukrainian security guards tending the empty building.

Maier was personally thanked by the prime minister who described the raising of the flag as an important symbolic moment of friendship between Canada and Ukraine.

“It’s not just another sign of solidarity,” he told CTV’s Question Period on Sunday.

“(Trudeau) has a very decent understanding of what’s going on here. But now he’s had a chance to see it for himself,” Shevchenko said. “I think it’s very important that he has that understanding.”

The timing of Trudeau’s visit also falls the day before Russia’s Victory Day, which celebrates the Soviet Union’s World War II victory over Nazi Germany. Some observers believe Russian President Vladimir Putin could use the May 9 commemorations to declare a symbolic victory over Ukraine or herald further escalation in the conflict.

“I think those who are here in Kiev – they really appreciated the timing of this visit,” said the former ambassador. “Yes, it is true that Russians are obsessed with this May 9 mythology and there is a lot of news and talk about what might happen in the next 24 hours.”

Trudeau also plans to hold virtual meetings with G7 leaders to talk about the war in Ukraine.

US First Lady Jill Biden also made an unannounced Mother’s Day visit to the country, meeting with local mothers and her Ukrainian counterpart in the southwestern city of Uzhhorod.


With archives from The Canadian Press

I’m in Ukraine with @cafreeland and @melanejoly today. We are here to show our support for Ukraine and its people. Our message to the president @ZelenskyyUa and Ukrainians is this: Canada will always stand side by side with Ukraine. More to come on our visit.