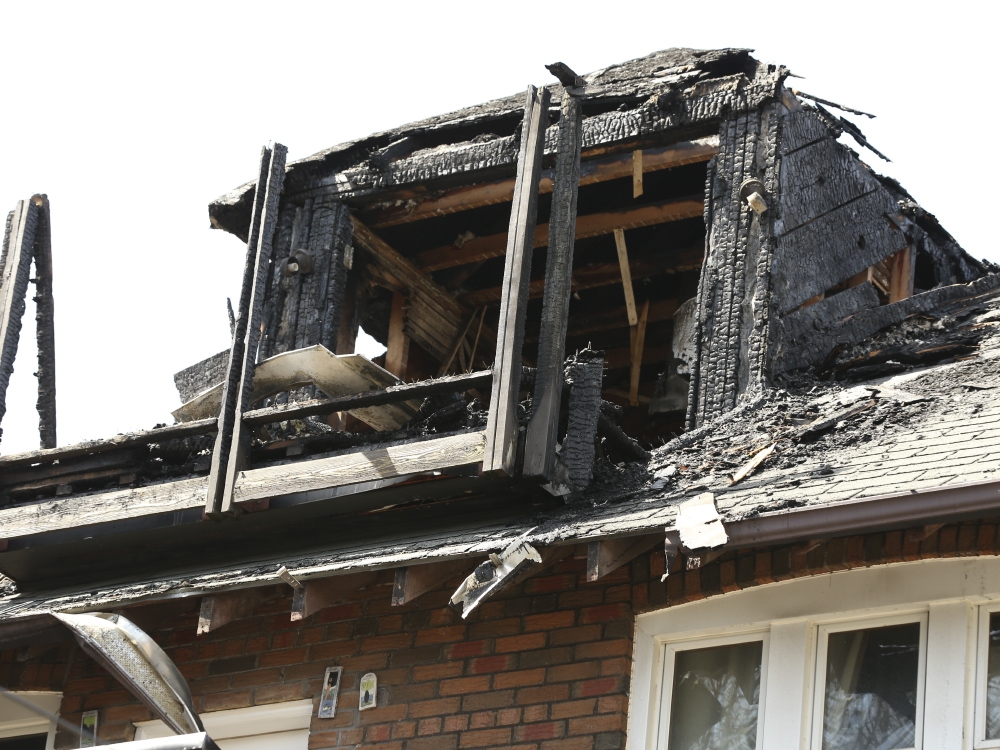 Three people are lucky to be alive after fire destroyed their top-floor apartment in Forest Hill on Saturday morning.

The Toronto Fire Service arrived on the scene shortly after 8:30 a.m. to the three-alarm fire at a house on Avenue Rd. north of Upper Canada College.

The entire top floor of the house and the rear roof deck were totally engulfed in flames and heavy black smoke. Smoke alarms alerted residents to leave quickly.

Michael Villamor, along with his girlfriend Sal and friend Mike Lee, broke the windows and crawled to the front of the house on the steep roof and stood there waiting to be rescued by the firefighters who arrived very quickly and put in stairs for them.

“It was pitch black and I kind of got lost in it,” Villamoor said.

Villamoor thought he could put out the fire with a fire extinguisher, but he quickly realized the gravity of the situation and chose to take out himself, his girlfriend and his roommate.

“In the process of trying to get out, my hair got singed,” he said at the venue on Saturday.

Lee, one of his roommates, said he just woke up and heard some sort of click and thought it was his roommate using the “TV clicker because it’s loud” in the living room and then the smoke alarm went off and Lee thought someone was “boiling eggs or something”.

“After about 10 seconds I opened my room and there was black smoke, you couldn’t see it,” Lee said. “There were flames and I couldn’t breathe.”

“It’s just a weird feeling, like, ‘If I don’t act now, I might die today,'” he added. “We had no choice and we waited for our window to break, which it did, and we went up to the roof.”

The house, which is divided into several rented apartments, was evacuated for fear that the fire would spread – but quick work by firefighters put out the blaze.

The Toronto Fire tweeted on Saturday: “Excellent work from all teams involved.”

The Toronto Fire Service responded to reports of a fire on Avenue Road this morning and rescued 3 occupants trapped on the roof. Excellent work by all the teams involved. #Toronto

The trio – all musicians who had been setting up a recording studio for the past two years – returned to the apartment to retrieve personal musical equipment, including keyboards, speakers and drums.

They’ve already created a GoFundMe page — www.gofundme.com/f/donate-to-help-us-rebuild-our-life-from-the-fire — as they lost a lot of their recording equipment.

— with files by Liz Braun