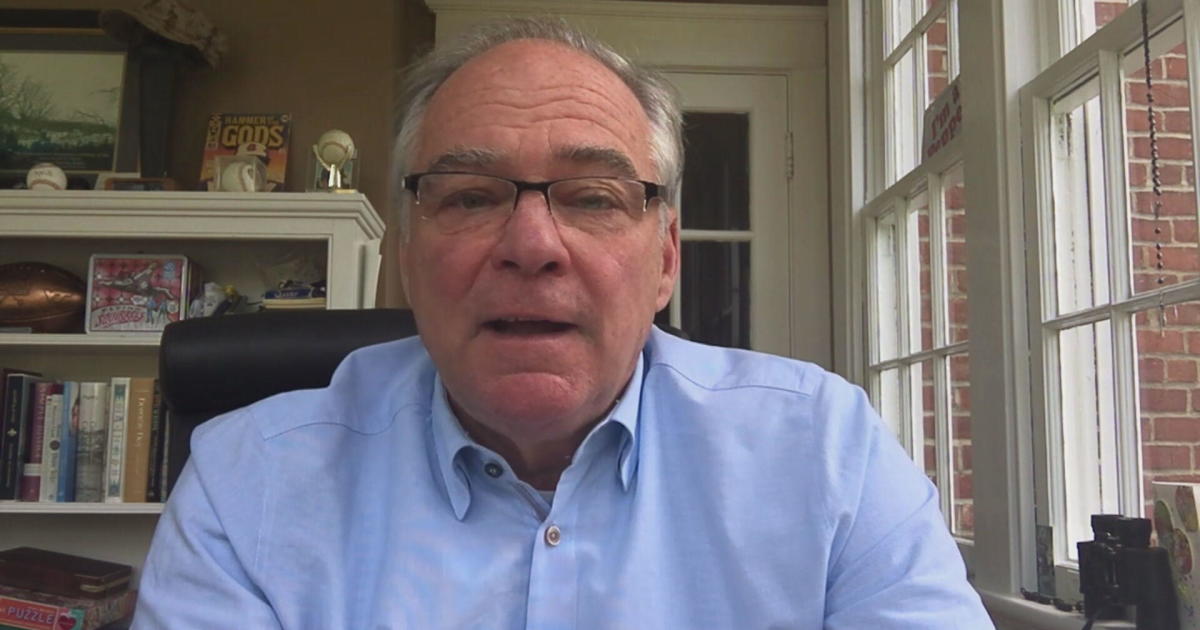 The following is a transcript of an interview with Democratic Senator Tim Kaine of Virginia that aired Sunday, May 1, 2022, on “Face the Nation.”

MARGARET BRENNAN: And now to Senator Tim Kaine, who hails from Richmond, Virginia. Good morning to you, senator.

SEN TIM KAINE: Great to be with you, MARGARET,

MARGARET BRENNAN: Thank you. Well, we woke up to those images of President Pelosi and the top Democrats in Congress walking around downtown Kiev. It is a statement of support. I know that President Biden called for this statement to be supported by $33 billion in congressional funding. How quickly do you think this will be done?

SEN KAINE: MARGARET, we’ll get back to that once we get back to the Senate tomorrow. And I think we need to push it very, very quickly. Obviously, we just did an aid package for Ukraine about a month ago that was about $13 billion. And that’s a dramatic escalation from what we did in 2021 and even before that. But this additional help is needed to help Ukraine win and defeat Russia’s illegal invasion of its country.

MARGARET BRENNAN: Well, when the last $13 billion package was passed, Republican leader Mitch McConnell was on that program and he said, Ukrainians want more money, we’ll give it to them. You don’t hear Republican leaders say, ask me to spend more. But that is exactly what is happening here. So for the Democrats, when you try to take this further, can there be a compromise that this is just a standalone aid package for Ukraine? Or does it need to be combined with things like COVID funding?

SEN KAINE: I don’t think so, MARGARET. You know, you follow the Hill very carefully. The procedure of joining the accounts, separating them is-is-is peculiar and sometimes unpredictable. But no, we don’t need COVID help. We need Ukraine’s help. We must do them together or separately, but we must not wait. And I think that’s what may needs to be for us, is to do both together with the competitiveness account. I think these three big bills: aid to Ukraine, aid to COVID and the law of competitiveness are the three big tasks that we have ahead of us in May.

SEN KAINE: Well, again, we can break it up into smaller pieces or bigger pieces. We need to do this quickly. But remember, MARGARET, in the aid package we put in about a month ago, it was about $6.8 billion for military aid and an equivalent amount for humanitarian aid. That help doesn’t go out the door at the same time. Practically every week President Biden is releasing $500 million, $800 million of aid. And we still have more of that first package to release for Ukraine. We need to get it to them when they need it with the weapons they need. And we’re– we still have some time to get through this next package. But I think my colleagues in Congress on both sides, with very few exceptions, understand how significant this is. There is a bit of bipartisan determination in the Ukraine aid package.

MARGARET BRENNAN: Your fellow Democrat, Senator Coons, was on this show a few weeks ago and said that at least there needs to be a conversation about when the United States would potentially use force in Ukraine. Do you think there needs to be a discussion of authorization, of the use of force?

SEN KAINE: I think it would be premature, MARGARET, but I think there is a common sense that first, if Russia takes action against any NATO ally, NATO article five would require a military response. And that would be—

MARGARET BRENNAN: But why would it be premature if- if President Biden has already said he will not send troops? He has already drawn a line.

SEN KAINE: No-yes. But he also said that the use of nuclear or chemical weapons could change the equation. So now the status quo is that we are providing massive amounts of aid to Ukraine, both the US and NATO allies and others. If there was an invasion of a NATO country, a kinetic or even cyber attack, or if there were chemical or nuclear weapons used in Ukraine, that would change the equation. But for now, I think the right strategy is to flood the zone with military and humanitarian aid.

MARGARET BRENNAN: All right. One of the problems when it comes to COVID help, as you know, is that it has gotten quite tangled up. But what can happen at the US border—

MARGARET BRENNAN: – and the possible expiry set for the end of May of Title 42, which is a pandemic regulation that allows migrants seeking asylum to be denied immediate entry. Is there a way to get around this block? Do you consider it inevitable that there will be a vote on Title 42?

SEN KAINE: I think… I think it will, MARGARET. We need – we need a vote on the COVID relief package. And Republicans have made it clear that they want a vote on Title 42 as part of a discussion about COVID help. I firmly believe, whether in the majority or minority, that there must be amendments and that we must allow amendments to be voted on in the plenary. I- I am a little concerned that, sometimes, majority parties, Democrats or Republicans, relax legislation to try to avoid controversial votes on amendments. But I’m elected by Virgos to vote for things, controversial or not, and if after 28 years in office, I can’t explain a vote for something, I’m not very good at what I’m doing. So I think we’re going to have a vote on the COVID relief package soon, in May, and I think Republicans will be calling for a Title 42 amendment vote as part of that. And we should, you know, see what the amendment is and then vote for or against based on whether it’s a good amendment or not.

MARGARET BRENNAN: But you’ve also been a bit critical of the Biden administration’s plan to allow this border health restriction to expire at the end of May. When is the right date?

SEN KAINE: MARGARET, what I said is this: Title 42 needs to expire.

SEN KAINE: It’s an emergency regulation and needs to be replaced with more permanent procedures and plans to do a better job at the border. And so I was confused about the timing. We would have Title 42 expire on May 23 and then new asylum and border rules would take effect on May 31. I was confused by the government messages about this, but…

MARGARET BRENNAN: Is it clear now?

SEN KAINE: — DHS came up with a pretty comprehensive plan last week with six pillars flooding personnel to the border, which they are already doing, preparing to use expedited removals for individuals who cannot make a credible claim to asylum, for example. More work in Central America to help their economies grow so that the pressure of poor economic conditions that lead to migration is lessened. DHS has now established a plan, and the right answer for the border is not short-term emergency regulation. The right answer is permanent fixes that will help. This was part of our 2013 immigration reform bill that passed the Senate on a bipartisan basis that the Republican House refused to accept.

MARGARET BRENNAN: A quick question for you. I know you suffer from the long-term effects of your COVID infection. There’s already been about a billion-dollar effort underway to study it at the National Institutes of Health. Why is this not enough? And how much more money is needed?

SEN KAINE: MARGARET, I guess I’d say I’m going through a long COVID. There are people who are suffering a lot. I wouldn’t call myself a sufferer. I have a bizarre nervous tingling sensation that feels like my skin is dipped in an Alka-Seltzer that’s coming out 24-7. But I can work, I can exercise, I can do my thing. But as you know, many people with long-term COVID have breathing problems, heart problems, fatigue. You are right. We put a significant amount of money into the American Rescue Plan—

SEN KAINE: —and we’re starting to do important research at the NIH and other institutions. But we need to do more research, disseminate research results, provide information to patients, families, providers, employers, —

SEN KAINE: — and then there will likely be a need to support those who are really suffering from the long COVID.

MARGARET BRENNAN: We will continue to cover that in this show as well. Thank you, senator.

MARGARET BRENNAN: We’ll be back with a lot more. Stay with us.