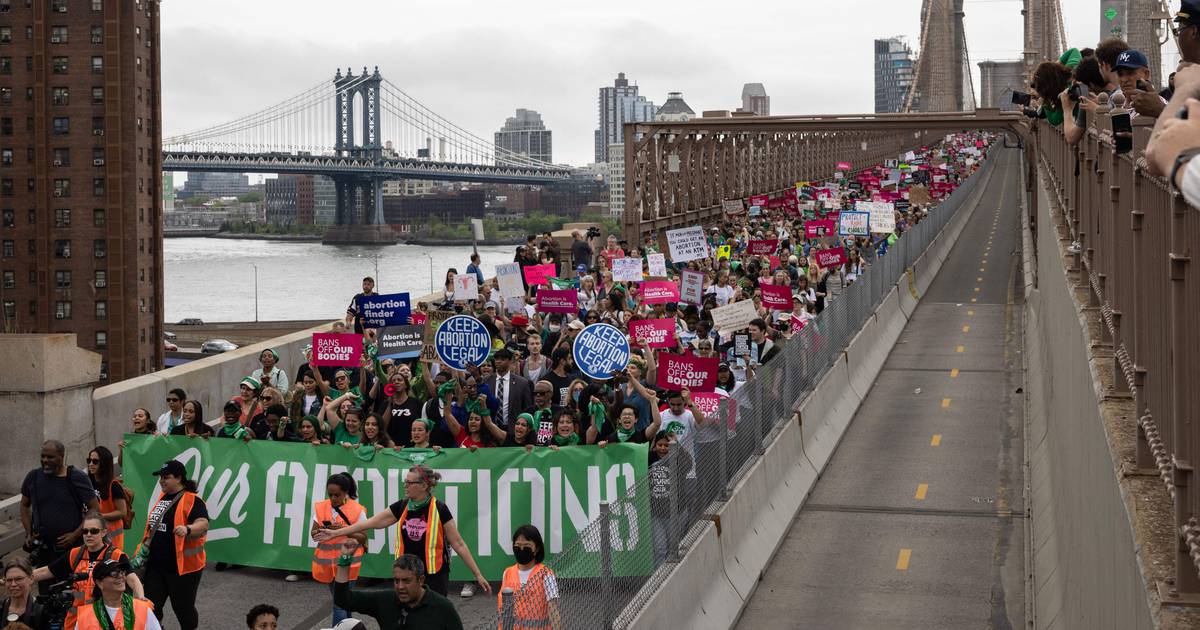 Thousands of passionate abortion rights protesters, with some raising hangers above their heads, marched across the Brooklyn Bridge in a massive rebuke Saturday of the Supreme Court’s plans to overturn Roe v. wade

Crowds of all genders, ages and ethnicities gathered in Brooklyn’s courthouse plaza before crossing the Brooklyn Bridge into Lower Manhattan, waving placards and singing along the way in support of a woman’s constitutional right to abortion.

“Hands off our bodies!” the crowd roared in response to the leaked draft opinion, indicating that the country’s highest court would overturn the historic decision. “We can’t go back!”

Among the protesters was Gilda Perkin, an 88-year-old Manhattan artist familiar with the history of that battle.

“I’ve been at this for a long time, there’s no going back,” she said. “I am passionate about this subject and I will not stop. Women need to be strong and speak up. We can’t expect anyone else to fight for us, so we have to do it alone.”

Fellow marcher Victoria Micalizzi, 22, offered the same fervent support for the cause on a warm spring afternoon.

“It’s not about abortion,” said the woman from Bushwick, Brooklyn. “It’s about control and it’s disgusting that history is repeating itself again. We need to fight for the right to abortion.”

Some protesters carried pro-rights posters as the music played. Drummers pounded outside downtown Manhattan courthouses as protesters chanted, “We can’t go back.”

Barbara Yoshida, 77, of Manhattan, recalled her first arrest at a demonstration in the early 1990s, where protesters closed down the Holland Tunnel on July 4th.

“This is not my first time in this fight,” she said. “I came here again because I still don’t believe that I have to fight again… This fight cannot be lost, so we need to know our history, we need to fight and we cannot remain silent. We need to stand up and fight.”

The New York meeting was one of hundreds of “Ban Our Bodies” marches and rallies across the country, where protesters expressed their outrage after reports that the court’s conservative majority was about to reverse the 1973 ruling.

Thousands of others gathered outside the Washington Monument before marching to the Supreme Court, where they were greeted by two layers of security fences.

“I can’t believe that at my age, I still have to protest this,” said Samantha Rivers, a 64-year-old federal government official at the rally in DC.

Brooklyn Heights resident Sabrina Gates, 45, said the federal government should not impose its will on American women.

“Lawmakers need to listen to their constituents because 70% of Americans believe in affordability of health care,” she said. “So we as a people need to vote and put people in place who really have our best interests at heart.

“I’m very proud that New York and the city are so progressive, even though we still have a lot of work to do,” added Gates. “Let’s fight and let’s have our voices heard.”