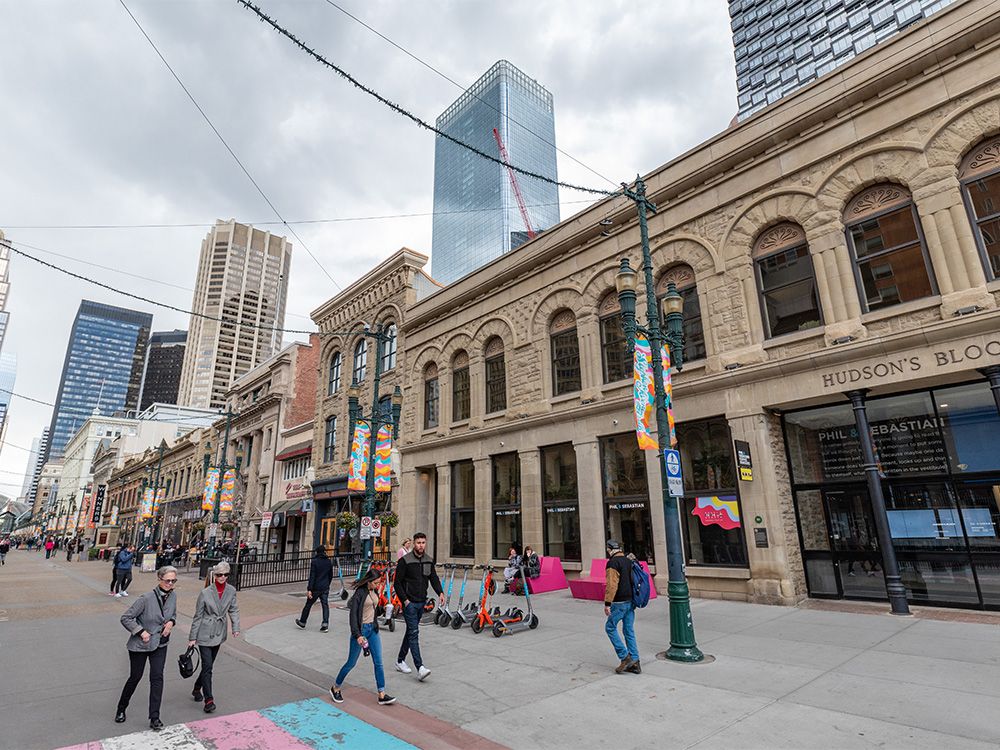 A proposed massive downtown development along Calgary’s Stephen Avenue has major implications for several historic sites in the area.

Josh Traptow, CEO of Heritage Calgary, said 15 historically significant sites would be affected by the project, including five that are legally designated as historic buildings.

The proposal, by local firm Triovest, is for a three-tower mixed-use complex that would occupy nearly the entirety of 7th and 8th Avenues SW between Center Street S. and 1st Street SW One of these towers, a 66-story high-rise condominium sky, would become the tallest building in western Canada, if built.

Sites designated as municipal heritage resources cannot legally be demolished or significantly altered, Traptow said, leading to questions about how the developer plans to approach these buildings.

“We hope to learn from the candidate how they are proposing to do this project, if they are looking to have these buildings de-designated and what their plans are for these buildings that are currently legally protected,” Traptow said. .

Under a development permit and blueprints submitted by Triovest to the city, the two westernmost buildings on the block – the Central United Church and the historic BMO Building – would be retained, as would some building facades. Some buildings on the east side of the block are marked for demolition.

The Calgary Planning Commission will evaluate and make a recommendation on the application before passing it on to the city council.

It’s rare for large commercial developments in Calgary to involve designated historic sites, Traptow said. In 2017, Harvard Development appeared to have a 27-meter-tall brick chimney in Eau Claire with no designation for its development plans, but that project has not progressed.

The size and scope of the Triovest proposal is unheard of in recent memory, according to Traptow.

“This is the biggest project I’ve ever seen that involves so much heritage,” he said. “Most of the time it’s a single residential house, that’s usually what we see. I’m trying to think of what the last demolition of a downtown commercial site would be, and I can’t think of anything in my head.”

The city council has the authority to terminate heritage designations, Traptow said. Two sites on the Avenue Stephen side of the block are also designated as heritage resources provincially, meaning the provincial minister of culture would have to rescind this designation before development could take place.

Area Councilor Terry Wong said Tuesday, after news of the proposal, that he hopes the city administration, as well as his fellow councilors, will preserve “the history and heritage of Stephen Avenue Mall.”

“This is something I’m proud of, it’s our history and heritage, and we don’t want to lose that,” Wong said. “We’ve seen several implementations where this was done very effectively, but at the same time building very modern contemporary buildings.

“I think the most important part is, of course, the cityscape and ensuring that the cityscape represents a vibrant area that people can recognize as a heritage site, but also the modern kind of entertainment and convenience that they want to see.”

Some of the buildings on Stephen Avenue are among the oldest in Calgary, dating back to the 1890s, said Traptow, who fears a possible board decision to delist the sites from the heritage list could pave the way for future projects.

“This sets a very dangerous precedent that basically every designation that has been approved by the board in the last 30 years, since they designated the locations, could be canceled simply because of redevelopment,” he said.

— With files from Josh Aldrich and Stephanie Babych