People stopped looking for Mike Myers some time ago. This is not uncommon for most “Saturday Night Live” alumni, even those who enjoy a certain notoriety after their tenure at Studio 8H inside 30 Rockefeller Plaza ends. The David Spades, Dana Carveys and Will Fortes of the world will always be with us, making appearances or appearing in sitcoms.

But Myers is among the greats – one of the guys who didn’t just make movies, but set the standard for what an “SNL” movie should be. “Wayne’s World” and the “Austin Powers” movies – “Austin Powers: International Man of Mystery”, “Austin Powers: The Spy Who Shagged Me” and “Austin Powers in Goldmember” – have made Myers one of the hottest comedy stars of the 1990s.

In the Aughts, he insinuated himself into the hearts of Millennials and Gen Z, becoming the voice of Shrek, joined by “SNL” star Eddie Murphy.

Comedy fans have always wondered what Murphy was up to, particularly as his legacy was kept alive by the heirs to his mantle – Chris Rock and Dave Chappelle, among others. Myers, on the other hand, may have been a little easier to forget because he was so attached to a moment on the show where his character and his catchphrases defined him. He was great at getting lost under wigs and latex prosthetics and funny voices. As his featherweight Netflix miniseries “The Pentaveract” proves, he still is.

RELATED: David Spade: This Is Why Eddie Murphy Hated Me

If you’re not impressed by the eight rubbery faces that Myers runs through its six episodes, maybe it’s because they’re only slightly removed from versions of their characters you’ve laughed at before but whose humor feels outdated in 2022.

Myers’ return to the classic comfort of rubber masks and chewing gum feels less like a question of “Where has he been?” than “Does he realize what year we’re in?

Even the show’s setting, inside a ’60s-style mod lair that houses the support structure for a five-man secret society that quietly shapes society for the greater good, has an adjacency to Dr. Evil. That’s good for anyone whose love of all things shagadelic hasn’t waned.

Various profiles over the years mention periods of four or five years during which he lets ideas cook, which sometimes produces charming pieces like his 2013 documentary “Supermench: The Legend of Shep Gordon” and other times results in “The Love Guru”, an abominable stack best left in 2008.

To anyone paying attention to events in the general grad universe of “SNL,” Myers’ return to the classic comfort of rubber masks and chewing gum feels less like a question of “Where has he been?” than “Does he realize what year it is?”

Mike Myers as Ken Scarborough, Lydia West as Reilly Clayton and Mike Meyers as Anthony Landsdowne in “The Pentaverate” (Netflix)Not every “SNL” actor achieves greatness, but those who enjoy some career longevity show a willingness to move beyond the physical clowning that allowed them to enjoy the spotlight and Lorne Michael’s favor. Some former “SNL” artists have found success staying at their wheelhouse, namely Seth Meyers, who has transitioned from his successful “Weekend Update” career to making the “Late Night” brand more politically incisive.

Others continue to have such a strong presence in popular culture that we don’t need to explain why. We simply have to leave their names: Tina Fey. Amy Poehler. Kristen Wiig. Maia Rodolfo.

There’s Will Ferrell and Andy Samberg, guys who can still carry a movie, in Ferrell’s case, or in Samberg’s case a comedy.

Artists like Bill Hader and Adam Sandler lingered on dramas long before we stopped associating them with their late-night silliness. Wiig did the same, as did Rudolph and Fey. Their work in independent films has allowed us to see their reach to exonerate them from getting stuck in comedies forever, even if comedy is where their hearts may be as artists and producers.

Hader, in fact, provides the current version of the ideal model via “Barry”, a dark comedy as night that also allows him to be dark, vulnerable and downright scary. Even like Stefon, Hader was in his own skin.

Murphy has, and it’s given him a string of successful family movies, starting with the remake of “The Nutty Professor.” Long before that, he also proved that he could star in “48 Hours” action movies. Afterwards, he was acclaimed with an Oscar nomination for his work on “Dreamgirls” and a Golden Globe nomination for “My Name Is Dolemite”.

I cite these examples to show that while these people have established themselves as acting forces of comedy, Myers has never fully escaped the closet of prosthetics and parodies he built for himself. Maybe it’s on purpose.

His prime example of direct playing, “54”, became a cult classic, but it was bombed when it was first released. That, along with his low-key appearance in “Inglourious Basterds,” proves he’s capable of more than wacky jokes. (Another memorable Myers dramatic role was his impromptu appearance during the Hurricane Katrina fundraising telethon alongside Kanye West, when the latter said, “George Bush don’t care about blacks.”) 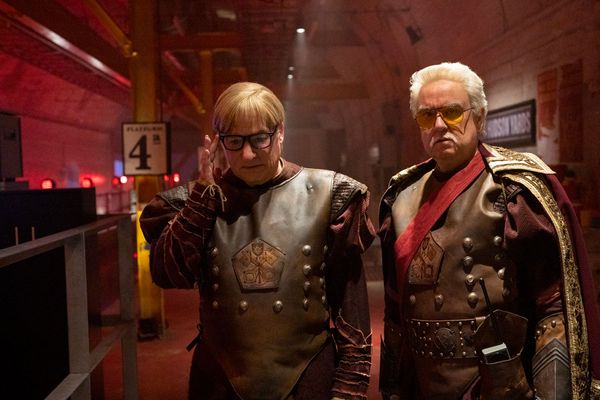 Mike Myers as Ken Scarborough, Richard McCabe as Exalted Pikeman Higgins in “The “Pentaverate” (Zoe Midford/Netflix)“The Pentaveract” is an extension of a joke Myers drops on his 1993 vehicle “So I Married an Ax Killer”, one of those movies that was more appreciated in its video rental afterlife than in theaters. . It’s also one of the few times we see Myers’ natural face, playing a nice, normal guy who isn’t obscured by fake cheeks, contact lenses, and synthetic hair. Of course, he also plays a lot of these types as well. But it came in the same year as “Wayne’s World 2”, neither of which performed well.

Four years later came the first “Austin Powers”. . . and since then, the masks have changed, but the mood hasn’t.

Admittedly, there’s a simple sweetness to “The Pentaveract” that defies criticism, which is probably why Netflix hasn’t made it available to critics for review. People who love Myers’ work are sure to love him, as will those who share his deep taste for British humor, Monty Python in particular. Papers he’s written for Jennifer Saunders (“Absolutely Fabulous”) and Keegan-Michael Key pay homage to his legacy in ways his fans should appreciate.

Regardless, it’s a very strange move for an artist who has been out of the spotlight for so long to return with a throwback engine fueled by nostalgia for the highlights of his career. His participation in David O. Russell’s upcoming period piece might change his direction yet again, but for now, it’s as if he’s aware that people tend to love a concept of him as opposed to who he is. To his audience, Myers is a jovial fairy-tale ogre, or a cunning spy, or a random Canadian with a Scottish accent. But it also provides an answer as to why we haven’t been following Myers all this time. It could be because we’ve never really seen him before.

“The Pentaverat” is currently streaming on Netflix. Watch the trailer below, via YouTube.