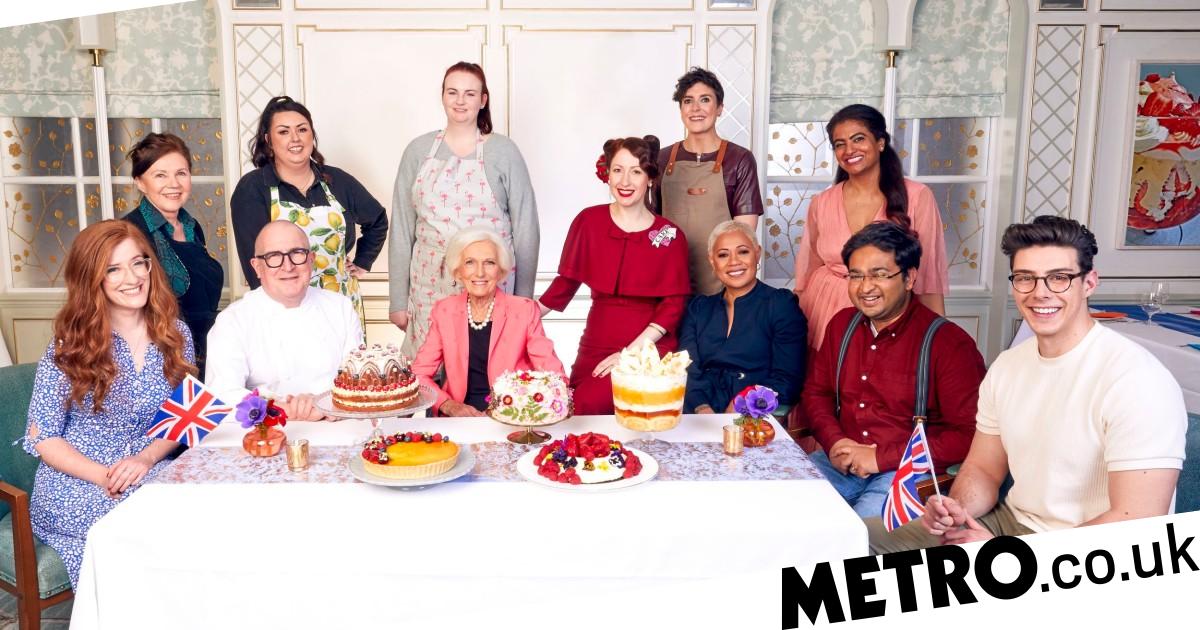 The Jubilee Pudding: 70 Years in the Baking offers baking stars a once-in-a-lifetime opportunity to celebrate the queen’s platinum jubilee.

Five home bakers will mark the monarch’s 70th year on the throne by making their own cake, pie or pudding, which they think would earn the royal seal of approval.

The winning creation will go down in British history and 5,000 people signed up to participate, aged between 10 and 80.

Now whittled down to just a handful of finalists, they will compete on the BBC tonight to bake a pudding fit for the queen.

When does Jubilee Pudding start?

The cooking show airs tonight (Thursday 12 May) at 8pm on BBC One and will be available to stream on iPlayer.

Who are the finalists?

Competitors will face off against a panel of bakery experts, hoping to impress.

The five finalists include Susan Gardner, 65, of Argyll and Bute, who is a retired sales manager and now works for the National Trust.

Then we have Shabnam Russo, mother of two, a skin care expert in her late 30s.

She will be serving a pink phalloda cake to reflect the Queen’s love for the Commonwealth.

Her dessert also has a personal touch, as it’s based on her grandparents’ favorite pudding.

The couple lives in Mumbai and enjoys the milk-based iced dessert, developed during the Mughal empire.

The third finalist is Jemma Melvin, 31, a copywriter from Southport on Merseyside.

Their pudding is inspired by the lemon posset at the Queen’s wedding to Prince Phillip in 1947.

Kathryn MacLennan, 29, is the fourth finalist and is a songwriter and oboist from Oxfordshire.

Your cake will put its own spin on an explosion of flavor as you serve a passion fruit and thyme frangipane tart, inspired by your late grandmother’s favorite cake.

Last but not least, we have Sam Smith, 32, a lawyer from Warickshire.

Sam will be putting his own spin on the beloved Victoria sponge, adding a twist with the queen’s favorite dubonnet – a sweet and aromatic wine-based aperitif.

Who are the judges?

Jubilee Pudding may be celebrating Queen Elizabeth, but would it be a cooking show without the Culinary Queen?

Of course, Mary Berry is on the panel, and she is very excited to be a part of bakery history.

Talking about why she wanted to be involved with the show, she told BBC News: “I thought it just seemed like a wonderful idea. Jubilees are very special, people will get together, have street parties and come together for the occasion as families and communities.

“It’s a wonderful idea that maybe this Jubilee pudding is made for everyone who celebrates, whether it’s street parties, family occasions or even just two people. The Jubilee weekend will be as if the country were united.’

The Jubilee Pudding: 70 Years in the Baking airs tonight on BBC One and iPlayer.

If you have a celebrity story, video or photos, please contact the Metro.co.uk entertainment team by emailing [email protected], calling 020 3615 2145 or visiting our Submit page Stuff – we love to hear from you.

MORE: Kourtney Kardashian ‘cried hysterically’ for hours after breaking Travis Barker’s engagement ring: ‘How could I do that?’

MORE: Eurovision: What is The Rasmus’ best-known song and when was it on the charts?