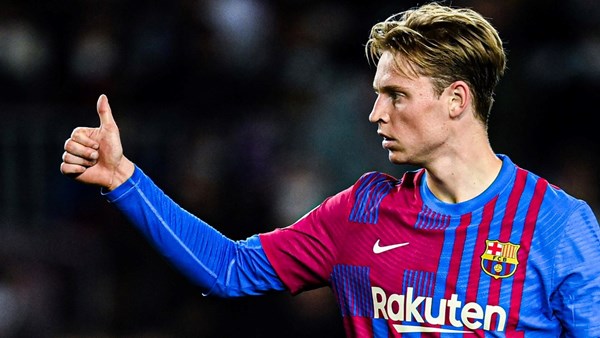 Moataz Al Shami (Dubai)
The Dutch international Frenkie de Jong, the Barcelona player, has become the talk of the hour in the international media, after he entered the interests of Manchester United, who put up a large number to obtain the services of the player, which in turn is one by one to reach a historic number with “Bulugrana” in the case of his departure, Barcelona is going through financial difficulties, as it has not yet been able to close new deals for the next season, due to budgetary crises and the need to get rid of it. financial burden, to make room for any additional contracts.
It is for this reason that Barcelona seem willing to let go of De Jong, with Manchester United’s massive €60m offer plus an additional €20m as a bonus in their bid to secure the Dutch international’s services.
According to “Marca”, Barcelona’s management believes that the offer is very good and cannot be rejected, due to the difficult financial situation that the club is going through, although Xavi, the team’s coach, admires the performance of De Jong, who is a of the team’s “highest paid” players, and previously announced that he did not wish to leave Catalonia.
“Marca” indicates that Manchester United’s insistence and manager Eric Ten Hag’s interest in including his former player in Dutch Ajax, in addition to the pressure that Barcelona can exert on the player, could lead him to change his mind and agree. in moving to Ajax. Awarded League.
And if Barcelona manage to sell De Jong to Manchester United, the player will become the second most expensive deal in the club’s history after Neymar, who left the club for Saint-Germain “with a release clause” of 222 million euros in 2017.
De Jong arrived at Camp Nou in the summer of 2019, for 75 million euros, and in his first season he scored two goals and scored 4, while in his second season he played 51 games, during which he scored 7 goals and scored 8, and in the season Last year he participated in 47 games, scored 4 goals and scored 5.