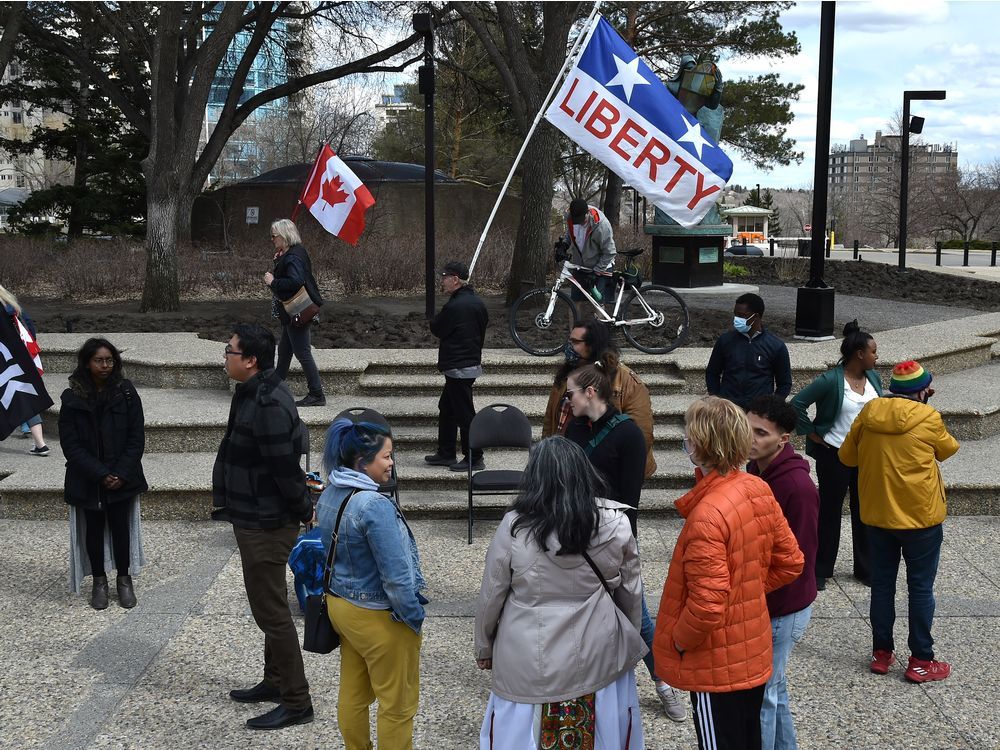 Supporters of a bill that would require the Alberta government to collect race-based data across all areas of its operations rallied Saturday after UCP MLAs dealt a major setback to the bill.

Bill 204, introduced by NDP MLA David Shepherd, would create an anti-racism office within the government of Alberta and would require all departments to collect data aimed at identifying racial disparities in government programs and policies.

The legislation effectively died last week when a UCP majority committee refused to recommend it for debate in the legislature.

About two dozen proponents of Bill 204 protested the measure outside the legislature on Saturday.

The rally overlapped with an anti-COVID restraint “freedom rally” outside the nearby federal building, which created a tense moment as the throng of flags passed (and, in some cases, through) the Bill 204 event. After arguing with the organizers, one of the participants in the freedom rally ended up joining an indigenous-led prayer circle organized by proponents of bill 204.

Black, indigenous and other communities of color often have “very different experiences in accessing programs, processes, services provided by the provincial government,” Shepherd said in an interview.

Bill 204 would require the collection of racially aggregated data “in all areas where we provide programs, processes and services within the government of Alberta. So in the health system, in the education system, in the justice system, in children’s services.”

Shepherd said some agencies already collect racial data, such as police services and the child welfare system. Such data revealed the overrepresentation of non-white citizens among those “carded” by the police, as well as the disproportionate presence of indigenous children in government care.

Shepherd said community groups have asked the Ministry of Health to collect race-based data on the COVID-19 pandemic to no avail. Similar data collected in Ontario showed that “racialized communities have been disproportionately impacted by COVID 19.”

He added that Alberta does not collect consistent statistics on graduation rates among black and immigrant students.

“Unfortunately, it seems that with the UCP government there is simply no desire to discuss this,” he said.

UCP MLA Devinder Toor voted against the debate recommendation on Bill 204. He called the idea “noble” but said he needed to hear more consultations on the topic.

—with files by Ashley Joannou