An interim government has been proposed in Sri Lanka three years before the next election to stabilize the country and restore peace amid the protests over the shortages of fuel, food and medicine.

President Rajapaksa dissolved his cabinet last week after 41 MPs walked out of the government to become independent.

The president’s brother, Mahinda Rajapaksa, is currently Sri Lanka‘s prime minister and would be replaced in the interim government.

The Sri Lanka Freedom Party (SLFP) said the independents would speak with other political parties to reach a solution.

Udaya Gammanpila, chief of the Jathika Hela Urumaya party, said: “The main proposal is to have an all-party committee to make key decisions and the appointment of a new prime minister and limited cabinet.”

He also said: “We want this before a new election. We have to reverse shortages and stabilize the economy.”

Protesters in the country have demanded the country’s president resign as they blame him for not managing the crisis well.

Locals in Sri Lanka have been forced to queue to buy fuel, cooking gas, food and medicine.

There have also been widespread power cuts as locals have struggled to cope with the shortages.

The nation will start talks with the International Monetary Fund (IMF) later this month to form a solution on its debt crisis.

Please use Chrome browser for a more accessible video player 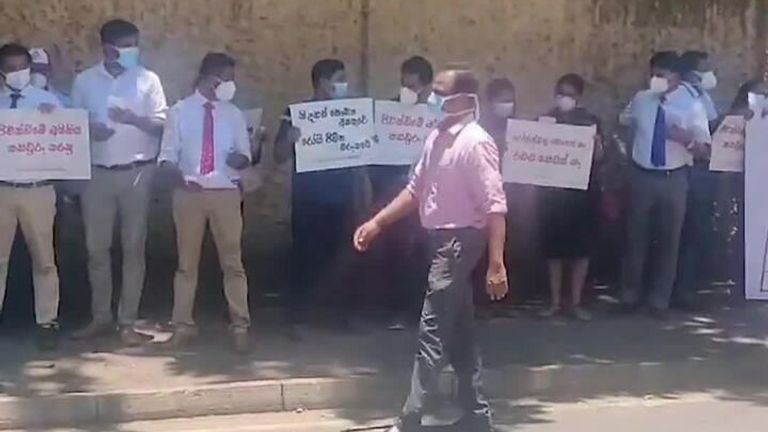 The IMF has said it is very concerned about the country’s economic crisis and is engaging with their finance ministry.

Sri Lanka has also reached out to India and China for help.

The SLFP’S general-secretary Dayasiri Jayasekera said: “Talks with the IMF will need a stable government capable of
implementing clear policies.

“This is necessary to repair the economy and bring relief to the people.”

Cardinal Malcolm Ranjith, the archbishop of Colombo, told protesters: “Today the country needs a major change and a new beginning.

“We ask from every citizen of this country to come together and change this system. To get together and tell these people to leave.

“It’s enough now, it’s enough destroying the country, now leave and hand it over to someone who can govern this country.”

President Rajapaksa has been accused of borrowing too much money from finance projects which are not returning enough profit for Sri Lanka.