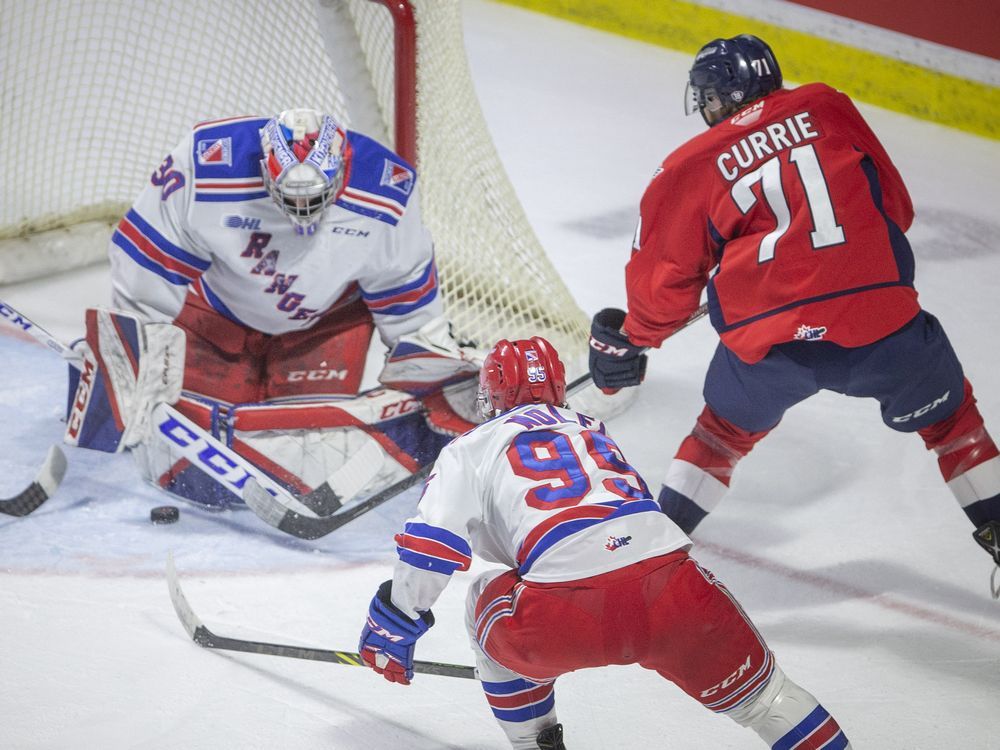 Each playoff series has its own unique obstacle to overcome.

In the opening round, the Windsor Spitfires had to overcome an impressive performance by one of the league’s top goalkeepers.

In the second round, against seventh-seeded Kitchener Rangers, it was the Spitfires’ tendency to fall behind early.

“Both series were tough and we had to find ways to win,” said Spitfires forward Josh Currie. “We will keep fighting and coming back.”

That was true again on Saturday as the Spitfires bounced back from an opening two-goal deficit to beat Rangers 3-2 ahead of 4,470 at the WFCU Center.

“I’m proud of the guys,” said Spitfires coach Marc Savard. “It wasn’t a great start, but we slowly got back to work.”

With the win, the Spitfires won the best-of-seven series 4-1 and claimed a spot in the Western Conference Finals for the first time since 2011.

“You want to extend your junior career as long as you can,” said Spitfires supporter Louka Henault. “It’s a great feeling. You want to get as far as possible.”

Windsor had a chance to end his first-round streak against Sarnia, but lost Game 5 at home to extend the series, which ultimately ended in Game 6.

“You don’t want to give teams hope,” Currie said.

But that’s what Rangers achieved early on Saturday after jumping to a 2-0 lead in the 20th minute. Matthew Sop redirected a shot to Spitfires goalie Matt Onuska, and Ty Hollett had a point kick that hit him and went in.

“They gave us a good series,” Savard said. “They played well and we knew they would play everything against us in the first half.”

“Honestly, we all looked at each other and said, ‘We can do this,’” Currie said.

Windsor had a 14-1 lead on shots in the second period as Henault received a feed from Wyatt Johnston and defeated Kitchener’s goalkeeper Pavel Cajan.

“With all the chances we got, it was almost a sigh of relief,” Henault said. “It was almost like we could get our heels if we kept pushing.”

Defender Michael Renwick tied the game at 2-2 in the final minute of the second period as he rounded the net and landed a shot on Cajan’s shoulder.

“We had to make some adjustments,” said Savard, whose team beat Rangers 14-2 in the second period of the series. “We are adjusting all year.”

Windsor scored the winning goal in the third period in the power play with defender Nathan Perrott launching a single shot that defeated Cajan midway through the third period.

Rangers failed to equalize at Onuska but came close in the final 15 seconds as the Windsor goalkeeper deflected Francesco Pinelli, Reid Valade and Adam Zidlicky in a wild scramble.

“He’s been a rock for us back in the day,” Henault said of Onuska. “It allows us to play our game.”

The Spitfires will face the Flint Firebirds in the Western Conference Finals. Flint stepped forward, pulling out the Sault Ste. Marie Greyhounds on Saturday in five games with a 7-1 home win.

The Eastern Conference final will feature the Hamilton Bulldogs and the North Bay Battalion, who eliminated Kingston on Saturday with a 6-5 victory.