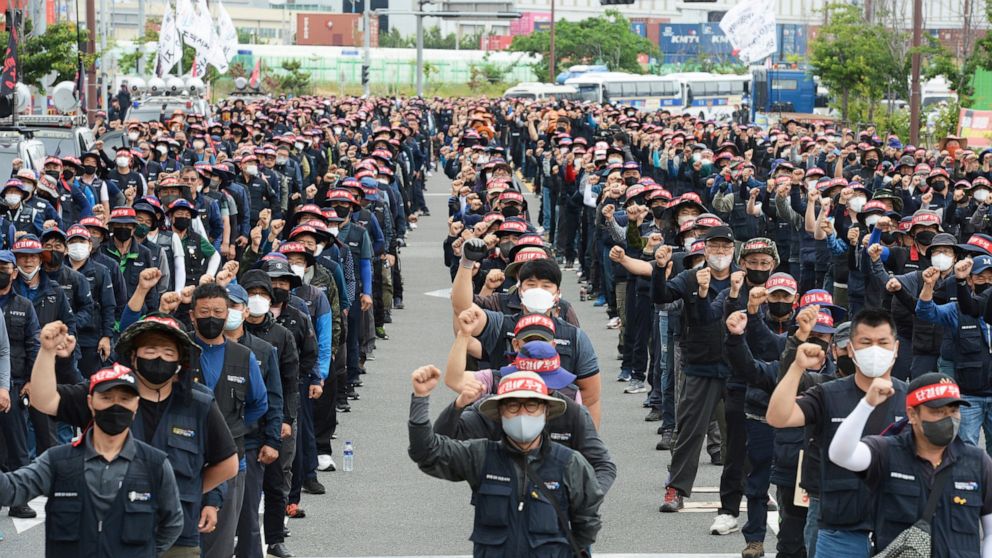 A prolonged strike could eventually worsen global supply chains already battered by Russia’s invasion of Ukraine and China’s pandemic restrictions. But the strike’s impact so far has been largely limited to South Korea’s domestic industry. The 10th largest economy in the world, the country has not reported any major disruptions in exports of important items such as semiconductors.

The fourth round of talks between striking truck drivers and government officials on Sunday failed to reach an agreement. Transport Ministry officials said they would try to continue negotiations to end the strike, but Cargo Truckers Solidarity said on Monday it had no immediate plans to resume negotiations.

At the heart of the dispute are truck drivers’ requests for a guarantee of the minimum wage amid rising fuel prices. It is not known what exactly disrupted Sunday’s talks, but the truckers’ association said the government had refused to accept its calls for “a more active stance” on the minimum wage requirement.

The Transport Ministry said about 6,600 truck drivers gathered on Monday at 14 locations in South Korea. But Cargo Truckers Solidarity said far more truckers were refusing to work, staying at home or elsewhere rather than attending rallies.

South Korea’s auto, steel, petrochemical, cement and other sectors were hit hard by the strike.

Factories were unable to produce 5,400 cars as scheduled due to a delay in component deliveries. The planned shipment or delivery of 450,000 tonnes of steel, 500 billion won ($390 million) of petrochemicals, 810,000 tonnes of cement and 640,000 tires were also delayed, the Ministry of Commerce, Industry and Energy said in a statement.

But the ministry said the disruption to South Korea’s freight transport had not reached a level that threatened global supply chains. He also said he had not received reports of significant disruptions to exports of semiconductors, automobiles and other important items.

Observers say some companies ordered supplies in advance in anticipation of the strike.

“The strike is affecting our country’s domestic supply chains, not global ones,” said Chang Sangsik, head of a supply chain office at the Korea International Trade Association in Seoul.

“Some foreign companies make finished products using parts and intermediate products made by South Korean companies,” he said. other countries, but such a situation has not yet arrived”.

Chang said many foreign companies hold extra inventories that can sustain supply shocks for weeks or even several months.

Lee Jang-Gyoon, lead researcher at the Hyundai Research Institute, said truckers’ strikes could still affect global supply chains if they continued much longer, as a delay in freight transport would hamper productions.