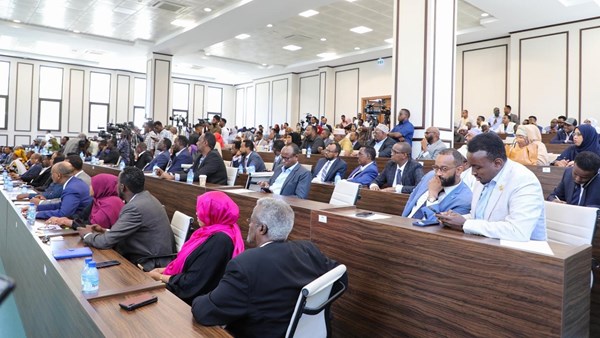 Somali lawmakers gathered on Sunday in a high-security hangar to choose a new president in a vote needed to ensure the impoverished country, ravaged by three decades of conflict, continues to receive financial aid from abroad.
Out of a crowd of 35 candidates, former presidents Sharif Sheikh Ahmed and Hassan Sheikh Mahmoud are the favorites, although during their presidency they failed to stamp out corruption or end the country’s war against Islamist militants, analysts say.
The UN-backed vote was delayed for more than a year due to government disputes, but elections are needed this month to ensure the continuation of the International Monetary Fund’s $400 million program.
The elections come amid Somalia’s worst drought in 40 years and a backdrop of violence in the country due to al-Shabab attacks, fighting between security forces and clan rivalries.
A suicide bombing claimed by al-Shabab on Wednesday injured seven people during political rallies near the hangar where voting is taking place in the capital, Mogadishu.
On Friday, fighters from a Sufi Islamist group clashed with government forces in Galmudug state. There is a curfew in some parts of Mogadishu on Sunday, streets are quiet and shops are closed.
While even holding the vote is a success in itself, few in the country of 15 million people expect real progress. The main candidates are old men from the past who have done little to help Somalis, and these ballots are traditionally dominated by bribery.
It seems unlikely that the current president, Muhammad Abdullah Muhammad, will be re-elected after losing support in last month’s parliamentary elections.
* “There is no life in Somalia”
Somalia is still unable to hold a popular vote due to insecurity and the government’s lack of full control over anywhere outside the capital. African Union peacekeepers guarded the polling place within a Green Zone-style “green zone” in Iraq with the arrival of politicians who exchanged side conversations and listened to Somali music.
Voting should take place in two or three rounds, with the result expected overnight.
“The only hope we have is this election. There is no life in Somalia. We study and then the terrorists blow us up. If there is no peace, education is useless,” said medical student Nur Ibrahim.
In addition to former presidents Sharif Sheikh Ahmed (2009-2012) and Hassan Sheikh Mahmoud (2012-2017), analysts say the president of the semi-autonomous region of Puntland, Said Abdullahi Dani, also has a good chance.
Only one of the candidates is a woman, former foreign minister Fawzia Yusef Adam, but she is not expected to gain much support in the rigid patriarchal society.
Sharif Sheikh Ahmed, a former Islamic leader, took over a Western-backed transitional government in 2009, established the national army and helped drive al-Shabab out of Mogadishu, although he returned to the provinces. Hassan Sheikh Mahmoud is an academic and peace activist.
“Today everyone is watching from behind the doors of Mogadishu,” said Farah Ahmed, an elderly man from Mogadishu.