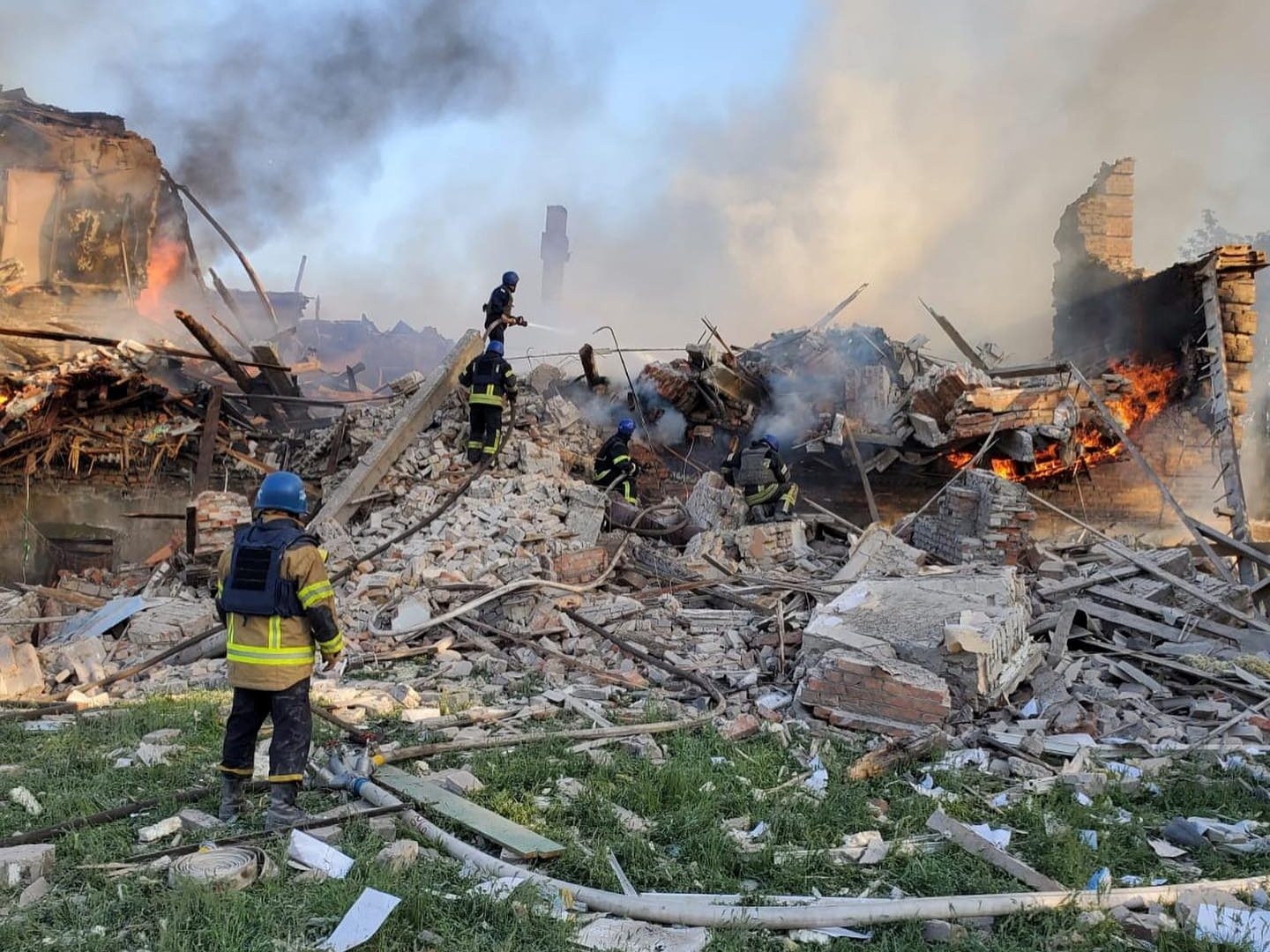 ZAPORIZHZHIA – 60 people are feared to have been killed when a bomb hit a school in a village in eastern Ukraine, the regional governor said on Sunday, as Russian forces continued to bomb the last stronghold of Ukrainian resistance in the port of Mariupol in southeast.

The governor of the Luhansk region, Serhiy Gaidai, said the school in Bilohorivka, where about 90 people were sheltered, was hit on Saturday by a Russian bomb, setting it ablaze.

“There is almost no hope that anyone survived. The aerial bomb exploded in the middle (of the building),” Gaidai wrote on the messaging app Telegram. “At the school, there were approximately 90 people, 27 were rescued. About 60 people were probably killed.”

Reuters was unable to immediately verify his account. There was no response from Moscow to the report.

Ukraine and its Western allies have accused Russian forces of attacking civilians in the war, something Moscow denies.

In Mariupol, the deputy commander of the Azov regiment, hiding in the immense steelworks of Azovstal, asked the international community to help evacuate the wounded soldiers.

“We will continue fighting as long as we are alive to repel the Russian occupiers,” Captain Sviatoslav Palamar told an online news conference.

More than 170 civilians were evacuated from the Mariupol area on Sunday, bringing the total to about 600 with safe passage during a week-long rescue operation, the UN said.

As the fighting, now in its third month, continued, with officials in eastern Kharkiv reporting more casualties from Russian bombing, leaders of the Group of Seven industrialized countries vowed on Sunday to deepen Russia’s economic isolation and “elevate” a campaign. against Kremlin-linked Elites.

US President Joe Biden and other G7 leaders held a video call with Ukrainian President Volodymyr Zelenskyy in a show of unity ahead of Russia’s Victory Day celebrations on Monday.

The G7 said it was committed to eliminating or banning Russian oil and denounced President Vladimir Putin’s invasion of Ukraine.

“Their actions shame Russia and the historic sacrifices of its people,” the group said in a statement, referring to Soviet Russia’s role in the defeat of Nazi Germany 77 years ago.

Washington also unveiled another round of sanctions targeting more executives and companies as part of a broader effort to isolate Russia and limit resources used to advance the war. It also announced a new policy of visa restrictions on more than 2,500 Russian military officers and Russian-backed forces in Ukraine, according to a State Department fact sheet.

In the Ukrainian-controlled city of Zaporizhzhia, about 230 kilometers northwest of Mariupol, dozens of people who had fled the city and nearby occupied areas were waiting to register at a parking lot set up for evacuees.

“There are still a lot of people in Mariupol who want to leave but can’t,” said history teacher Viktoria Andreyeva, 46, who said she had just arrived in the city after leaving her bombed home in Mariupol with her family in mid-April.

“The air feels different here, for free,” she said at a tent where volunteers provided food, basic supplies and toys to the homeless, many traveling with young children.

In an emotional speech on Sunday for Victory Day, as Europe celebrates Nazi Germany’s formal surrender to the Allies in World War II, Zelenskyy said evil had returned to Ukraine with the Russian invasion, but his country would prevail.

Putin says he launched a “special military operation” on February 24 to disarm Ukraine and rid it of anti-Russian nationalism fostered by the West. Ukraine and its allies say Russia has launched an unprovoked war.

Mariupol is central to Moscow’s efforts to connect the Crimean Peninsula, taken by Russia in 2014, and parts of the eastern regions of Luhansk and Donetsk, which have been controlled by Russian-backed separatists since then.

Russian Deputy Prime Minister Marat Khusnullin said on Telegram that he visited Mariupol on Sunday, the country’s most senior government figure to set foot in the city after weeks of Russian bombing.

Khusnullin, responsible for construction and urban development, visited the commercial port and said it should serve to bring in building materials to restore the city, according to Russian Defense Ministry TV channel Zvezda.

Several Western officials, including US First Lady Jill Biden, Canadian Prime Minister Justin Trudeau, a head of the German parliament and Norway’s foreign minister arrived in Ukraine on Sunday in a show of support. A team of American diplomats also arrived in Kiev for the first time since the invasion.

Putin sent Victory Day messages to separatist leaders in Luhansk and Donetsk, saying Russia was fighting side by side with them and comparing their joint efforts to the war against Nazi Germany. “Victory will be ours,” Putin said, according to a Kremlin press release on Sunday.

Russia’s efforts were thwarted by logistical and equipment problems and high casualties in the face of fierce resistance.

Putin will on Monday preside over a parade in Moscow’s Red Square of troops, tanks, rockets and intercontinental ballistic missiles, delivering a speech that could offer clues about the future of the war.

Russians “have nothing to celebrate tomorrow,” US Ambassador to the United Nations Linda Thomas-Greenfield told CNN. “They failed to defeat the Ukrainians. They failed to divide the world or divide NATO.”