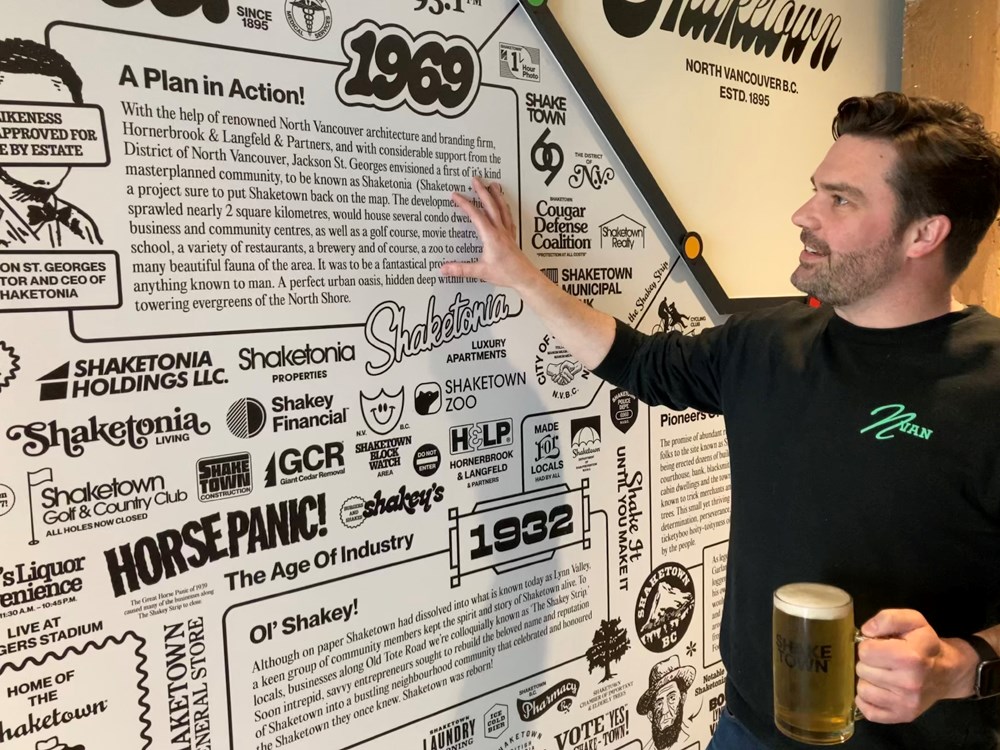 The stories are fake and the flavors are real in the newest addition to the North Van’s Brewery District. 🍺

When visiting the newly opened Shaketown Brewing Co. in North Vancouver’s burgeoning brewery district, you’ll want to bring a healthy appetite for draft beers and a healthy skepticism for the historical facts written on the walls.

The craft brewery opened to visitors in March after a long, slow dance with building regulations and COVID-19, and it has been a lively business ever since as people check out the latest addition to the thriving craft beer scene in New York. North Vancouver. Shaketown’s shopping space on East Esplanade — within a one-block radius of more than half a dozen other breweries, cider brewers, and distilleries — features an intriguing selection of craft beers, open, airy community seating, and a bank of opening windows. in a beautiful view of the sea.

The space also features a wall filled with fascinating facts and historical figures, all based on the existence of a long-forgotten area of ​​North Vancouver that was known as Shaketown due to the local economy, which revolved around turning cedars into shakes for siding or roofing. .

Shaketown was a real nickname for an actual location in North Vancouver – around where Lynn Valley Road meets Mountain Highway – but that’s where the historical truth of Shaketown Brewing ends and the stories begin.

Ryan Scholz, co-founder and driving force of the brewery, came across some historical references to Shaketown when he was brainstorming ideas for the brewery and fell in love with the name. He then hired a marketing firm to come up with some branding ideas, and they came back with an entire world of Shaketown complete with fascinating characters, tragic events – who can forget the Great Horse Panic of 1939! – and crazy entrepreneurs.

It was all wild, and all completely fabricated. And for Scholz, who wanted the brewery to have a fun sense of community, it was perfect.

“I was blown away,” he said. “We wanted to have one foot in reality and one foot in this kind of fantasy world. We just went for it.”

He had one small concern, however – there would be some backlash due to all the blatant BS they were spreading as historical data. To calm his mind, he contacted the staff at the North Vancouver Museum and Archives to make sure his plan was right.

“They laughed,” Scholz said. “They gave me their blessing, and the rest is kind of history.”

But what’s not untrue is that Shaketown is producing some pretty unique beers, thanks to the expertise of head brewer and co-founder David Varga, who partnered with Scholz and head of sales Rohan Karnick to get Shaketown off the ground. Scholz took Varga shortly after he quit his job at 33 Acres Brewing Co. from Vancouver, and Scholz said he couldn’t believe his good fortune in catching such a talent.

“He’s one of the best brewers in the province,” Scholz said.

Shaketown’s top beers list features its versions of industry standards such as wheat beer, IPA and pilsner, but offers some unique beers that add flavor and have a lower alcohol content than normal.

There’s a very vintage Golden Ale that tops out at four percent, an Itty Bitty IPA at 3.5 percent, and a Leichtbier that tops out at three percent. Varga said it’s these two “low gravity” beers, the Itty Bitty IPA and Leichtbier, that he’s most proud of because of the degree of difficulty involved in packing a lot of flavor into a low-alcohol beer.

“Everybody likes that Leichtbier,” he said. “They get weird… they see a 3% beer and they’re thinking Coors Light or Bud Light or something, and then they try it and you can almost see the cogs working in their heads.”

Those beers, particularly Leichtbier, have earned them some street credit in the craft beer world, Scholz added.

“It’s hard to make a beer that tastes good and is low in alcohol,” he said. “You can’t just throw a bunch of hops in there – it has to be the beer process that shines. … All beer geeks and nerds respect this beer because they know how hard it is to make. And that’s all in the process – we don’t put rice or corn in it, it’s just malt and the traditional beer ingredients.”

And speaking of beer aficionados, Scholz said he’s excited to find a commercial space in the heart of North Vancouver’s downtown brewery district, with other spots like Beere Brewing, House of Funk, La Cerveceria Astilleros and North Point Brewing just a few steps away. steps away.

Shaketown features an open-concept space with long communal tables, offering vibes that should be perfect for a world emerging from a pandemic, Scholz said.

“Our idea is to hang out with more friends than you came in,” he said. “That sense of community, I think that’s what the world is missing right now.” There are also plans in the works for a patio space overlooking the ocean, as well as indoor entertainment.

Shaketown Brewing Co. It is open from 2 pm to 9 pm Monday to Wednesday, from noon to 11 pm from Thursday to Saturday and from noon to 9 pm on Sundays. If you visit, remember to bring a grain of salt, not for the beer, but for what is written on the walls.