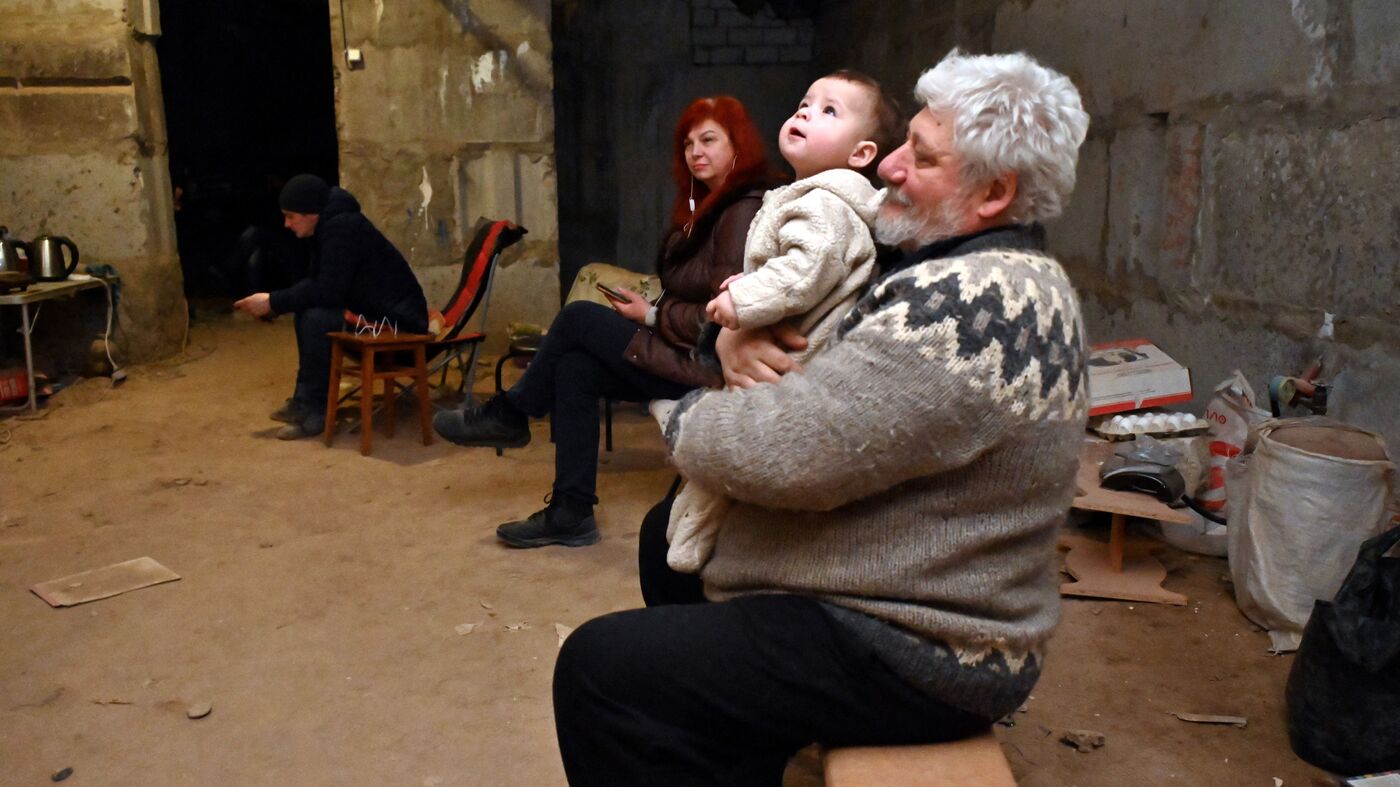 Ukrainians in the eastern city of Kharkiv take shelter in a basement on Sunday. The city, which is close to the Russian border, has been hard hit throughout the Russian invasion. Residents are bracing for a new Russian offensive in the eastern part of Ukraine.

Ukrainians in the eastern city of Kharkiv take shelter in a basement on Sunday. The city, which is close to the Russian border, has been hard hit throughout the Russian invasion. Residents are bracing for a new Russian offensive in the eastern part of Ukraine.

Ukraine’s military has fought so effectively that Russia has abandoned its Plan A, which envisioned a quick takeover of the capital Kyiv. Russia has now turned to Plan B, with troops focused on the eastern part of Ukraine.

So as the war enters a new phase, what does this mean for both sides?

The advantage of fighting at home

Ukraine has so far made the most of one key asset during times of war — the home-field advantage.

“You can see that the soldiers and the mercenaries on the Russian side are not particularly motivated, whereas the Ukrainians defending their homes are.”

An invading army like Russia has to pack everything it needs — weapons, fuel, food, medical supplies. And Russian troops have been sleeping outside for weeks during the rough Ukrainian winter.

As Russia regroups, it’s concentrating forces in eastern Ukraine, just across the border from Russia. That could improve its troubled supply lines.

But Kori Schake at the American Enterprise Institute believes “the Ukrainians will still have big advantages.”

The Russians are on the outskirts of several cities, where heavy fighting plays out daily. And the Russians were within 10 miles of the capital Kyiv during the early days of the war, which began on Feb. 24.

But they recently retreated from around the capital Kyiv, heading north into neighboring Belarus. Those troops are being resupplied, according to the Pentagon, and at least some are expected to travel across Belarus and Russia, and rejoin the fight in eastern Ukraine.

But just getting there poses some challenges, says Schake.

“The Ukrainians have interior lines of communication. They can move troops inside their own country,” she said. “The Russians have to go out and around [Ukraine]extending the mileage on tanks and everything else.”

Russia had no single commander in charge as it attacked Ukraine from the north, east and the south. US and European officials now say that Russia has put Gen. Aleksandr Dvornikov in overall command.

He was overseeing the southern sector of the war, which included Russia’s heavy bombing of the coastal city of Mariupol.

Dvornikov, 60, previously served as the commander of Russian forces in Syria, where they supported Syrian leader Bashar al-Assad. The Russian forces helped stabilize Assad in Syria’s civil war, but were also blamed for frequent attacks on hospitals and other civilian targets.

Analysts say a single commander in Ukraine might be able to provide better command and control over Russian forces, which so far have been plagued by poor planning, logistics problems and a tough Ukrainian defense.

A Ukrainian woman, Maria Korechko, touches the flag-draped casket of her son, Ukrainian soldier Andriy Zagornyakon, during his funeral on April 10, 2022 in Kamianka-Buzka, Ukraine.

A Ukrainian woman, Maria Korechko, touches the flag-draped casket of her son, Ukrainian soldier Andriy Zagornyakon, during his funeral on April 10, 2022 in Kamianka-Buzka, Ukraine.

In the first stage of the war, the Ukrainians were highly successful with ambush attacks, using small, mobile weapons, like Javelin and Stinger missiles supplied by the US These weapons are fired from the shoulder of a single soldier, and can take out a tank or a low-flying plane.

But the Ukrainians are pleading for heavy weapons, like tanks and big artillery guns, that could be critical in the fighting to come. They are getting some of what the want — but so far in small numbers.

The Czech Republic has sent a few tanks. Britain is chipping in with armored vehicles. Slovakia has sent an S-300 anti-aircraft system that can bring down high-flying Russian fighter jets.

But it’s nowhere near the scale of what Russia possessions.

“They just need everything,” said Lawrence Freedman, professor emeritus of war studies at King’s College London. “You know, wars are very greedy in using up material.”

“The Ukrainians talked about it being like a World War Two battle,” he said. “The two sides could be hammering away at each other with artillery.”

Yet he also notes that Russia’s military struggles so far could multiply as the fighting grinds on.

The Pentagon and European officials estimate that Russia has lost somewhere between 20 to 30 percent of the combat strength it felt into Ukraine.

A Ukrainian multiple-rocket launcher fires shells toward Russian troops, near Lugansk, in the Donbas region, on Sunday. The Russians say their forces are concentrating on the eastern part of Ukraine, and heavy fighting is expected in the area.

A Ukrainian multiple-rocket launcher fires shells toward Russian troops, near Lugansk, in the Donbas region, on Sunday. The Russians say their forces are concentrating on the eastern part of Ukraine, and heavy fighting is expected in the area.

A test of endurance for both sides

There are no signs the war will end quickly. Many military analysts are forecasting months of fighting. US Gen. Mark Milley, the chairman of the Joints Chiefs of Staff, testified to Congress last week that he expects the war to last years.

On the Ukrainian side, about a quarter of the population has been driven from their homes, many cities and towns have been badly battered, and the economy is in bad.

But the war has united Ukrainians, who’ve shown a strong will to fight, and no appetite for compromise, says Schake.

“The overwhelming majority of Ukrainians want Russia pushed out of their country, and that’s a powerful force preventing a negotiated Ukrainian settlement,” Schake said.

Russian leader Vladimir Putin didn’t get the quick and easy victory he expected, and now faces a protracted conflict as well as sweeping Western sanctions that are expected to shrink Russia’s economy by 10 percent or more this year.

Putin cut his losses and withdrew troops from northern Ukraine, opting to pursue scaled-back ambitions in the east, where pro-Russian forces have controlled territory in the Donbas region since 2014.

Putin still has the military resources to carry on the war indefinitely. And even if the war keeps going badly for Russia, Putin is likely to keep on fighting until he works his way through the “five stages of grief,” according to Gideon Rose.

“Denial, anger, bargaining, depression, acceptance,” Rose said. “What ultimately has to happen is Putin has to accept defeat and choose to walk away, choose to retrench. And that is something that is a psychological process, not just a strategic process.”

And that, he says, could take a long time.

Greg Myre is an NPR national security correspondent was based in Russia from 1996-99. follow him @gregmyre1.