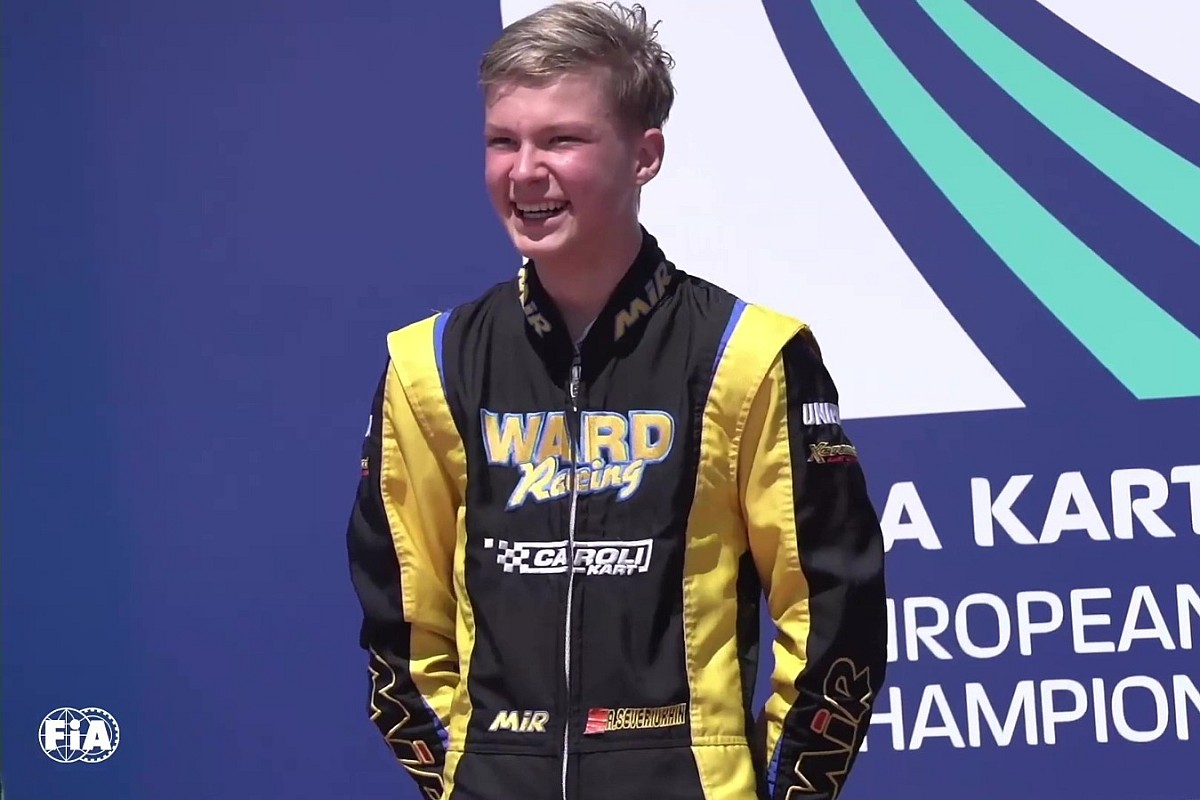 The youngster, who races under an Italian license because of the ban on his nation’s competing athletes, had triumphed in the final of the opening round of the FIA ​​Karting European Championship at Portimao in Portugal.

However, during the podium ceremony, when the Italian national anthem was playing, Severiukhin tapped his heart and appeared to give a Nazi salute as he laughed at onlookers.

Video of the incident has been circulating on social media and, amid the backdrop of Russia’s invasion of Ukraine, has prompted widespread criticism.

On Monday afternoon, the FIA ​​said it would get involved as it announced that a formal investigation had been launched.

In a statement posted on Twitter, the FIA ​​said: “The Federation Internationale de l’Automobile confirms that it has launched an immediate investigation into the unacceptable conduct of Mr Artem Severiukhin that occurred during the podium ceremony for the OK category at Round 1 of the 2022 FIA Karting European Championship at the Kartodromo Internacional do Algarve in Portugal.

“The FIA ​​will communicate shortly on the further steps that will be taken in this case.”

Severiukhin himself has denied, however, that he gave a Nazi salute and instead said he was simply celebrating with his friends and family, who were standing opposite the podium.

“I would like to address everyone about yesterday’s situation on the podium,” he was quoted as saying by a Russian automobile federation spokesperson. “I won the round of the European Championship and was very happy.

Severiukhin’s karting team, Ward Racing, has taken immediate action in response to his actions, and plans to terminate his contract.

In a statement posted on Instagram, it made clear it was outraged by what the youngster had done.

It said: “Ward Racing…condemns the personal actions of pilot Artem Severiukhin during the award ceremony on April 10, 2022 in the strongest possible terms, as it considers them a manifestation of unsportsmanlike behavior, an unacceptable violation of the ethical and moral sports codex.

“With this statement, Ward Racing expressed its opinion, as well as the opinion of all athletes and staff of the Ward Racing team.

“On the basis of these considerations, Ward Racing sees no possibility for continued cooperation with Artem Severiukhin and will proceed with terminating his racing contract.”

The Russian Automobile Federation said it was also looking into the matter, as it wanted to examine the details of what happened.

“The Russian Automobile Federation is clarifying the circumstances of the incident and the athlete’s act, and is also analyzing the comments of the parties in connection with this,” it said in a statement.

“The Russian Automobile Federation informs that Artem Severiukhin was released from the RAF and competed in the European Championship under an Italian license, which is why Artem has the Italian flag on the protocol and the Italian anthem sounded on the podium.

“We also report that we consider it unacceptable any, even an accidental, manifestation of fascism and Nazism in Russian motorsport and among Russian athletes.”

Severiukhin is not the first Russian athlete to cause controversy at a sporting event since the war with Ukraine started.

Last month, athlete Ivan Kuliak wore a ‘Z’ logo, which has become a symbol of Russia’s war efforts, during the medal ceremony at the gymnastics World Cup in Doha.

His actions are subject to an investigation by the International Gymnastics Federation and he could face a ban from competition.