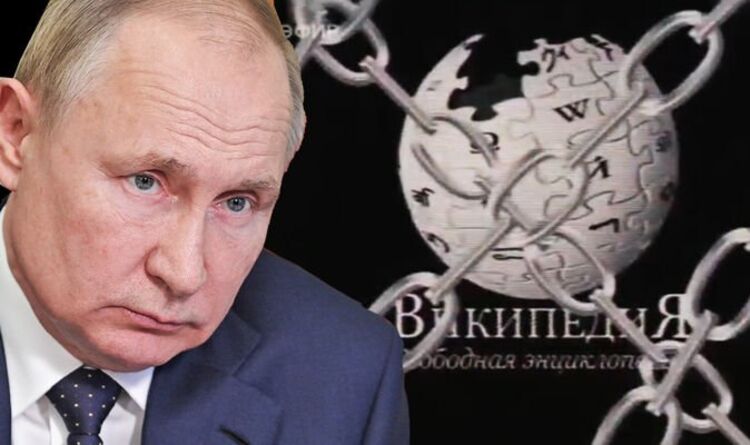 The Russian propaganda war has been ramping up in recent weeks, with the message shifting from the invasion of Ukraine being a “special military operation” to pundits expressing the need not only to “de-Nazify” the country but to pursue “de-Ukrainianization” ”. Meanwhile, attempts to criticize the war both at home and abroad have been kept out of the narrative or played down as “fakes”.

One of the country’s largest state-backed media outlets has launched an attack on the online encyclopedia Wikipedia.

In a feature broadcast by Channel One Russia, dramatic music is played while the website’s logo is presented behind bars.

The narrator, translated by Francis Scarr, describes it in no uncertain terms as a “hotbed of fakes”.

Mr Scarr reported in a post on Twitter: “Russian state TV is now doing hatchet jobs on Wikipedia. This one takes aim at the site’s ‘false’ articles on Russia’s war crimes.

“It says Wikipedia is now a ‘hotbed of fakes and disinformation’ and has become a ‘Russophobic site’.”

Wikipedia features pages including one titled “War crimes in the 2022 Russian invasion of Ukraine”, which features the suggestion “Russian authorities were accused of carrying out wartime actions, including… possibly crimes against humanity”.

He wrote in a post on Twitter: “Wikipedia’s role as reference point for so many public discussions have made it a battleground for disinformation edit wars.

READ MORE: UK and US have ‘big opportunity’ to isolate Russia and take major ally

Another pundit, Nikita Danyuk, exclaimed that in the West, “if you dare so much as express an alternative point of view [on the war]you already face prosecution”.

Mr Scarr highlighted that in Russia, those who “spread false information” about the war face up to 15 years in jail.

This armed threatened punishment was announced after Duma Chairman Vyacheslav Volodin described the “very tough” response that would be issued to any Russian who “makes statements which discredit our forces”.

Another key tool of the Russian propaganda agenda is repetition, which BBC Russia Editor Steve Rosenberg reports has been used on state television to portray the message the war in Ukraine is just.

He highlighted the continued appearance of the phrase “our cause is just” on Channel One’s primary news program last night, on Sunday.

This has been spotted alongside the words “army of liberation” which have also been highlighted on set for millions to see.