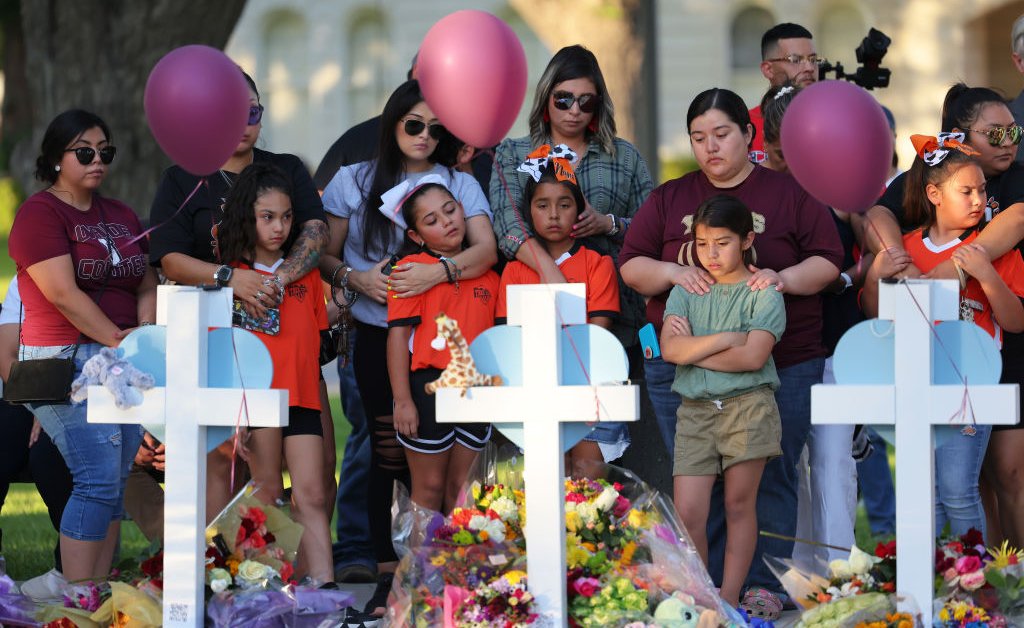 IIn Town Square in Uvalde, Texas, 21 crosses are lined up, each with the name of someone killed by the gunman who broke into Robb Elementary School on May 24. They are about two feet tall, with baby blue heart-shaped plates glued to the top. Sharpie pens are attached to each of them on a string, so community members can write messages of condolence and love.

“I will always love you my beautiful granddaughter” is written on the memorial of Layla Salazar, a 10-year-old girl victim of the shooting. It’s signed “Grandma”.

If the scene is heartbreaking, for some Latino Texans it also feels tragically familiar. It’s reminiscent of the homemade crosses with names that people flocked to in El Paso, Texas after a gunman killed 23 people at a Walmart on August 10, 2019 in the deadliest attack on Latinos in recent US history.

After that shooting, people in Uvalde gathered in prayer groups for El Paso, says Sue Rankin, a seven-year Uvalde resident who participated in a prayer three years ago. Now, people in nearby communities are praying for Uvalde. “We never thought this would happen here,” says Rankin. “I see so many people coming together.”

While so far there has been no indication that the gunman’s actions were racially motivated, the majority of victims in the Uvalde shooting were Latino. Nearly 90% of students attending Robb Elementary School are Latino, according to data from the Uvalde Consolidated Independent School District. Nationally, more than 4,100 Latinos die each year from gun violence, are twice as likely to die from firearm homicide in the U.S. as whites, and are four times more likely to be injured by a gun than whites, according to Everytown For Gun Safety, a nonprofit that advocates tighter gun control measures and researches gun violence. (The impact of gun violence on Latinos is second only to the amount of gun violence inflicted on blacks in America.)

Despite the massacre in El Paso, other mass shootings in the state in recent years and the grim statistics, several members of the Uvalde community say their small town has always been a safe haven. But Tuesday’s violence is forcing a reckoning among some Uvalde residents over Texas’ gun laws, which are some of the most lax in the country.

“Canada doesn’t have school shootings, the UK hasn’t had a shooting since it enacted gun control laws… and there were red flags going up all over the place for that. [shooter],” says Robert Dennis, who was born and raised in Uvalde and says he has always supported gun ownership. “My ideas about gun ownership are changing.” Dennis went downtown to write “You will be missed” on each of the 21 memorials on Thursday morning.

Uvalde is a quiet community, says resident Sofia Aguilar, with relatively little gun violence despite the city’s widespread hunting culture and the popularity of guns. Aguilar says she supports stricter gun control measures. “I’m very upset,” she says. “People are buying guns to hurt other people.” Aguilar knew one of the victims, 10-year-old Jacklyn Cazares. She cried when she found Jacklyn’s cross in Town Square.

See More information: These are the victims of the school shooting in Uvalde, Texas

Uvalde County Commissioner Ronald “Ronnie” Garza, who attended Robb Elementary as a child, says he was also shocked that violence of this nature would occur in Uvalde. “Like any small town, we will have an incident here or there, but this is just tragic,” says Garza. He is urging Texas officials to support stricter gun control measures such as background checks and age limits. “The current system is not working,” he says. “Something has to be done. We cannot accept the status quo.”