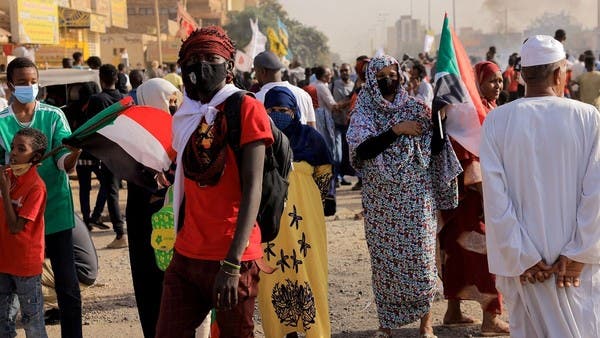 Sudanese security forces fired tear gas at crowds that gathered in Khartoum on Saturday to protest the military regime and mark the third anniversary of the deaths of dozens of protesters.

Crowds blocked a major road junction in the capital and distributed food to break the Ramadan fast. But just before sunset, police began to disperse the demonstration and chased protesters through side streets, a Reuters reporter said.

Posts on social media said people also gathered in the towns of Madani, Kosti and El Obeid, carrying placards with faces of some of the youths killed in 2019.

“We will continue on the path that the martyrs started,” said one of the protesters in Khartoum on Saturday, who declined to be named.

Protests and unrest have continued to rock Sudan since months of mass demonstrations that culminated in the overthrow of former President Omar al-Bashir in April 2019.

On June 3 of that year, gunmen accused pro-democracy protesters who were holding a protest outside military headquarters in the center of the capital, demanding that the army hand over power to civilians following Bashir’s ouster.

Activist doctors said nearly 130 people were killed in that attack and the violence that followed. Official accounts put the death count at 87.

The military later agreed to share power with civilians, but seized power again in a coup in October 2021.

Sudanese police could not be reached for comment on Saturday, the third anniversary of the attack according to the Islamic lunar calendar.

The Khartoum state security committee called on Friday for the protests to remain peaceful and blocked the center of Khartoum.

Military leaders have denied responsibility for the 2019 killings. Several other junior officers are on trial in the killings.

EU and US urge Sudan to switch to civilian government

Former Sudanese official Suleiman says he was released from detention