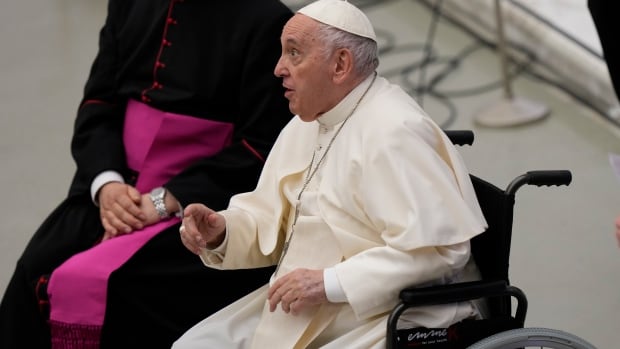 Pope Francis has canceled his participation in an annual mass and procession next weekend due to knee pain, the Vatican said on Monday.

The annual Corpus Domini procession, scheduled for Sunday, is a century-old profession of the Catholic faith during which the Eucharist is publicly displayed.

Francis has canceled several events this year due to strained ligaments in his right knee that made walking and standing difficult. He has been using a wheelchair for more than a month and the Vatican announced last week that he had to cancel his planned July 2-7 trip to Africa so as not to jeopardize his recovery.

On Sunday, Francis apologized to governments and worshipers in Congo and South Sudan, saying he was upset at having to postpone the visit and that the trip really meant a lot to him.

“I apologize to you,” he said, asking for prayers, “so that, with God’s help and medical treatment, I can get to you as soon as possible.”

The Vatican did not specify the exact nature of the problem or what treatments Francis is receiving, but he said he has had some injections and friends say he is doing physical therapy daily.

Francis is scheduled to visit Canada July 24-29 on a trip that will include stops in Edmonton, Quebec City and Iqaluit.

After the Pope canceled his planned trip to Congo and South Sudan, the Canadian Conference of Catholic Bishops said it was in regular contact with the Vatican about the upcoming trip to Canada and that it was seeking “to ensure that your participation in events is a limited amount of time” of about an hour per event when he is here.

Francis announced his plan to visit Canada during an April 1 meeting with delegates from the First Nations, Inuit and Métis, who traveled to the Vatican to meet him. At the time, he also offered an initial apology for the “deplorable conduct” of some individual members of the Roman Catholic Church in Canada’s residential schools in the late 19th century and subsequent decades.