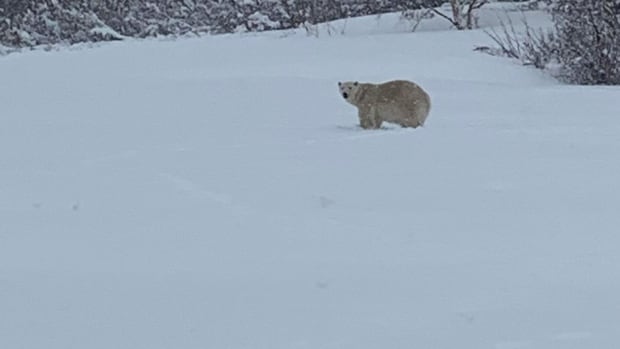 Quebec Provincial Police are warning residents of a polar bear sighting in the Madeleine-Centre, Que. area on the north coast of the Gaspé Peninsula.

The mayor of Sainte-Madeleine-de-la-Rivière-Madeleine said he was alerted to the situation on Saturday morning after a friend of his sent him pictures of the bear and one of its footprints.

“It was a funny day. I was wondering how a polar bear could get there, it’s a little early for an April Fools joke,” Joël Côté said while speaking to Radio-Canada.

The animal was last seen near the site of the former airport in the area, Sûreté du Québec (SQ) said.

Sophie Bonneville told Radio-Canada she saw the bear near her home after her dog Boris alerted her. Quebec wildlife officials were contacted shortly thereafter.

“My partner was digging and Boris ran away because, well, he doesn’t represent anything in our land, not even a crow,” Bonneville said. “He looked at the dog, he wasn’t scared.

“After looking at my partner, he turned to head back to the forest.”

They have yet to confirm that it is indeed a polar bear and are continuing to look for tracks to determine where it has gone.

“There’s a photo where you can clearly see the bear, and it’s white. In terms of color, it’s the right color,” added Côté. “I’m not an expert.”

Officials with the SQ are going door-to-door advising area residents to stay indoors.

Police are asking anyone who sees the animal to stay away from it and call 911 immediately.

A rare but not impossible visit, says biologist

Polar bears found in spring on the east coast of Labrador move north when the ice breaks, Berteaux said, but noted that sometimes the bears can get lost. They are also fantastic swimmers, he said.

“The Inuit consider it a marine mammal,” Berteaux said. “According to the scientific literature, there is nothing exceptional about a bear swimming 100 or 200 kilometers.”

Earlier this month, polar bears were seen more than 200 km to the north, across the Gulf of São Lourenço, in the area of Baie-Johan-Beetz. A polar bear was also recently spotted near the Innu community of Unamen Shipu on the Lower North Shore, which is already south of the animal’s normal habitat.