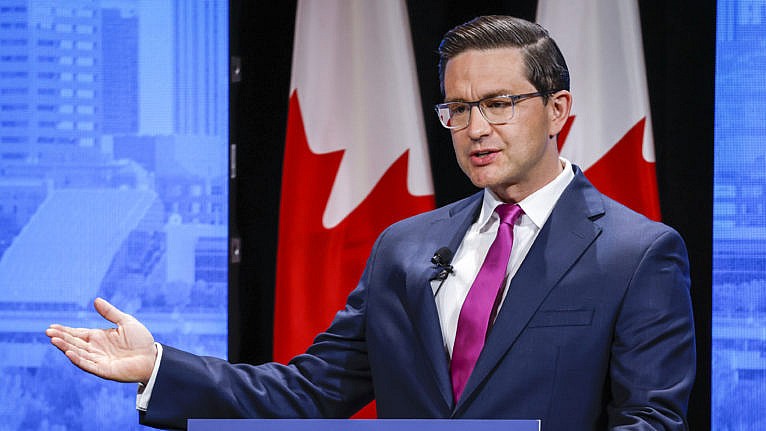 Insider Policy for May 12: A Summary of the CCP Debate; a liberal Ontario candidate is fired for homophobic remarks

Welcome to a preview of the Maclean’s Politics Insider newsletter. Sign up to have it delivered straight to your inbox in the morning.

In his opening statement at the CCP leadership debate in Edmonton on Wednesday night, Pierre Poilievre said he would fire the governor of the Bank of Canada Tiff Macklem if he forms government, the Globe reports: “The Governor of the Bank of Canada allowed himself to become this government’s ATM and then I would replace him with a new governor who would reinstate our low-inflation mandate, protect the purchasing power of our dollar, and honor the workers who are in these jobs.” Per Globe:

Central bank independence is a widely accepted convention because controlling inflation and maintaining the dollar’s purchasing power sometimes requires unpopular decisions that politicians may want to avoid. This includes raising interest rates to slow the economy when inflation is very high.

Strategy: At the beginning of the day, the researcher Nik Nanos told CTV that Poilievre was attacking the bank to position himself as “the anti-establishment candidate.”

Nanos said Poilievre is effectively targeting the portion of the electorate who perceive the system as broken and in need of overhaul. “And I think that’s why we’re seeing Pierre Poilievre make an all-out frontal assault on the Bank of Canada. And you know what? Expect more, because this is his central positioning, him as the anti-establishment outsider, there as the agent of change and then the other candidates as the establishment.”

Womp womp: The debate was “softer, but occasionally circus-sounding”, the Publish reports.

The Wednesday night event was held in Edmonton, Alta., and moderated by veteran former political journalist Tom Clark. Some of the topics covered in the debate were: the future of the Party, the future of energy, Northern Canada, environment and climate change, cost of living and law and order. Despite the occasionally irritating exchanges, notably between Charest, Poilievre and Lewis, the moderator also occasionally stole the show, notably using a sad “womp womp” trombone sound whenever a candidate broke any of his numerous rules or asked candidates personal questions. that had little to nothing to do with current affairs.

Round up: CTV has a good summary of some of the highlights.

Diesel fumes: Inside Political, Philippe J. Fournier has an interesting analysis of the leadership race, written ahead of Wednesday’s debate, analyzing a recent EKOS poll on attitudes towards the convoy protests, which finds that 46% of CCP supporters looked favorably on the convoy, versus just 30% who objected. .

Slave Auction: Ontario MPP PC Stephen Lecce apologized on Wednesday for having participated in a “slave auction” when he was a university student, the Star reports. Lecce, the education minister, participated in the fraternity’s fundraiser while attending Western University 16 years ago.

Shoot: Ontario Liberals fired a second candidate within two days of the Star revealed that the party’s longtime candidate in Parry Sound-Muskoka claimed that homosexuality is caused by children who “breathe” their own air.

Expect delays: Canadians traveling on Pearson are facing long wait times and the situation is likely to get worse in the coming weeks, reports Bloomberg. The airport is being hit by a double whammy of staff shortages and longer processing times due to COVID-19 screening.

Who is to blame? Omar Alghabra said on Wednesday that CATSA staff are at 90% of pre-pandemic levels, while flight volumes are still below 70%, so staff cannot be the main problem, CP reports. He said out-of-practice travelers are causing delays.

Mandate question: At the Globedoctor Zain Chagla writes that it is time to reconsider vaccine mandates for Canadians boarding commercial planes or trains.

Abortion support: A majority of Canadians support the right to abortion, according to an online survey by Leger and the Association for Canadian Studies. Globe reports. About four in five respondents said they were in favor of a woman’s right to have an abortion, if she chooses, while 14% said they were against it.

“There were people who were saying really horrible things. Some people were saying ‘I hope you die’ and things like that,” he told a news conference when asked about the incident. “We should be able to respectfully disagree as a society, maybe even angrily, but it doesn’t have to get to the point where it gets so polarized that people’s safety is at risk.”

Safety: Concern over yahoos anti-vax prompted the Saskatchewan legislature to introduce a bill to improve security there, according to CP.

It’s not their question: Brenda Lucki told lawmakers that the Emergencies Act gave the RCMP and other officers the tools to quell the Freedom Convoy protests, but said her force did not ask for the act to be invoked, which Publish reports: “We were the ones using these authorities, so we were consulted to see if they would be of any use to the police.”

Poland planes: Ottawa will soon organize three charter flights to bring those fleeing the war to Canada, the CBC reports. A government official, speaking off the record, said the planes will take off from Warsaw and head to Winnipeg (May 23), Montreal (May 29) and Halifax (June 2). About 900 Ukrainians, 300 people per flight, will be able to fly to Canada, according to estimates provided to Radio-Canada.

The prayer is: Deputies voted Wednesday to defeat a bloc motion to replace the prayer that starts the day in the House, global reports. The Bloc Quebecois and most NDP MPs voted on Wednesday in support of the motion to replace the opening daily prayer, with the exception of NDP MPs Charlie Angus and Daniel Blaikie. Conservatives and liberals opposed the motion, except for Nathaniel Erskine-Smith.

Growing cyberspace: The Canadian government has guided its military to adopt a more “assertive” posture in cyberspace, reports Global. A “cyber handbook” provided to Anita Anand earlier this year noted that the threats facing Canada’s networks have “evolved significantly” since the government launched its 2010 cyber strategy.

get the best of Macleanis sent directly to your inbox. Sign up for news, comments and analysis.