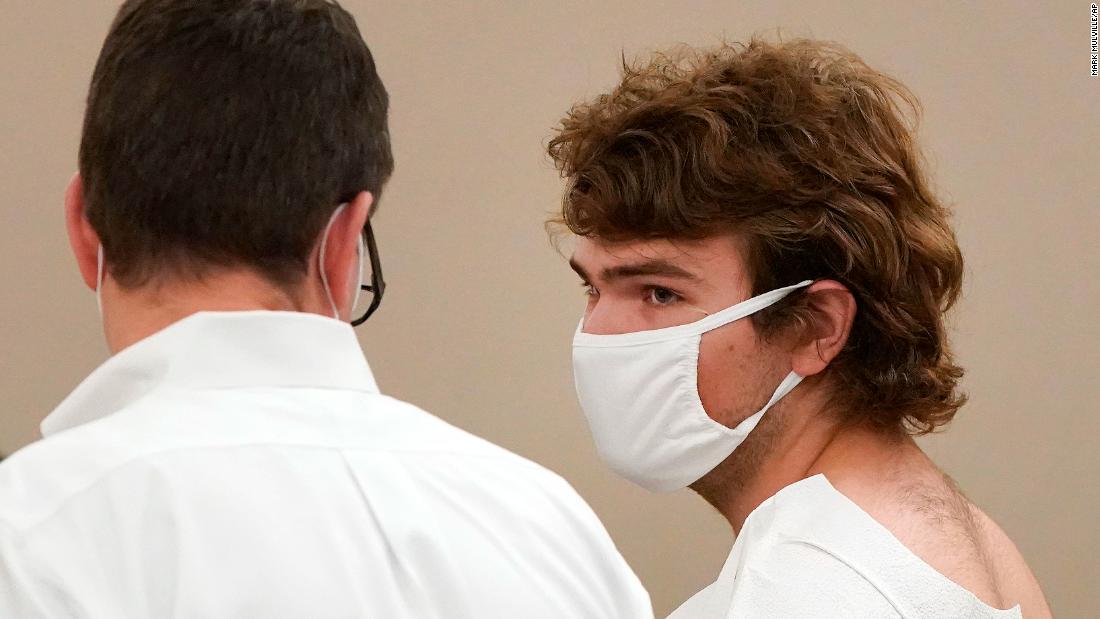 Tops Friendly Market, where the shooting took place, is located in the heart of Buffalo’s black community and 11 of the 13 people shot by the white suspect were black, officials said.

“That was pure evil,” Erie County Sheriff John C. Garcia told a news conference Saturday, calling the shooting a “racially motivated hate crime by someone outside our community.”

The US Department of Justice is investigating the shooting “as a hate crime and racially motivated act of violent extremism,” according to a statement from US Attorney General Merrick Garland.

Payton Gendron, of Conklin, New York, was charged with first-degree murder on Saturday, Erie County District Attorney John J. Flynn said in a press release. Conklin is about a three-and-a-half-hour drive from Buffalo.

He pleaded not guilty.

Here’s what we know about the shooting suspect.

He was wearing tactical gear

Authorities say that when the suspect arrived at the store around 2:30 pm, he was heavily armed, wearing tactical gear, a helmet and had a camera that broadcast his actions live.

The suspect used an assault weapon, Flynn said during the press conference.

In his press release, Flynn said the suspect shot four people outside the supermarket, three fatally. When he entered the store, he exchanged fire with an armed security guard, who authorities said was a retired Buffalo police officer. The security guard died from his injuries. The suspect shot eight more people at the store, six of whom died, the statement said.

He allegedly streamed live on Twitch

Popular live streaming platform Twitch confirmed Saturday that the shooting suspect used its platform to broadcast a live stream during the attack.

The company said it was “devastated” to learn of the shooting and added that the user “has been suspended indefinitely from our service and we are taking all appropriate steps, including monitoring any accounts that relay such content.”

CNN obtained a portion of the live stream that shows the alleged shooter arriving at a Tops store.

The video is recorded from the alleged shooter’s point of view as he enters the supermarket parking lot. The person is seen in the rearview mirror wearing a helmet and is heard saying, “I just have to go ahead”, before stopping in front of the store.

In the video, shoppers can be seen walking through the parking lot as the suspect arrives.

A Twitch spokesperson said the company removed the live stream less than two minutes after the violence began. The company did not immediately respond to follow-up questions about whether the suspect was actively shooting when the live stream was interrupted.

Investigators were on Saturday reviewing an alleged 180-page manifesto that was posted online in connection with the investigation into the shooting, two federal law enforcement sources told CNN.

The manifesto, independently obtained by CNN shortly after the attack and before authorities released the suspect’s name, is allegedly written by a person claiming to be Payton Gendron confessing to the attack.

The manifesto’s author says he bought ammunition for some time but didn’t get serious about planning the attack until January. The author also talks about his perceptions of the decrease in the size of the white population and claims of ethnic and cultural replacement of whites.

A part of the document is written in the form of questions and answers.

The author of the manifesto attributes most of his beliefs to the internet and describes himself as fascist, white supremacist and anti-Semitic.

He will likely face more accusations

He pleaded not guilty, Hannah told CNN. If convicted, he faces a maximum sentence of life in prison without parole, the statement said.

And there could be more accusations coming, officials said.

“My office is working closely with the US Attorney’s Office and our law enforcement partners on potential terrorism and hate crimes. This is an active investigation and additional charges may be filed,” Flynn said in a statement.

Gendron is expected to return to court on the morning of May 19 for a criminal hearing, the statement said. He will remain in custody without bail, he added.