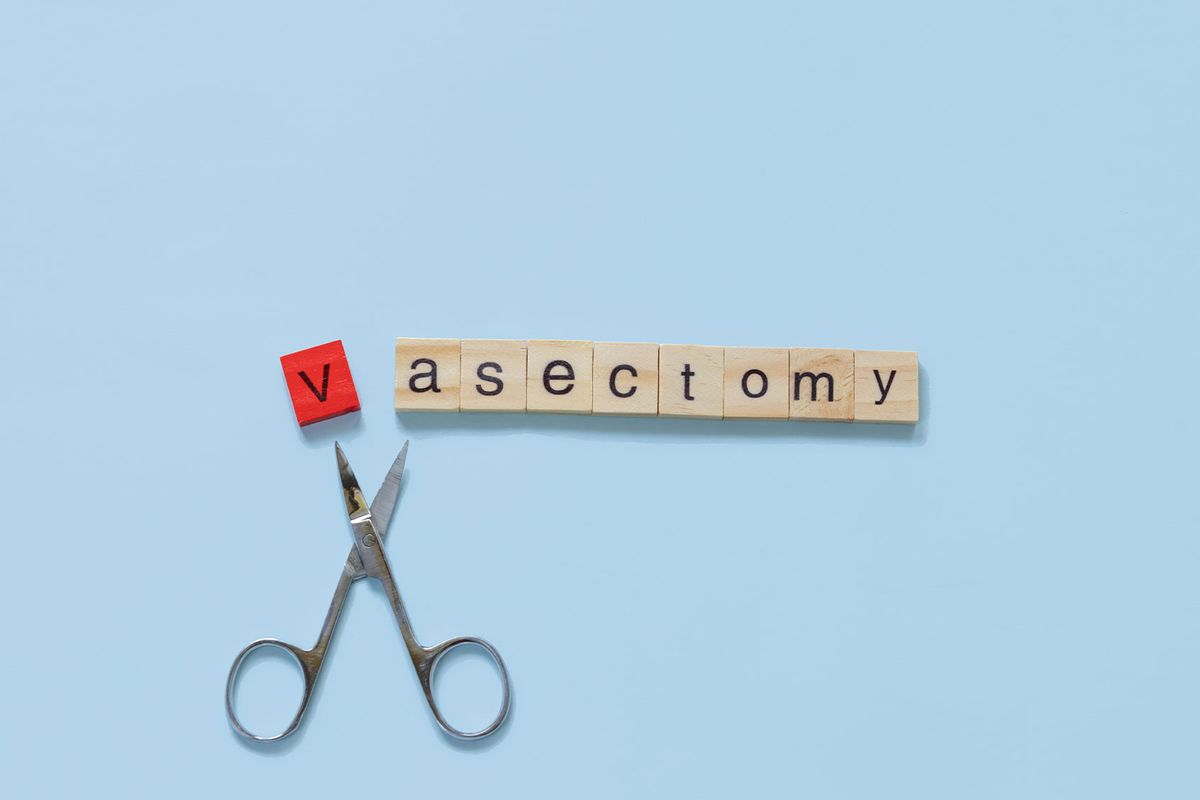 There are two small bumps at the base of my penis. They correspond to the two punctures made during my recent no-scalpel vasectomy, one approximately twice the size of the other.

“Which one is bigger?” the doctor asks me over the phone.

“That would be your right… or, mine right?” he asks. Then he specifies, “I mean, like, if I were examining you.”

“Calm down right,” I say, expecting a laugh. After a moment of silence, I clarify: “My right.”

In case you didn’t know, a vasectomy is when a doctor (hopefully a doctor) cuts your vas deferens — or spermatic ducts — and seals them, cutting off the sperm’s path to your penis, making it sterile.

It’s a great way to avoid having too many children. And when I say that, I mean there is a fair amount of swelling after the procedure.

My doctor suggests that the bumps could be sperm granulomas, which can form when sperm starts to leak from the cut end of the vas deferens.

In other words… my sperm just couldn’t get in.

(When I told my doctor this, he didn’t laugh. He just started listing the anti-inflammatory drugs I could take.)

Vasectomies are, appropriately enough, a lot like fatherhood. In addition very general comments, the men who have passed them are tight-lipped about what to expect.

You are in and out.

Then you can sit with frozen peas in your crotch.

Vasectomies are, appropriately enough, a lot like fatherhood. In addition very general comments, the men who have passed them are tight-lipped about what to expect.

If you get a vasectomy in March, you’re supposed to spend the next few days watching college basketball.

Now, I don’t know if you got my “right on stage” joke before, but if you did, you can probably infer that I do. noactually spend my recovery watching college basketball. But that’s not important.

Let’s take a few steps back.

In 2006, I was working part-time at a library in Metro Detroit. The specific library where I worked was the center of a network of local libraries.

One of my daily duties was to unload a truckload of books—mostly novels by Danielle Steel—that would be forwarded to the people who put them on hold. Books were packed in large canvas bags that sometimes weighed up to 50 pounds. My co-worker Brian and I tossed them like kettlebells while listening to nu-metal.

One afternoon on the way home from a typical shift, I felt something… odd … in my shorts. It was just below where my belt hit – an area where you really don’t want to feel anything that could be described as “weird”.

When I got home, I took a look. There was a nasty red bump the size of a quarter north of my genitals. It looked solid.

a herniaI thought, although I wasn’t quite sure what a hernia was other than a big lump that pops up when you lift things incorrectly, like I used to do at the time. A Google image search seemed to confirm my suspicions.

“I have a hernia,” I announced to what, in retrospect, turned out to be a stupid number of people.

My boss, God bless her, could best be described as “bothered.” She explained, frowning, that if I couldn’t quickly get back to carrying 50-pound canvas bags of books, some sweet 60-year-old librarian might have to step in. And that wouldn’t be good for anyone, would it?

Don’t worry, I told her, I had already made an urgent appointment to examine my inconvenient hernia and determine next steps.

Days later, with my pants around my ankles, a kind nurse explained—with a slight smirk—that the red bump in my crotch wasn’t a bulging piece of herniated intestine, but an ingrown hair. Fairly common. It would probably go away on its own.

RELATED: My Friend Asked Me to Shave His Butts

He did. And I spent the next week buying lies about why I was suddenly okay and walking around with books like it was no big deal and let’s forget what I said, okay?

My dad had a vasectomy in the mid-80s, which I can only assume was done in a smoke-filled room with a razor blade dusty with cocaine.

I say this because up until the day of my vasectomy, it was the most traumatic experience I have had around that general area of ​​my body. (We’ll go ahead and take my teens off the record here.)

Then V-Day came along and kicked things off of several notches.

If you are considering having a vasectomy, we should stop here and note that it is a perfectly normal and reasonable thing to do. The American Urological Association estimates that about 500,000 men in the US have vasectomies each year. And I’d bet none of them complain about every little inconvenience as much as I do.

Which is to say, don’t let me—a stranger who passed out twice while donating blood—convince you not to get the old cut.

My dad had a vasectomy in the mid-80s, which I can only assume was done in a smoke-filled room with a razor blade dusty with cocaine. When I asked him what to expect, he made it seem as routine and boring as a dentist appointment. “It was just me and the doctor,” he said. “It took half an hour.”

It was a totally different situation for me, I told him after my procedure.

For starters, while my vasectomy was in fact performed by a lone doctor, there were also nearly half a dozen supporting characters in the room—nurses and technicians, I suppose, though I never thought to ask. Which is funny, because 30 seconds after entering the aforementioned room, I was on my back with my (previously) private bits on display.

I said something weird to address my vulnerable position. The doctor said, “Yes, sorry, this procedure leaves little room for modesty,” as he spread ice-cold chlorhexidine on my scrotum. I wanted to say more, but, perhaps for the first time in my life, I didn’t. Having your genitals open to a room full of strangers will make you do crazy things.

Then one of the other doctors piled a heavy blanket on my torso. This sent an immediate signal to my brain that we were stuck. She asked if I would like another blanket and I said “No thanks” as I silently sank into a panic attack.

Having your genitals open to a room full of strangers will make you do crazy things.

I didn’t tell anyone the panic attack was happening, of course, but they understood as soon as I started pulling up the heavy blanket and spouting nonsense about how hot it was getting in the 60 degree operating room. “Calm down baby,” someone said as they put some alcohol swab under my nose.

The doctor continued his work, coldly asking what kind of music I like. “Jazz,” I replied, but my tongue was numb from the panic attack, so it sounded like “jath.”

“Oh, excellent,” he said. “I know exactly what you’re going to like.” Then he asked for an artist I’d never heard of, but I can only assume it’s the Vanilla Ice of jazz. After about a minute he asked what I thought and I responded with a question of mine: “Can we accept something elth?”

I suggested Dave Brubeck or Miles Davis. Even in the midst of the panic attack – which was showing signs of abating, perhaps thanks to the horrible smooth jazz? — I wondered if the people in the room thought I was just trying to look cool.

“You have to slow your breathing,” someone said. “Why don’t you try breathing along with the next song?” Just then, Miles Davis’ fastest and most unpredictable live cut began to play. It looked like a cat running on a slippery counter. I wanted to laugh, but I suddenly felt the uncomfortable sensation of my sperm duct leaving my body. It was like a piece of dental floss slipping between my teeth.

“Ohhh man,” I said dizzily. More alcohol-soaked cotton balls were piled on my upper lip. A wet cloth was placed on my forehead. Recognizing me as a nearly 30-year-old nerd, the doctor began to summarize an article he had read about Batman’s psychology. It all worked together to keep me conscious as my brain cycled through images of bloodstained bags and red stained sheets.

About 30 minutes later, my body seemed to accept its fate. My heart slowed to a normal rhythm and I managed to regulate my breathing. My doctor, laughing as he applied two common band-aids – yes, that’s all – said, “OK, that was just practice. Let’s do it for real this time.” A nurse (or technician) told him, “Stop it.” I laughed, probably really hard, out of sheer relief.

The doctor left, and after a few peaceful moments, someone helped me put on a pair of medical-grade supportive clothing – i.e. a jockstrap. I was then taken to a different room and asked to sign some documents indicating that I knew there was a small chance that I would not to be sterile. “Sometimes the procedure doesn’t work,” the post-op nurse said. “But if that happens, it’s super easy to go in and do the procedure again.”

My eyelid twitched as I shook my head and smiled, trying to convey the human emotion of coming to terms with something horrible you’ve just heard. They gave me cranberry juice for the road.

An hour later, I settled on the couch with a bag of frozen pumpkin in my pants.

We were out of peas.