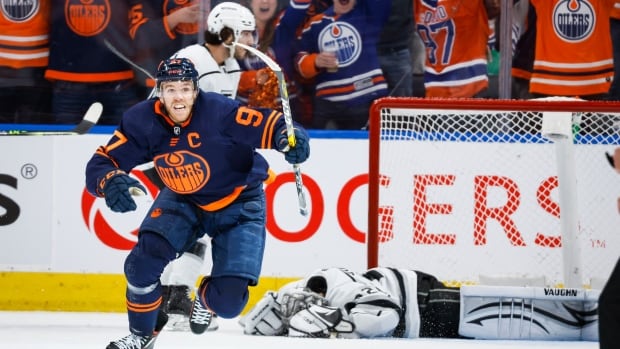 Connor McDavid had a goal and an assist as the Edmonton Oilers advanced to the second round of the Stanley Cup playoffs with a 2-0 Game 7 win over the visiting Los Angeles Kings on Saturday.

Cody Ceci also scored and Mike Smith made 28 saves for his second playoff loss to the Oilers, who last won Game 7 in 1998 and celebrated their first playoff series win since 2017.

Jonathan Quick made 39 saves in a losing effort for the Kings, who have not won a playoff series since winning their second Stanley Cup in 2014, also the last year they won a series in a Game 7.

There was no scoring in a tense opening period, with the Oilers putting 10 shots on Jonathan Quick while the Kings sent seven to Edmonton’s starter Mike Smith. Quick entered the game with a 4-0 career record in Game 7s.

Edmonton came close to scoring midway through the second half when a puck was heading over the goal line in a scramble, but was saved in time by Kings forward Andreas Athanasiou.

The Oilers finally opened the scoring with 6:45 remaining in the second period when McDavid threw a pass from behind the net to Ceci, who landed a shot over Quick’s shoulder.

Edmonton closes Los Angeles in game seven after goals from Cody Ceci and Connor McDavid, they defeat the Kings 2-0 advancing to the second round of the Stanley Cup Playoffs.

Edmonton came close to extending his lead a few times early in the third when Josh Archibald narrowly missed putting a puck into Quick’s legs and Kailer Yamamoto hit a post with most of the net wide open to kick.

The Oilers finally got some insurance with 3:53 left in the third on a great individual shot by McDavid, who drove behind the net before sending his second backhand attempt for his fourth goal and 14th point of the league playoff. McDavid had several one-off efforts in six of the series’ seven games.

The Oilers now advance to face the winner of the Calgary Flames/Dallas Stars series – which will be decided in Game 7 on Sunday.