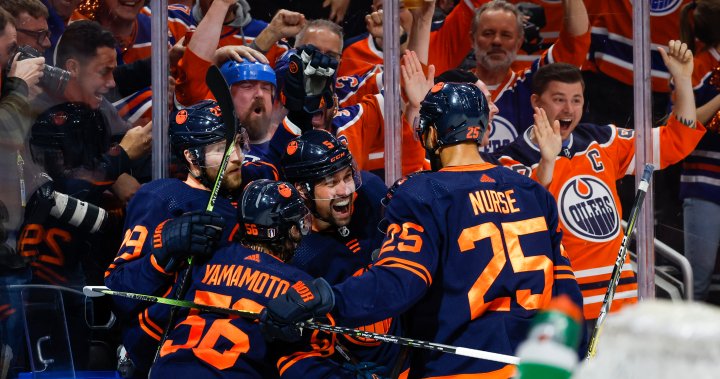 The Edmonton Oilers head into the second round of the Stanley Cup playoffs after a 2-0 win over the LA Kings Saturday night at Rogers Place. The Oilers won the series 4-3.

“It feels good to win a playoff round. It’s just the second I’m a part of,” said Oilers captain Connor McDavid. “It’s definitely a special feeling.”

“It’s good to do that with this group,” added Draisaitl after the win. “We’ve been through things all season – for many years, even – a lot of ups and downs and a lot of negative things, so it’s great to have that feeling now.”

With the crowd in a frenzy, the Oilers got the better of it early on as the Kings took eight minutes to register a shot on goal.

“It’s a dream come true,” Oilers coach Jay Woodcroft said of training in front of the Rogers Place crowd on Saturday. “Obviously the city of Edmonton is after us.

“The rink was electric today.”

Josh Archibald was bloodied when he got a stick in the face, prompting a video review for a four-minute penalty. The tape showed that Archibald was hit by teammate Duncan Keith. The first half was goalless.

Halfway through the second, Zach Hyman threw the puck into the crease. He pinballed behind Jonathan Quick and looked destined to open the scoring, but Andreas Athanasiou pulled him off the goal line.

Topline Oilers raised the forecheck later in the second. Kailer Yamamoto made a jump play to hold the puck on the blue line. A few seconds later, Connor McDavid got behind the net and fed Cody Ceci, who went short on Quick for his first of the series.

“Having the building go crazy like this is a really good adrenaline rush. This is one I will remember for a while.”

The Oilers beat the Kings 24-10 in the second period, including a stretch of 17 straight shots. The 24 shooting in a span set a new team playoff record.

“They play a petty game and they do a good job of getting the disks onto the net and breaking you that way, but we’re sticking with it,” McDavid said.

“We try to put an emphasis on playing the game in a balanced way,” added Woodcroft. “In the last two elimination games we’ve faced, we’ve had habits that have kept themselves under pressure, and that’s a good sign for us as we go forward.”

Josh Archibald had a breakaway a minute from the third but failed to score. Not long after, Yamamoto had a great view of the slot, but shot the post.

It took the Kings more than ten minutes to register a shot on the third, but it was dangerous as Trevor Moore fired a single shot from the right side. Mike Smith crossed to make the save.

“By playing our best game in the series in the biggest (game), you can’t help but gain confidence from it,” Smith said.

“Passing in the first round has been a pivotal point for a while, so I think it’s a big boost for this group.”

With 3min53s to go, McDavid came in behind Sean Durzi, who would be penalized for a penalty during the chase. McDavid kept the puck alive and hit a backhand from Quick to his room.

“This show has pushed us in a way that has made us grow, and we’ve learned a lot about ourselves in the last couple of weeks and the price that has to be paid to succeed this time of year,” Woodcroft said.

Smith made 29 saves for his second series shutout. Fast made 39 stops.

The Oilers will face either the Calgary Flames or the Dallas Stars in the second round.