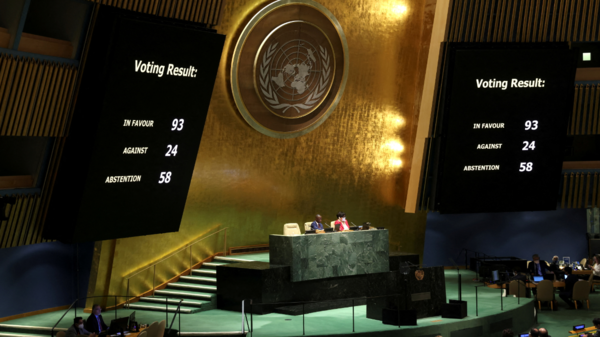 North Korea’s minister of foreign affairs on Monday denounced last week’s suspension of Russia from the UN Human Rights Council, calling it an “unreasonable act” led by the United States and the West to maintain political hegemony.

The US-led push to suspend Russia from the UN body over reports of “gross and systematic violations and abuses of human right” garnered 93 votes in favor, while 24 countries voted no and 58 countries abstained, prompting Moscow to announce it was quitting the body.

For the latest headlines, follow our Google News channel online or via the app.

“What the US is after … is to isolate the independent countries, and forces challenging them at the international arena, so as to maintain its illegal and inhumane US-led hegemonic order,” the minister said, according to a statement carried by state news agency KCNA.

The statement didn’t name the minister.

Noting that North Korea had opposed the adoption of the “double-standard” resolution, the minister said international organizations should not be “abused” as a means for the United States to put political pressure on countries.

North Korea has test-fired a range of increasingly powerful missiles this year, while officials in Seoul and Washington also fear it may be preparing to summarize testing nuclear weapons for the first time since 2017 amid stalled negotiations.

Russia says will go to court if declared in ‘default’ by West: Minister

Zelenskyy believes ‘have of thousands’ killed in Ukraine’s Mariupol