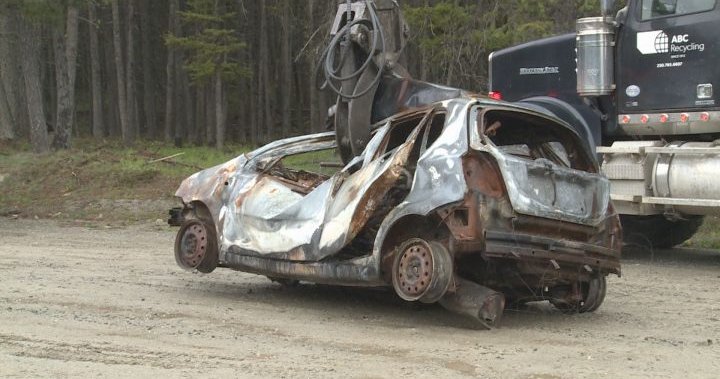 Thousands of pounds of metal and rubbish were once again removed from the Peachland wilderness.

Local nonprofits joined forces Saturday with volunteers for the annual cleanup of the Peachland Basin.

“We took this burned-out car… and a travel trailer,” said Kane Blake, president of the Okanagan Forestry Task Force.

“We are also pulling a large Dodge Ram truck out of a sand pit that was shot and set on fire.”

The Okanagan Forestry Task Force, ABC Recycling, the Peachland Watershed Alliance and the Peachland Fire Department all played a role in the cleanup.

“There were some trespassers in this area over the winter and (they) left quite a mess,” said Captain Eric Tupholme of the Peachland Fire Department.

“We all live in this community, drink water from the basin and stay on the beach. It is very important to give back to the community we all live in.”

About 50 volunteers from the community joined this year’s cleanup, including local resident Nikki Lynn.

She said her family is constantly in the wilderness and giving up some of her time is a small price to pay to help keep BC’s wilderness clean so everyone can have fun.

“This place is our playground, we come here almost every week, it’s upsetting when you see your playground and the things you love get destroyed,” Lynn said.

“We went out of our way a little bit and cleaned up and we hope this encourages other people to come out here and help clean up as well.”