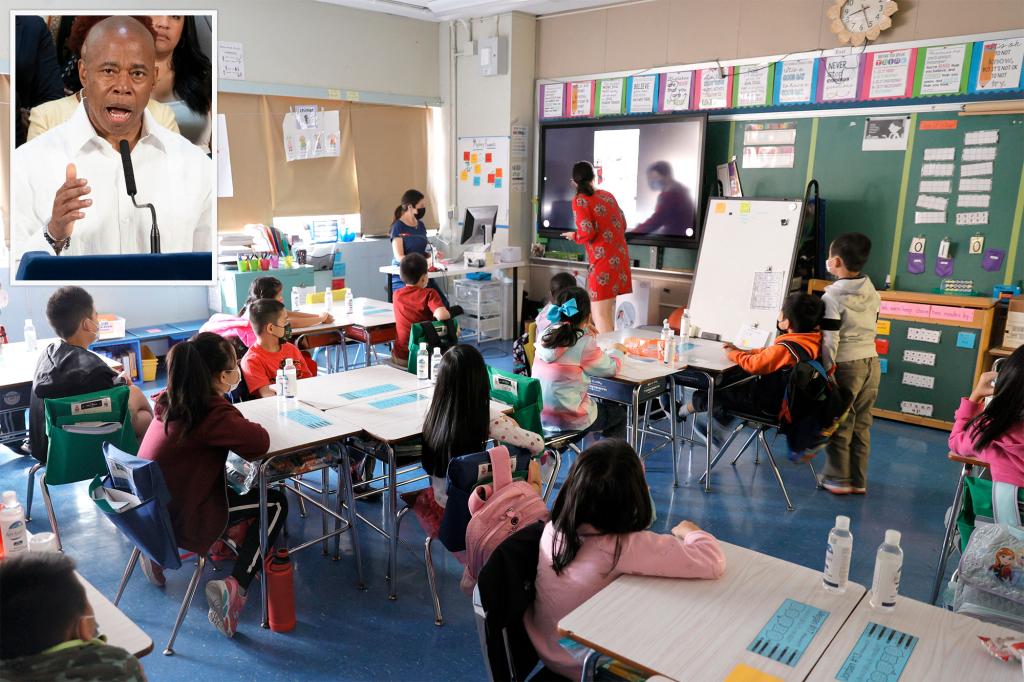 The city’s Department of Education used a controversial budget formula to discreetly reduce the funds New York public schools are expected to receive per student next year, the Post learned.

In an internal memo obtained by The Post, DOE Chief Financial Officer Lindsey Oates told superintendents and principals that per-student funding for the upcoming school year “has gone down a little bit” because the city is spending less on teacher salaries.

“This drop is due to the high number [sic] of teachers retiring, quitting and going on leave last year,” read a June 3 memo.

The DOE said the average teacher salary had dropped, but did not reveal how much across the city.

Some principals and teachers who discovered the per-student reductions while reviewing their proposed budgets said they felt cheated by the DOE, claiming the measures harm children and the school in general.

Mayor Eric Adams has repeatedly said that declining student enrollment at DOE schools was to blame for the slashed budgets totaling millions of dollars.

“No kid is going to lose money on Fair Student Funding,” Adams said, referring to the formula that sets most of each school’s budget.

Each school’s budget allocation under Fair Student Funding is based on the number of students enrolled and their specific needs.

But the city did not publicly disclose that the DOE had reduced the per-student dollars.

Under the DOE formula this fall, school principals will receive a baseline of at least $4,197.19 for each general education student, a minimum reduction of $25.81 per child, the DOE confirmed.

As the dollar amount per student has been reduced, even schools that have not seen their enrollment numbers drop could face a lower budget.

The baseline value is also weighted against other factors, so the value per student may increase based on a child’s individual needs, such as academic help, English learning, or disabilities. But those extra funds will also be cut under the formula.

The Independent Budget Office, a publicly funded watchdog, confirmed that the change will mean less money for schools under the formula.

“If per capita values ​​are reduced, school budgets will be reduced,” said Sarita Subramanian, deputy director of education at the IBO.

Nathaniel Styer, a DOE spokesperson, confirmed that the rate has “fallen” due to a change in average teacher salaries.

But he said the number of students eligible for academic aid had increased, “causing a new cost despite slightly reduced per capita.”

DOE would not provide the additional number of eligible students for these needs.

A former principal at the Queens school told The Post that the DOE’s approach to allocating funds is not prioritizing students.

“It’s kind of like ‘kids last’ in the budget rather than ‘kids first,’” the veteran administrator said.

“Have you ever played a three-card deck?” the former director told The Post, referring to a street game where crooks place cards face down and shuffle them to confuse players.

A Queens teacher who learned of the per-student reduction also accused the city of trying to mislead the public.

“Saying that schools are 100% fully funded has always been a lie,” she said.

The Education Policy Panel is scheduled to hear public comments and vote on the DOE’s estimated annual budget for the upcoming school year on Thursday night.

But a public guide to the Fair Student Funding formula was yet to be published online Wednesday night. (A link to the memo simply said “Coming Soon.”)

At recent PEP meetings, many parents and advocates fiercely opposed the current Fair Student Funding formula which they say harms vulnerable students, including those who are homeless or in foster care. The DOE did not mention the per capita reduction during the hearings.

While most PEP members, particularly those appointed by Adams, ended up voting to pass the formula, School Chancellor David Banks promised to review and “fix this mess” going forward.

“We’re making the right investments in a DOE budget,” Adams said at an unrelated press conference. “There is fat in city agencies, there is a lot of waste in city agencies.”

Overall, the total spend per student averages $28,000, but includes additional costs such as employee pensions and fringe benefits, transportation, food, and building maintenance. Money allocated in Fair Student Funding goes to principals for staff, supplies and other basic school expenses.

“We’ve become addicted to throwing money at something,” Adams said. “No, let’s use taxpayers’ money to produce a better product.”

Amaris Cockfield, a spokeswoman for the mayor, reiterated that the city is contributing more to the education budget for the next school year than it was last year. She said all schools are fully funded under the formula.

“Any other notion without all the pieces of the Fair Student Funding formula is false,” Cockfield said. “The reality is that the average teacher salary across the city goes down or up if and when teachers with a salary range enter and leave the system.”

“Teachers and schools deserve honesty and not speculation.”