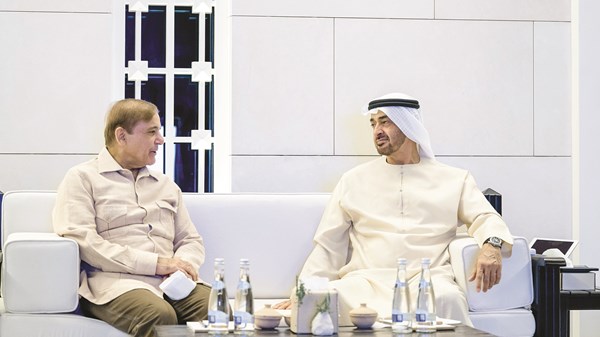 His Highness Sheikh Mohamed bin Zayed Al Nahyan, Crown Prince of Abu Dhabi and Deputy Supreme Commander of the Armed Forces, and Shahbaz Sharif, Prime Minister of the friendly Islamic Republic of Pakistan, discussed the historic relations uniting the UAE and Pakistan. and ways to strengthen and expand their horizons to serve the common interests of the two countries and their friendly peoples in various fields, in addition to a range of regional and international issues of common interest.

His Highness Sheikh Mohamed bin Zayed Al Nahyan, during the meeting that took place yesterday at the Beach Palace, renewed his congratulations to the State of Shahbaz Sharif on his election as Prime Minister, wishing him success in leading the friendly Islamic Republic of Pakistan to more progress and prosperity during the next period. His Highness and the Pakistani Prime Minister exchanged congratulations on the approach of Eid Al-Fitr and best wishes for progress and development for the two friendly countries, the Islamic countries and all countries in the world. His Highness Sheikh Mohamed bin Zayed Al Nahyan highlighted the historic relations that unite the two friendly countries and the valuable contributions of the Pakistani community to the success of the UAE’s development process. His Highness expressed his wishes to achieve peace and stability in the region for the benefit of all, emphasizing that the UAE supports any step on the road to that peace based on its consistent approach of working for peace and cooperation in the region and in the world.