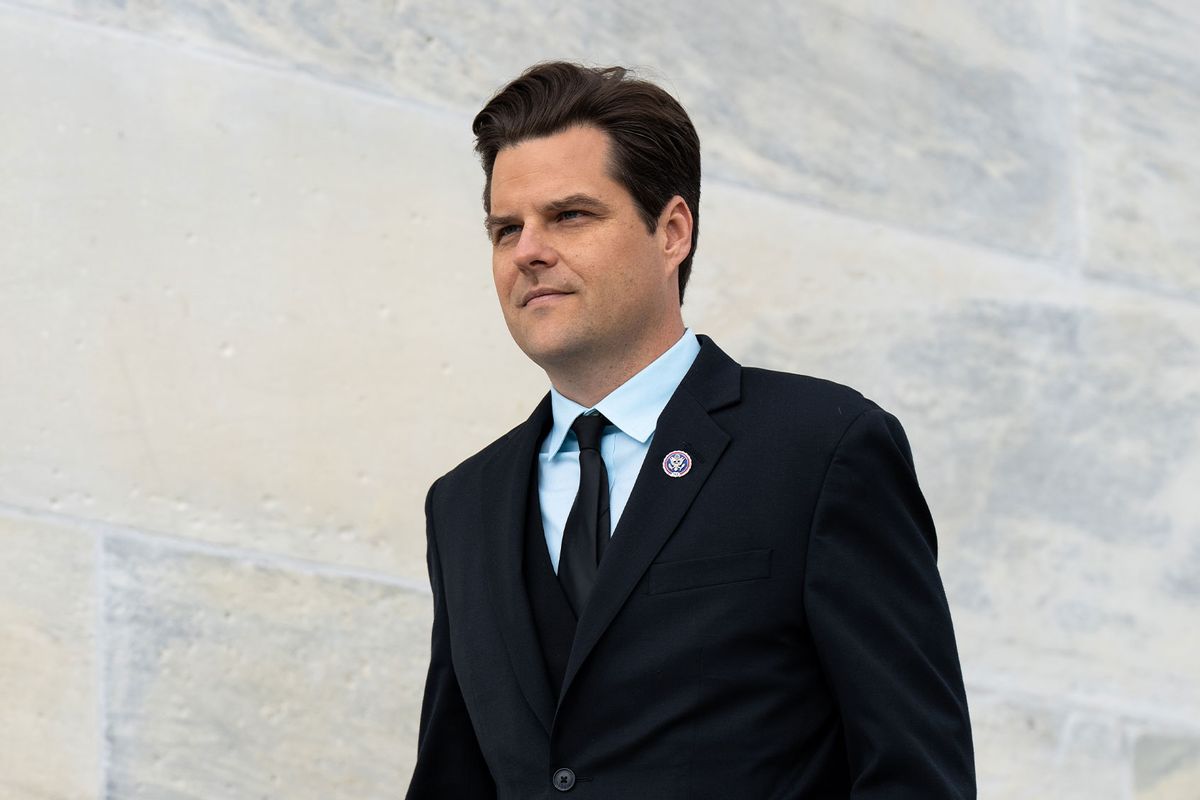 In late March, after the House passed a bill that would cap the cost of insulin to $35 a month for insured consumers, Representative Matt Gaetz (R-Fla.) tweeted about why he voted against the legislation.

“Insulin price increases have more to do with rising consumer demand than Big Pharma’s bad behavior, which I’m quick to condemn,” Gaetz wrote.

He continued, in a 10-part Twitter thread, offering weight loss as a potential solution to insulin costs rather than capping prices: “90-95% of people with diabetes have type 2 diabetes, which ‘ lifestyle changes such as losing weight, eating healthy foods and being active can be prevented or delayed.’ Arbitrary price controls are no substitute for individual weight control. Since 2000, the number of diabetes cases in the US has nearly doubled. Demand for insulin has increased, and the necessary price increase has followed suit. In other words, the price of insulin increases as waistlines increase.”

The tweet garnered attention on social media and in the media, but we wondered if there was any connection between the demand for insulin and the rising cost of the drug. An economic principle states that for some products, if demand increases, prices will follow.

Does this hold true for insulin, a drug that millions of Americans need to survive?

We contacted Gaetz’s office to ask for evidence to support his claim, but we have not received a response.

So we asked the experts to explain what is happening with insulin prices.

Types of Diabetes and Treatment

Insulin was discovered in 1921 and patented two years later. The hormone is essential for people with type 1 diabetes because the pancreas no longer produces natural insulin, which it needs to regulate blood sugar. An extremely high blood sugar level can be deadly. These patients represent about a tenth of the total number of people with diabetes in the country.

Some patients need to inject insulin frequently, at least twice a day.

Most people with diabetes, however, have type 2, which has been linked to obesity. Excess weight can interfere with the body’s ability to use insulin effectively, leading to high blood sugar levels.

“As obesity increases, so does diabetes,” said Dr. Paresh Dandona, a professor at the University at Buffalo School of Medicine who studies diabetes.

But many of these patients do not receive insulin as a treatment. About 30% of people with type 2 diabetes use insulin when other drug options are not successful in treating the condition, Dandona said. For some Type 2 patients, exercise and a healthier diet “may help reduce insulin dose, but do not eliminate its use.”

How does insulin drug pricing work?

Is there any reason the price has gone up?

Not really, experts said, except that manufacturers and other stakeholders benefit from higher list prices. For example, pharmaceutical benefit managers—who manage prescription drug benefits on behalf of health plans—are paid based on the discount amount they receive from insulin manufacturers. If they can negotiate a more favorable location for a manufacturer’s insulin on a drug formulary list (a plan’s list of covered drugs), they receive a bigger discount. Insurers also benefit from higher prices because they charge a greater amount of a patient’s cost-sharing share and can also get discounts from pharmacy benefits managers. In addition, consumers have little bargaining power because insulin is often an essential purchase.

“Insulin manufacturers set prices based on what the market supports, not based on demand for their products,” said Dr. Jing Luo, an assistant professor of medicine at the University of Pittsburgh whose research focuses on drug pricing and usage.

“The discounts reduce what insurance companies pay for insulin by approximately 84% and these savings must be shared with patients at the pharmacy,” said Brian Newell, a PhRMA spokesperson. “Until we fix this broken system, patients will continue to face high costs for insulin.”

While high demand, according to economic principles, can cause prices to rise because it is difficult to sell enough of a product, production is not an issue with insulin because it is easy to increase supplies and there is no set amount. of insulin that can be done, said Matthew Fiedler, a member of the USC-Brookings Schaeffer Initiative for Health Policy. Therefore, the demand for insulin should not affect prices.

Ultimately, the list price of insulin is set by the manufacturers, and they, along with all participants in the drug pricing system, benefit from higher prices, except for consumers who have to buy it to survive, they said. the specialists.

“As we all know, increased demand actually drives up prices,” Luo said. “This is especially true for commodities. Unfortunately, brand-name drugs like insulin are priced very differently than plain products.”

In his Twitter thread, Gaetz said that diabetes cases have nearly doubled since 2000. That’s true.

According to data from the Centers for Disease Control and Prevention, about 12 million Americans were diagnosed with diabetes in 2000. In 2018, the annual number of new diagnoses increased to about 27 million.

But a diagnosis of diabetes isn’t always related to a person’s weight or overall health, especially for those with type 1 diabetes, who rely on lifelong insulin treatment.

“In fact, those with type 1 diabetes are generally very thin,” said Dr. Eron Manusov, professor at the University of Texas-Rio Grande Valley School of Medicine.

Also, most people with diabetes have type 2 diabetes, which is linked to weight gain but is not always treated with insulin.

Other factors may play a role in the risk of developing type 2 diabetes, such as genetics, lifestyle and age, Manusov said.

Relieving and treating diabetes isn’t as simple as eating healthier and exercising more, Dandona said. These factors can “help control diabetes and reduce insulin dose, but it doesn’t eliminate its use,” he said.

If everyone ate the same healthy diet and exercised the same amount, some people would still become diabetic because a person’s genes and the environment they grew up in matter, he added.

The experts concluded that while insulin list prices and diabetes cases have increased over the same timeline, they are not related.

“While higher rates of obesity likely increased the prevalence of diabetes, it is doubtful that this had much of an effect on insulin prices,” said Fiedler, a health economist. “Also, obviously, none of this is to say that reducing obesity or reducing diabetes is a bad thing. It just doesn’t have much to do with insulin prices one way or another.”

How is Congress approaching insulin pricing?

The House bill would cap the cost of insulin at $35 a month for individuals who have private insurance or those on Medicare. However, the bill does nothing to help the uninsured who need insulin.

Democrats unanimously supported the legislation, as did 12 Republicans. But there was significant opposition, with 193 Republicans voting against, including Gaetz.

The bill now heads to the Senate, where members are considering other strategies to control insulin prices. Details are in the works.

Gaetz said the reason for the rising cost of insulin was because more people were being diagnosed with diabetes, thus increasing demand for the products. And he linked this rise in diabetes to the rise in the number of overweight people in the US.

Health economists and diabetes experts have told us that while Gaetz is right that diabetes is on the rise, his overall point is not accurate. His claim is based on a cause and effect argument that does not exist.

They said the rise in insulin prices is not linked to the high demand for insulin or any production problems the pressure creates.

Also, while the price rises come as more cases of obesity are reported, medical experts said they are not necessarily related. Many people who are overweight and develop type 2 diabetes are not treated with insulin, and experts point out that many other factors help determine whether an individual will develop diabetes.

We classify this statement as False.