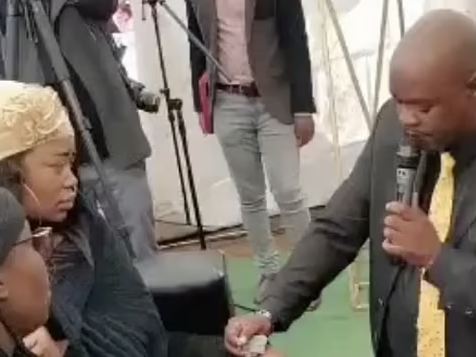 A guy in South Africa thought it would be a good idea to ask his girlfriend the question – during her father’s funeral.

The moment was captured by many in attendance, but the groom-to-be shared the video on TikTok itself.

The video’s caption reads: “Proposing [to] the daughter of the deceased right at the funeral. Wiping the tears here and there.”

The footage begins with Mojela on one knee, inches from the coffin, speaking into the microphone, proposing to his girlfriend during the service before placing a ring on her finger.

Some members of the congregation can be heard screaming in alarm.

The man is reportedly heard thanking God for being in his girlfriend’s life during her difficult time.

The woman is seen collapsing, though she’s not sure if it’s the emotions of the proposal, grief over her father’s death, or sheer embarrassment at what was actually happening.

Commentators were quick to respond, with many calling it a “wrong” scam.

“Aowa this is WRONG.. No matter how you try to justify it,” wrote one woman.

Another commented: “This is absolutely out of order, you shouldn’t have allowed this.”

A third person wrote: “I feel like he should have waited for the funeral to pass…how do you rejoice when you are in such deep pain?”

However, some think the gesture was romantic.

“Personally, I don’t see anything wrong,” commented one person. “He’s just trying to wipe the tears from this family. It was a brave thing to do.”

Another called Mojela a “legend”, adding: “I know you are going through a lot of pain but I can take it from here, I can be your man, protector, provider, healer, guide.”

One woman summed it up perfectly, however.

“For those who are mad about it… the girl said yes… no matter what anyone might say now.”