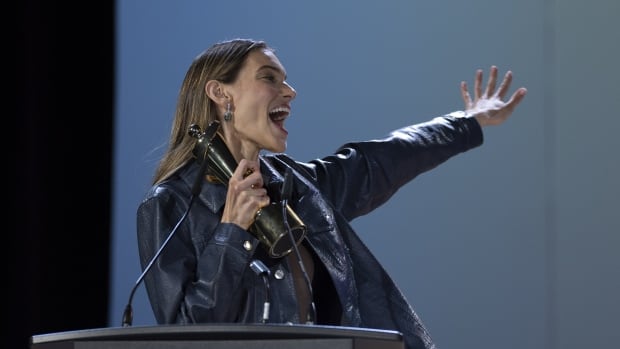 Charlotte Cardin and The Weeknd were among the big winners at the Juno Opening Night Awards in Toronto on Saturday, with over 40 awards in various categories.

Streamed live from the Metro Toronto Convention Centre, the ceremony was hosted by CBC’s The block presenter Angeline Tetteh-Wayoe and Canadian comedian Ann Pornel. The second night of the Juno Awards will take place on Sunday night and will be broadcast live on CBC.

Cardin from Montreal won three awards, including single of the year, pop album of the year for Phoenix and artist of the year. Cardin also had the most nominations of the night.

“This is so special to me,” she said after winning artist of the year. “I’ll keep working hard.”

“It’s the most beautiful gift. There are no words to describe this feeling. I released this album with great, great pride,” she said of her second release.

Toronto singer-songwriter Mustafa, who won an Alternative Album of the Year Juno for When the smoke risesaccepted his award in recognition of the loss of his friends in the Regent Park neighborhood.

“Being first of anything should now be criticized more than celebrated.”

The artist added that he is in good company in the Canadian songwriting community. “I feel so privileged to come from a legacy – or to be in a nation that has a legacy of great songwriters.”

Toronto’s The Weeknd won two awards, choosing Contemporary R&B Record of the Year for take my breath and songwriter of the year.

It was also a night to recognize some of Canada’s most prolific names in music. Denise Jones, who passed away in 2020, was honored with the 2022 Walt Grealis Special Achievement Award for championing Canada’s Afro-Caribbean culture.

His sons Jerimi and Jesse, who accepted the award on his behalf, noted that his mother was the true embodiment of hope and was the reason Junos introduced a reggae category in 1985.

“My brother and I stand before you tonight as testimonies of the love, guidance and wisdom bestowed on young people,” Jeremi said.

“I just know how lucky I was. This wasn’t the plan when I moved here – and look!”

This year’s Juno nominees list was among the most diverse in history, with a handful of newly graduated winners taking the podium to collect their awards.

R&B artist Savannah Ré won the Traditional R&B/Soul Record of the Year award for the second time in a row — the category was only introduced in 2021.

She named Canadian singer-songwriters Melanie Fiona and Deborah Cox as women who helped her throughout her career.

“I’m huge fans of these women and they’ve been nothing but open and welcoming, so I’ll always do the same. I’ll always pay it forward.”

Garth Prince, a Namibian-Canadian musician whose album falling in africa won children’s album of the year, grew up under apartheid in South Africa.

Songs inspired by that experience resonate with Canadians and people around the world who are losing their language and culture to colonialism, he said.

At previous Juno Awards, there was only one category for indigenous music. This award has now been split in two – one for traditional and one for contemporary.

DJ Shub, the first winner in the latter category, is a former student of electronic group A Tribe Called Red.

Thirteen-year-old Kairo McLean took home the reggae record of the year for his album easy now. The young musician said his plan is to keep making music and “improve from here”.

Contemporary R&B Record of the Year
take my breathThe weekend

Jazz Album of the Year (solo)
Change of plansWill Bonness

Innovative group of the year
monowhales

Classic Album of the Year (Big Set)
solfege, The Harmony of the Seasons, conducted by Eric Milnes ft. Helen Brunet

single of the year
MeaninglessCharlotte Cardin

Dance recording of the year
CautionKaytranada

Children’s album of the year
falling in africaGarth Prince

Instrumental album of the year
That high distanceDavid Myles

Alternative album of the year
When the smoke risesmustafa

Traditional R&B/Soul Record of the Year
24 hoursSavannah Re

Adult Alternative Album of the Year
In and forwardHalf Moon Race

country album of the year
What is life?Brett Kissel

Francophone Album of the Year
impossible to lovepirate heart

rap single of the year
BOLDcharm

Metal/hard music album of the year
bleed the futurearchspire

video clip of the year
easy for me (Adele), Xavier Dolan

composer of the year
The weekend

Traditional indigenous artist or group of the year
Kakikefawn wood

Artist of the Year
Charlotte Cardin