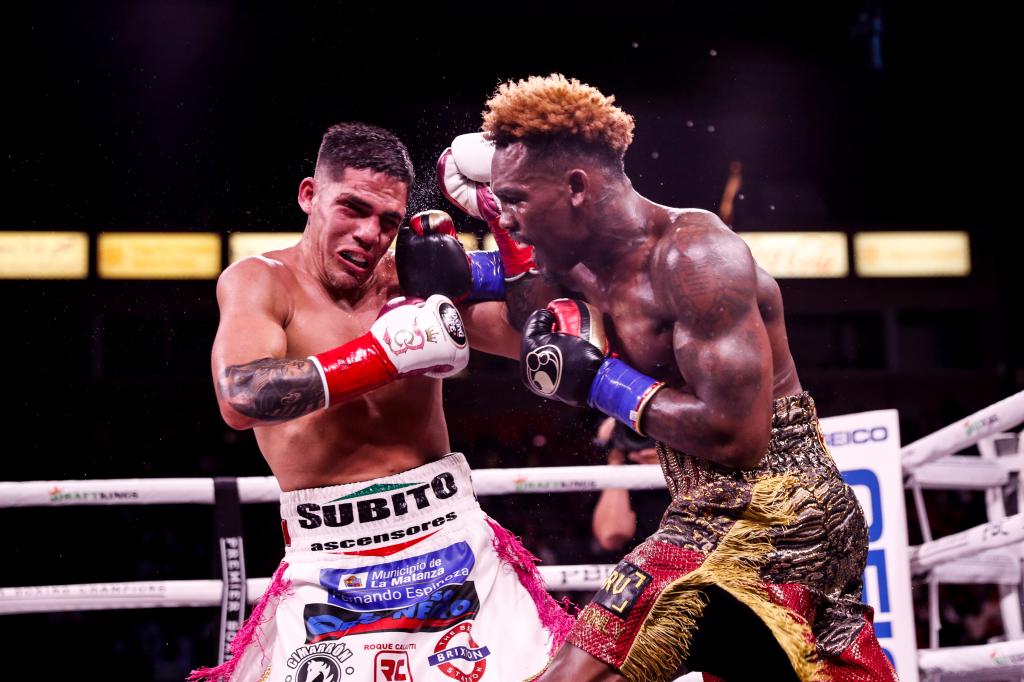 CARSON, Calif. — Jermell Charlo became the first undisputed super welterweight champion of the four-belt era when he defeated Argentine Brian Castaño in the 10th round of the rematch Saturday night.

After an excellent fight with ample toe-to-toe action, Charlo (35-1-1, 19 KOs) took down Castaño twice in quick succession on 10th. Charlo jumped to the ropes in celebration while the referee was still counting his opponent, celebrating the addition of Castaño’s WBO 154-pound title to his WBC, WBA and IBF belts.

Charlo survived several impressive opening rounds by Castaño (17-1-2) in the fighters’ tie rematch 10 months ago in Texas. Charlo is only the seventh fighter to simultaneously hold every major title in any weight class since the four-belt era began in 1988.

Castaño’s aggression and Charlo’s sharp responses led to big exchanges in nearly every round, highlighted by a sensational fifth round of relentless action. Castaño’s early pace slowed in the middle rounds, and Charlo finished dramatically at 2:33 of the 10th.

After catching Castaño with a right uppercut and a left hook for the first knockdown, Charlo took Castaño down again seconds later with two left hands to his head and a left to his body, leaving Castaño on the canvas.

After undefeated Philadelphia welterweight Jaron Ennis stopped Custio Clayton with a vicious right hand in the second round of the show’s penultimate fight, the main event was delayed a bit because Castaño showed up late to the arena, according to the fight’s promoters.

Traffic and parking were terrible around the sports complex, which hosted a Major League Soccer LA Galaxy match at the same time as the fight card in the tennis arena that shares the property with the football stadium, but it was unclear. if that was the reason Castaño was late.

Both fighters left eager for exchanges, with Castaño again pressing and Charlo deftly counterattacking. Charlo was sharp on the ropes, but Castaño got the better of him in the back and forth action during a thrilling fourth round.

The fifth round was even better, with devastating shots from both fighters. Charlo then bent Castaño’s knees with a massive left hand in the seventh, but Charlo curiously didn’t move to chase a finish.

After all, Charlo had a better plan.

Charlo’s victory is a landmark moment in the history of the best fighters between middleweight and welterweight.

The 154-pound division was created in 1962, and talent ranging from Thomas Hearns and Terry Norris to Felix Trinidad and Winky Wright have excelled at weight. But no boxer had won every major title at super welterweight since the WBO formed and ushered in the four-belt championship era in 1988.

Charlo won his first version of a 154-pound title in 2013 and clinched the WBC belt in May 2016. He lost to Tony Harrison in December 2018 but bounced back with a KO win in the rematch and quickly added the WBA and Belts. IBF stopping Jeison Rosario in September 2020.

Castaño has built an impressive career fighting in Buenos Aires, although he has been training in Los Angeles since January. He held versions of the WBA 154-pound title for three years before claiming the WBO handle last year.

Castaño came agonizingly close to an impressive comeback in his first meeting with Charlo last July. Despite his disadvantages in height and reach, Castaño constantly pressed and forced Charlo to counterattack less attractively.

But the judges couldn’t decide, with one scoring for each fighter and the third seeing a draw. Neither belt changed hands and the fighters scheduled a rematch for February – but Castaño tore his bicep muscle and demanded a delay.

Ennis (29-0, 27 KOs) underlined his status as an elite welterweight with a violent victory in a rally of undefeated contenders. Clayton (19-1-1) went down in a pile after Ennis’ slashing right hand, and the Canadian was left on shaky legs before the bout was waived.

“I keep telling you all over and over again: We’re in and out like a robbery,” Ennis said. “We are not paid for overtime.”

After an impressive debut in California, the 24-year-old Ennis is waiting for an opportunity to face elite welterweights like Errol Spence Jr., who took part in this fight.