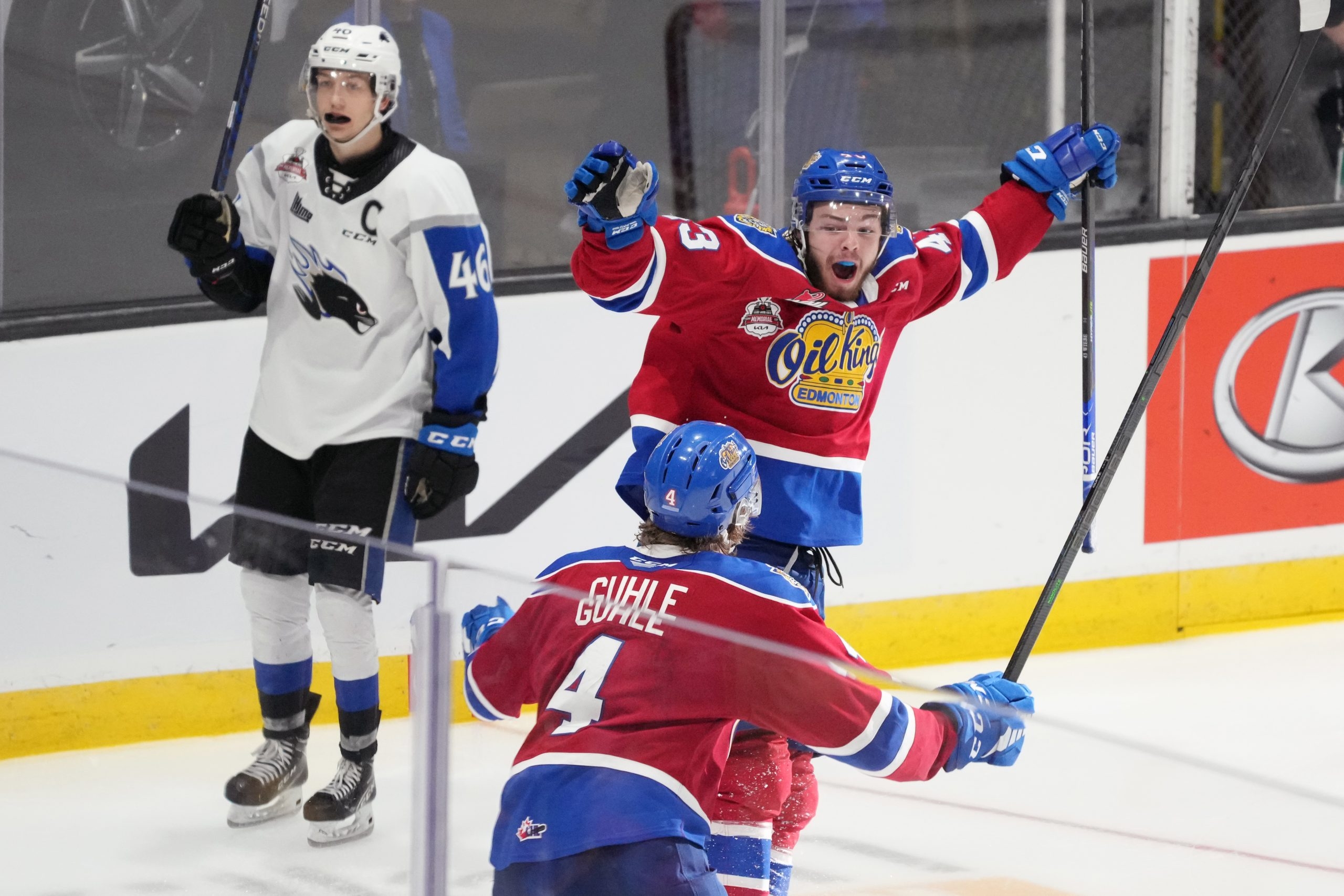 SAINT JOHN, NB – WHL champion Edmonton Oil Kings is back in action in the 2022 Memorial Cup.

The Oil Kings scored a 4-3 overtime victory against hosts Saint John Sea Dogs at the Harbor Station arena on Wednesday to keep their championship hopes alive.

Jaxsen Wiebe scored the winning goal of overtime at 8:05 to complete his hat-trick in a three-on-three format. With the win, the Oil Kings earned two points in the standings, while the Sea Dogs received one for the overtime loss.

“After a loss your group has to come back stronger and I thought we did that, it was a total group effort,” Wiebe said. “Our guys came to battle and we were rewarded for it.

“It’s special to score three goals but our entire group left tonight and I couldn’t be more proud of our reaction after the game (Tuesday). Let’s take this one and get ready for Hamilton.”

The Oil Kings lost their opening game of the tournament to Shawinigan Cataractes on Tuesday and were looking for the last goal if they had lost the second in a row.

Wiebe, however, had the game of his life, which included a first period fight against Sea Dogs forward Riley Bezeau.

Wiebe scored the winning goal in overtime in a run down the right wing, hitting a shot over the shoulder of Sea Dogs goalkeeper Nikolas Hurtubise. It was Wiebe’s first junior hat-trick.

Carter Souch made another for the Oil Kings and goalkeeper Sebastian Cossa made 36 saves.

“I think it started in the corner and Ghules (defender Kaiden Guhle) gave me an advantage,” said Wiebe. “There’s a lot of space to skate overtime and I thought I could put my own skate in there. I slipped through the wing and just pulled the trigger and luckily he went in.”

Just before the tournament, the CHL announced a new points system, awarding three for a regulation win, two for an overtime win, and one for an overtime loss. They also introduced the new overtime format, which would be three on three until a winning goal was scored.

“I think it was a tremendous showcase for the CHL and the Memorial Cup,” said Sea Dogs coach Gardiner MacDougall. “It was distressing for our team because they worked so hard, but I thought there were a lot of positives.

“We knew they were going to come out strong early on and we lost 2-0 and we had the courage to come back and I thought it was an excellent response to go up 3-2. So when you get to three against three, it’s a three against three. top notch and both teams had tremendous opportunities. I thought the two goalkeepers made some unbelievable saves.”

Raivis Kristians Ansons, Josh Lawrence and William Dufour all scored for the Sea Dogs, while Hurtubise made 27 saves.

Oil Kings forward Justin Williams managed to beat his man on the outside and sent a backhand pass up front to Souch, who swept into the net. Souch finished with a goal and two assists.

“I think it was a really good team effort by everyone tonight,” said Souch. “Jaxsen was amazing. This is his first junior hat trick; I only have it so he’s tied with me, but it’s pretty crazy that he got one in the Memorial Cup.”

The Sea Dogs were able to fight back in the competition, coming up with a goal six minutes into the first period when the puck bounced to Ansons up front and he slid past Cossa’s pads.

Saint John then equalized 25 seconds later as Lawrence was credited with the goal after it bounced off the skate of Oil Kings defender Simon Kubicek up front.

Dufour put the Sea Dogs up 3-2 midway through the period when he landed a shot on the short side past Cossa.

“We had a difficult start but we managed to recover immediately and that was good for our team,” said Dufour. “We showed some character. We had a few chances in overtime, I made it two on one and I could have finished that game, but Cossa made a great save and that’s why he was called up in the first round of the NHL, he’s a very good goalkeeper.”

The Oil Kings drew 3-3, two minutes into the second half, when Wiebe scored on the power play. He managed to catch the puck after Souch hit the goal post, cut into the net and lifted his backhand past Hurtubise.

Brendan Kuny came close to giving the Oil Kings the lead at the end of the period, but shot the bar.

Things got tighter for the rest of the period after the frantic first 10 minutes of competition.

In overtime, the Oil Kings had the most chances before Wiebe’s game winner. Edmonton beat Saint John 7-5 in overtime with three splits.

“I thought we got off to a good start, got through the first period and enjoyed the second,” said Oil Kings coach Brad Lauer. “I thought we were a little tired of playing last night, but I thought our guys did the right thing at the right time. And I really enjoyed our extra time, I thought we had a lot of chances and we did a lot of good things.”