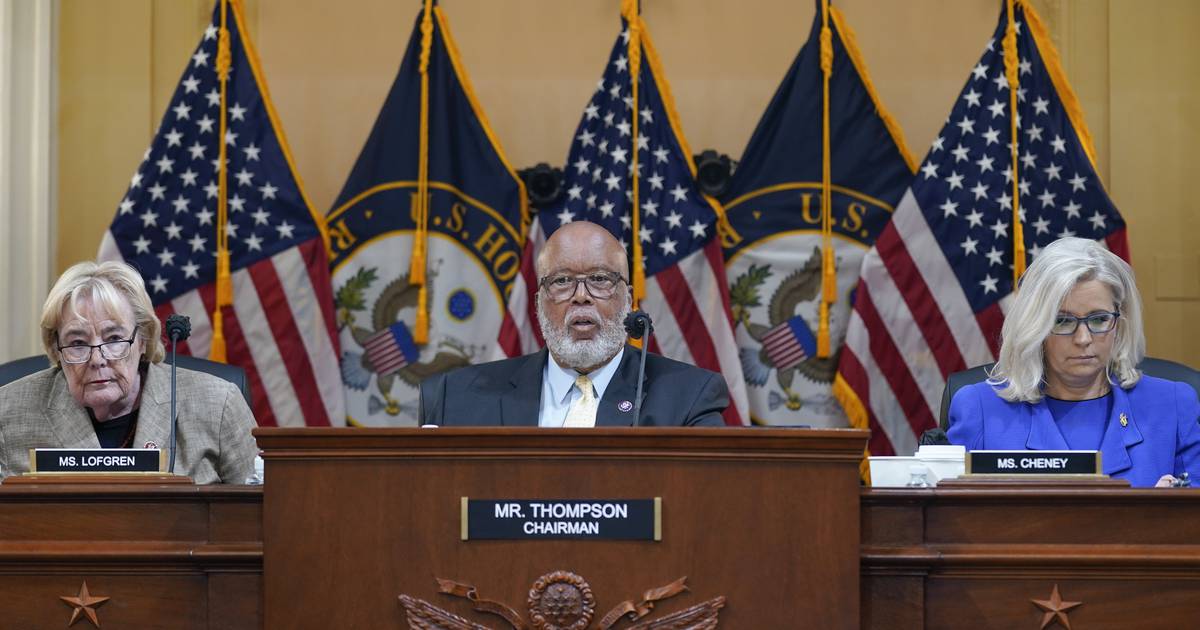 The first televised hearing of the House special committee investigating the January 6, 2021 siege of the U.S. Capitol began Thursday night with powerful denunciations of former President Donald Trump — amid mixed perspectives on whether the panel will do so. justice over the unprecedented attack on democracy.

“Donald Trump was at the center of this conspiracy and ultimately … spurred a multitude of domestic enemies of the Constitution to march across Capitol Hill and subvert America’s democracy,” said Representative Bennie Thompson (D-Miss.), chair of the special committee. .

“Jan. 6 was the culmination of a coup attempt,” he continued. “The violence was not accidental. It represents President Trump’s last stand, the most desperate chance, to stop the transfer of power.”

The upcoming hearings will detail a “seven-part plan” to overturn the 2020 election and keep Trump in power, according to Representative Liz Cheney (R-Wyo.).

“He did not condemn the attack. Instead, he justified it,” she said of the former president.

Furthermore, upon being told that some of his supporters were calling for former Vice President Mike Pence to be hanged, Trump said they might have “got the right idea,” Cheney reported in one of several stunning moments during the hearing. .

The committee showed clips of never-before-seen interviews with former Attorney General Bill Barr and Ivanka Trump, the former president’s daughter and one of his top advisers.

Discussing Trump’s attempt to brand the election as stolen from him, Barr called the effort “bulls-t.” In a separate interview, Ivanka Trump said she accepts Barr’s views on the election.

The hearing featured testimony from US Capitol Police officer Caroline Edwards, who was critically injured during the siege, and documentary filmmaker Nick Quested, who recorded members of the far-right Proud Boys as they attacked the Capitol.

Edwards described the injuries she sustained during the riot and subsequent efforts by the right to defame her.

“I’ve been called Nancy Pelosi’s dog, called incompetent, called a hero and villain,” she said. “I was called a traitor to my country, my oath and my Constitution. In fact, I was none of those things.”

The hearing — broadcast on all major networks with the marked exception of pro-Trump Fox News — came at the end of a nearly year-long investigation into the Capitol Hill attack as lawmakers convened to finalize the 2020 presidential election.

The committee of seven Democrats and two Republicans interviewed more than 1,000 people and subpoenaed key members of the Trump administration, although the former president’s allies have fought the lawsuit tooth and nail.

Central aspects of the January 6 siege are not in dispute. Trump was seen on television angering thousands of his supporters gathered near the White House. They came together after the former president raged for weeks that Democrats stole the 2020 election from him — a claim that has repeatedly flopped in court.

“We fought like hell. And if you don’t fight like hell, you won’t have a country anymore,” the 45th commander-in-chief said in one of the quotes highlighted by Democrats who ended up impeaching for inciting the attack.

After the speech, hundreds of Trump supporters stormed Capitol Hill in an attempt to stop members of Congress from certifying President Biden as the winner of the election. Four people died during the attack and five police officers died afterwards.

The special committee described Trump as an enemy of democracy, with Cheney saying he wanted to “destroy” the government.

Videos highlighted the split inside the White House in January, with some officials described as encouraging Trump to try to overturn the election and others resigning in disgust over the January 6 riot.

While the House impeached Trump – for the second time during his presidency – for his role in the siege, the equally divided Senate voted against punishing him. Since then, the Justice Department has charged more than 800 people with crimes related to the attack, according to NPR.

Republican leaders tried to undermine the investigation almost from the start. After blocking the creation of an independent commission, House Speaker Nancy Pelosi (D-Calif.) rejected two GOP nominees for the special committee, citing their “statements and actions” against Congressional approval of the presidential election results. of 2020.

“It’s the most political and least legitimate committee in American history,” he told a news conference.

Cheney – one of just 10 Republicans who voted to impeach Trump last year, making her an outcast in the GOP – had harsh words for members of his party who supported him.

“I say this to my fellow Republicans who stand for the indefensible: There will come a day when Donald Trump is gone, but his dishonor will remain,” she said.

The hearings evoked comparisons to the 1973 and 1974 congressional hearings that investigated the Watergate break-in, which created a public reckoning and led to the resignation of former President Richard Nixon.

But with many Trump supporters staunchly opposing the committee’s work, it was unclear on Thursday whether the panel had the power to change anyone’s mind.

Thompson expressed hope that the hearings would reinforce democracy.

“We cannot sweep what happened under the rug,” he said. “The American people deserve answers.”

“We will remind you of the reality of what happened that day. But our work must do much more than just look back, because our democracy remains in jeopardy,” Thompson added.