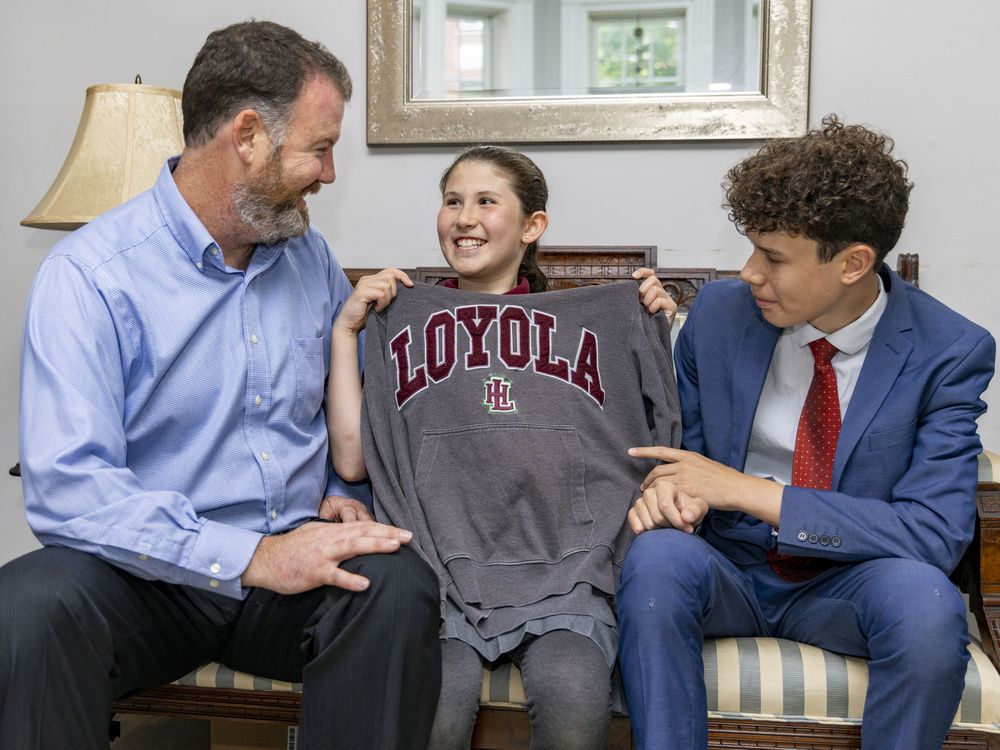 Despite being only 10 years old, Emily Noble always feels right at home when she visits Loyola High School, the all-boys high school in Notre-Dame-de-Grâce.

The Jesuit private school educated four generations of his family – from his older brother Noah to his great-grandparents in the 1910s and 1920s.

During a visit in 2016, when her grandfather Paul Cambell Noble was inducted into Loyola’s Hall of Merit, Emily saw class photos of her uncles and other male relatives that adorn the walls of the 125-year-old school.

“She was running through the halls saying, ‘Dad, it’s so much fun here. It’s great, but I only see boys on the wall. Can I go here too?” her father, Mark Noble, recalled.

Back then, the answer was a definite no.

But, unbeknownst to Noble, the Jesuits of Canada and Loyola’s board of governors were already considering admitting girls.

A declining birth rate in Quebec and English eligibility rules would lead to enrollment problems in the future, but as women took on more leadership roles in society, the school believed it was time to offer girls a Jesuit education as well. .

After lengthy discussions with her alumni, teachers, mother and father association, Loyola announced last month that she will admit the first cohort of girls in secondary 1 in the 2023-2024 academic year.

“When we learned about this two years ago, it was a relief that the choice (of high school) was made for us,” Noble recalled in an interview.

“My cousins ​​and brothers are elated at the idea.” Emily’s grandfather, who passed away in March, also thought it was a “great idea.”

Noble said he always felt that Loyola was different from other schools because it’s not just focused on academics. His Jesuit and Catholic education focuses on the development of the whole person. When they graduate from Loyola, many students are intellectually curious, compassionate, and committed to building a better community, Noble said.

“While Loyola’s core mission has remained the same since its founding, the culture and experience of our students has consistently changed from one generation to the next, and we must ensure that we continue to update our pedagogical approach to the times,” the school said. in a statement.

The school has applied to Quebec’s education department for permission to open a French section in 2025 and is planning a fundraiser to upgrade its sports facilities. Currently, Loyola has 690 students. The school distributes around $750,000 in scholarships each year.

To implement Loyola’s new mission, the Jesuits began looking for a leader who could usher in a new era and open doors to young women.

Marcelle De Freitas was working at the University of Toronto in 2020 when a colleague asked if she knew anyone interested in a leadership role at a Jesuit school in Montreal.

She thought briefly if she knew anyone who would like to move to Montreal and then wondered if the post was something she should explore.

She made a cold call to Adam Pittman, a Jesuit who works at the school, and they talked for about an hour. Pittman suggested that she contact the chairman of the school’s board of directors. A few months later, she was hired as Loyola’s first female president.

In an interview with the Gazette, DeFreitas said the logic of teaching boys and girls separately is no longer true.

“Looking back in history, there was a time when men educated men to be business and community leaders,” she said. “Society has changed and we see women in leadership often now. It’s a mixed world.”

During conversations with DeFreitas about upcoming changes, some current students wondered if the girls would sit with them in the cafeteria, attend school dances, or understand their mood.

One student expressed concern that some girls may not like the pranks or teasing some of the boys engage in.

“Will the girls find it funny the way we joke and make comments to each other?” asked a student.

Many said they would welcome girls and others suggested that the school would need to hire more female teachers to make the girls comfortable.

As Loyola’s teacher and president of the school’s alumni association, Chris Hain has heard from many current and former students about the school’s change in direction.

“There was a mixed response. Some, like me, were excited because I have a niece coming here,” Hain said.

“But others were apprehensive. It is a testament to how protective they are towards the school and what they have experienced. When you go to school during your formative years, you want to preserve that special place that made you the person you are.”

The school will hold an open house on September 17 for students and parents. Eligible English language students, regardless of gender, education or religious belief, can apply.

In addition to enrolling in music and art classes, Emily said she is thrilled to be the first girl in her family to apply for Loyola.

“My father always told me that his brothers went there and his father went there,” she said. “It feels like a tradition, so I feel like going too.”

Sign up for our new parenting newsletter at montrealgazette. com/newsletters.