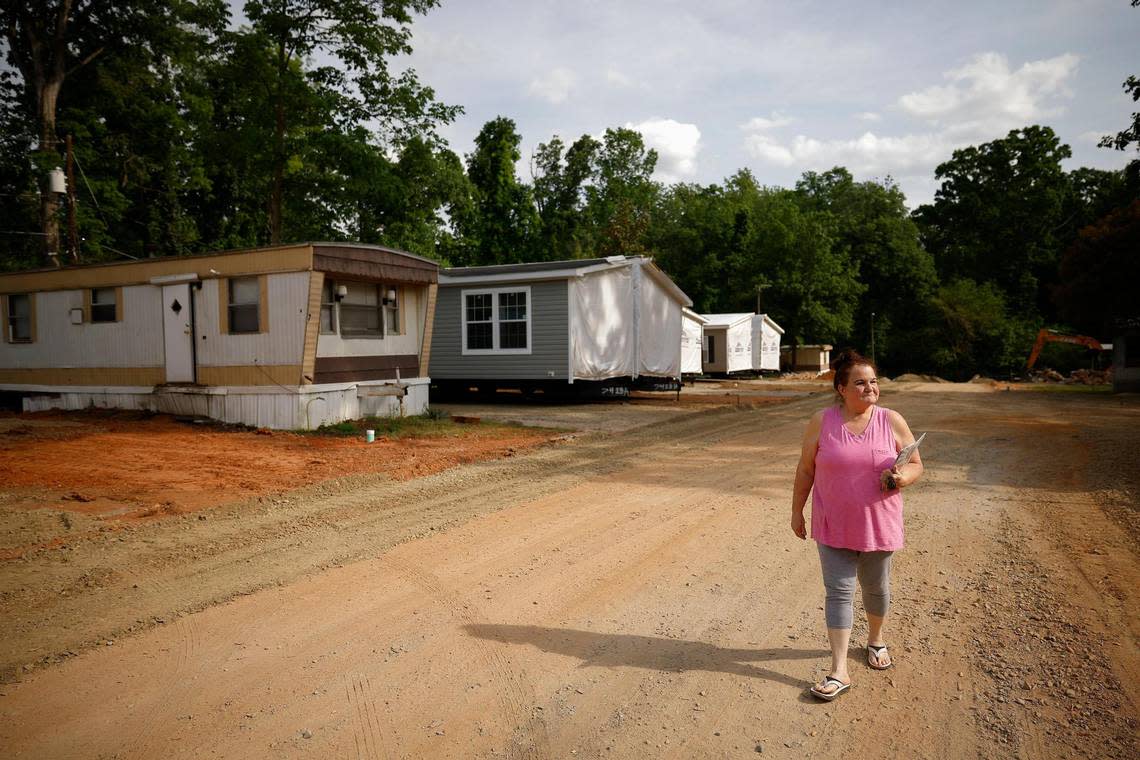 Mobile home parks have been a reliable source of affordable housing in Charlotte for decades, offering prices well below apartments or homes nearby. But a confluence of factors, including rising land prices and an influx of investors looking to make money buying parks, threatens that way of life. New reports and data analysis from The Charlotte Observer show how, in the midst of the city’s growing affordable housing crisis, this remaining haven has come under siege.

For the first time in half a century, Stacy Sprinkle’s family will soon no longer call Countrywoods Mobile Home Park home.

She has watched the community in North Charlotte grow and change since her father bought the two-bedroom, one-bath home in 1972, when she was 13 years old. Since then, she has lived here several times, most recently returning to care for her elderly mother.

The park at WT Harris Boulevard and Old Statesville Road was well-connected and accessible, Sprinkle said. Many families have lived there for a decade or more.

“There were a lot of neighbors,” she said. “Everyone knew each other’s children or friends.”

But in August, the park was sold to Raleigh-based Countrywoods Community LLC, which is linked to an upstate New York company that owns several trailer parks.

First, the company increased rents on the lots, but initially assured residents that they wouldn’t have to move if they kept paying.

Then notices started coming in that their monthly leases would not be renewed.

Everyone had to go.

Sprinkle says they have faithfully paid the rent on the lot, even though the most recent increase to $407 a month has stretched her budget, which is mostly covered by her and her mother’s Social Security benefits.

The rest of the two dozen families in Countrywoods, who didn’t own their home like Sprinkle’s, but rented out both their location and their residences, were also told earlier this year that their leases would not be renewed.

Sprinkle, 63, has watched family after family move, with a deadline in May.

“I will probably be the last (to leave),” she said, surveying the now-empty park on a recent afternoon, where few traces of life remain.

What remains: Christmas lights hanging from empty houses. Children’s bicycles in the front. Potted plants roasted by the sun.

Where once there were rows of rectangular houses, there is now a combination of derelict houses yet to be demolished, freshly turned soil where demolished ones once stood, and larger and more expensive new manufactured houses that will replace them.

“It just blows my mind,” she said. “Before, people rented here and it was affordable for us. Most of us don’t have a lot of money,” she said of Countrywoods residents.

“Then they move these new trailers and wow,” she said. “It’s something to see that after all these years.”

Representatives for KDM Development, the New York company, did not respond to telephone or email requests for comment.

An analysis by The Charlotte Observer of local property records shows that about 20 parks — or about a third of the parks in Mecklenburg County — have changed ownership in the past five years, including several that were purchased by out-of-state companies. and big investors.

Packing half a century of life has been a stressful endeavor, she said. Most family photos, showing generations of special occasions and everyday life, are already off the walls. The moving boxes are stacked in the living room, where Sprinkle sleeps on the couch or an air mattress so his mother and son can occupy each of the rooms.

“It’s been difficult,” she said. “It’s been a lot of stress and strain.”

Sprinkle laments the improvements they painstakingly saved so they can’t maintain – new floors in the kitchen and hallway and repairs to the bathroom to make it more accessible to his 82-year-old mother.

Even if the family owns their house, they cannot take it with them. Mobile homes built before 1976 cannot be relocated, according to the US Department of Housing and Urban Development code, which sets construction and safety standards for manufactured housing.

While residents often use the terms mobile, manufactured, or sometimes trailers somewhat interchangeably, these classifications are important.

Anything built after 1976 is a manufactured home and can be relocated. Sprinkle is not.

Now Sprinkle is working to buy a nearby fabricated home that a former Countrywoods resident had rented, racing to obtain the permits and funds to move it to a nearby park.

But that comes at a price.

It can cost between $5,000 and $10,000 to move the house and restore water, sewer and other services to make it livable. This will come from the money Sprinkle was saving for a new car. She plans to stay until the end of the month with her family.

“I’ll stay until the last minute,” she said.